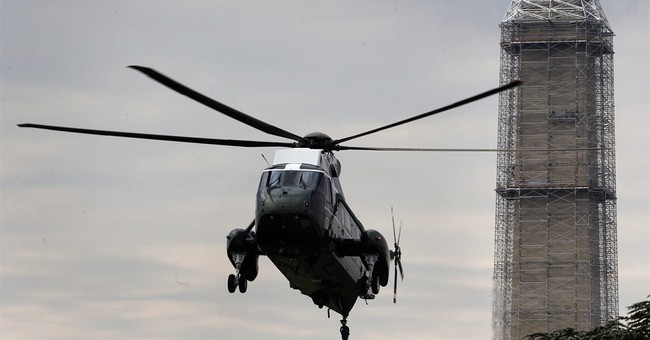 In reporting on the Navy’s reported new acquisition of helicopters for the president to be delivered in 2020, The Washington Post opens:

The last time the Pentagon tried to upgrade the president’s coolest ride — the fleet of helicopters that drop him at his doorstep on the South Lawn of the White House — it didn’t go well. Costs doubled. Delays sparked ridicule, then outrage. And President Obama, then just a few weeks in office, said it was “an example of the procurement process gone amok” before defense officials killed the program outright.

It was an embarrassing debacle that cost $3.2 billion and produced no usable helicopter, turning an iconic symbol of presidential power into an illustration of government waste and incompetence.

There is much huffing and puffing by Navy officers and elected officials that such a debacle will not recur — and it may not. And yet… Gizmag reports that this is “initial US$1.24 billion contract is for six S-92 helicopters and two trainer simulators for the US Marine Corps as part of a development and conversion program that will see a fleet of 21 aircraft built for presidential use by 2023.”

$1.24 billion is a lot of money. For six helicopters and two simulators.

Then, presumably, many more dollars to scale up to 21 “aircraft built for presidential use.”

This columnist might find no sum excessive to protect the United States of America from (to appropriate and adapt a phrase from MoveOn.org) the three most frightening words in the English language, “President Joe Biden.” Yet … the delivery of these craft will occur much too late to fulfill such a noble mission.

To transport one president?

Sounds amok to this columnist.

Meanwhile, back on Earth, Forbes.com contributor Brid-Aine Parnell reported here in March that a Massive Solar Superstorm Narrowly Missed Blasting The Earth Back Into the Dark Ages.

As we blithely went about our lives on July 23, 2012 … intense eruptions from the surface of the Sun … sent a pulse of magnetised plasma hurtling out into space and through the Earth’s orbit. If it had happened just nine days earlier, our world would have been hit, potentially wreaking havoc with the electrical grid, knocking out satellites and GPS and costing economies billions of dollars.

While the ability to evaluate threat levels in this area is well beyond the capability of this columnist, credible sources confirm that this is not merely the stuff of junk political thrillers. NASA, hard at work developing a solar weather forecasting system that could enable electrical utilities temporarily to shut down vulnerable transformers, protecting them from a blowout, observes:

With demand for power growing even faster than the grids themselves, modern networks are sprawling, interconnected, and stressed to the limit—a recipe for trouble, according to the National Academy of Sciences: “The scale and speed of problems that could occur on [these modern grids] have the potential to impact the power system in ways not previously experienced.”

A large-scale blackout could last a long time, mainly due to transformer damage. As the National Academy report notes, “these multi-ton apparatus cannot be repaired in the field, and if damaged in this manner they need to be replaced with new units which have lead times of 12 months or more.”

Interestingly, the new Marine Ones reportedly are to be “specially hardened against electromagnetic pulses.” Maybe we mere citizens deserve comparable protection too? Maybe substantially (if imperfectly) inoculating 300 million Americans would cost about the same as … these new presidential helicopters?

Peter Vincent Pry, executive director of the Task Force on National and Homeland Security and director of the U.S. Nuclear Strategy Forum, both congressional advisory boards, said the technology to avoid disaster from electromagnetic pulses exists, and upgrading the nation’s electrical grid is financially viable.

“If you do a smart plan — the Congressional EMP Commission estimated that you could protect the whole country for about $2 billion,” Pry told Watchdog.org.

In other words, for less money than that implied in the full plan to “upgrade the president’s coolest ride” we substantially could mitigate a credible threat to the people’s well being. Are our officials, elected and appointed, being criminally negligent about our safety while squandering money on shiny objects? (Unthinkable? Remember the neglect of the levees preceding Hurricane Katrina?)

The choice to invest so many federal dollars in a preposterously superfluous number of helicopters for America’s Celebrity in Chief instead of protecting major electrical substations has the potential to take “Nero fiddled while Rome burned” up by orders of magnitude.

Not everyone is fiddling. That National Journal reported, last year, Electromagnetic Pulse Caucus Battles Skeptics in Push to Protect the Planet that under the persistent leadership of Rep. Trent Franks (R-AZ), who could prove a modern “Anti-Nero:”

A small but growing cadre of House members is set to relaunch efforts to protect the nation against what they say is a very real threat: the unleashing of an electromagnetic pulse either by a solar storm or a nuclear-armed foe that could cripple much of the nation’s electrical infrastructure.

“I realize there is skepticism, and I understand it’s easy to dismiss this as something coming from people who might go around wearing tinfoil hats,” said Rep. Trent Franks, R-Ariz., one of the leaders of the little-known bipartisan congressional Electromagnetic Pulse Caucus.

But Franks said that he and other members of the caucus—which has seen its roster grow to at least 18 members from 11 last session—will keep pressing “in a low-key way so as not to try to scare people” to show that the dangers are legitimate.

Specifically, his bill authorizes the Federal Energy Regulatory Commission to call on regional entities charged with enforcing mandatory reliability standards for bulk power producers and operators to order that they take measures to protect their systems, including those critical to the nation’s defenses.

In short, his bill requires entities that own or operate large transformers to ensure their power systems can be restored promptly in the event of destruction or disability as a result of attack or geomagnetic storm. The bill would allow the costs to be recovered by raising regulated rates or market prices for the electric energy or services sold.

Progressives — some, anyway — really wish to convert America to a social democracy to benefit rank and file citizens like me. I get that. Thank you.

Hayek, in The Road to Serfdom (Definitive Edition, University of Chicago Press, 2009, p. 148), and I conscientiously can support well-constructed social insurance programs as not inimical to liberty.

That said, on the whole Progressives, currently re-branding themselves as “Populists,” have developed a very serious credibility problem. They need to rein in, rather than wallow in lust to reign in, opulent government programs. As of now, Progressives appear to many of us as slightly power-mad acolytes in a Cult of the Tooth Fairy.

They have squandered a great deal of credibility on “Climate Change” hysteria, in the wake of “Global Warming” hysteria, succeeding theGlobal Cooling hysteria, ”Population Bomb” hysteria (and innumerable other false alarms). Progressive movement groups focusing on addressing the question of risk from solar flares, how much it would cost to ameliorate that risk, and how to pay for that, might let them begin to earn them back some cred with us mere voters.

Maybe start by scaling back the purchase of excessive presidential helicopters? Washington’s failure to see this as “running amok” is symptomatic of the depth of one of our elite political class’s real disorder: profligacy in the service of grandiosity.