In The "War On Youth" The Youth Strike Back For Liberty 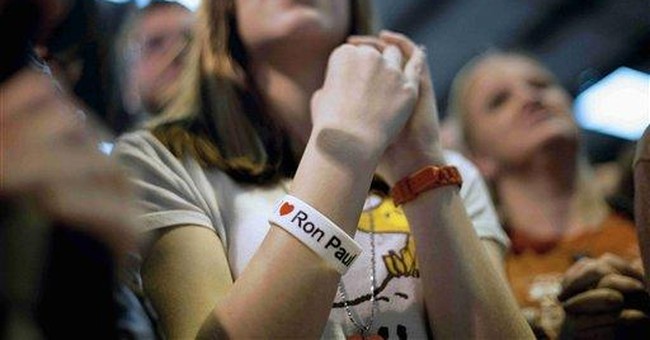 Politics is no country for old men.

The left likes to lampoon the GOP as a party of grumpy old men. Wrong.

A new generation is rising. The most striking display at the recent CPAC was a barrage balloon emblazoned with the words War On Youth. It was lofted over one of the most popular booths there, Young Americans for Liberty.

A new generation is rising fast. It is not grumpy. It is, however, militant for liberty and justice for all.

The left is caught unawares. As usual the left … mesmerized by MSNBC (by far the smallest cable “news” network) … follows only its own propaganda. It is caught in its own house of mirrors. The world is better off letting the left reside in its solipsistic Selfieland. Annoying as they can be, leaving them marooned there we better can contain the damage they would visit upon the naïve and the innocent.

Back here in America the kids are fast rising on the right. High time. One of the best of theenfantes terribleis rising multimedia star Steve Deace. Deace now has set forth a new dispensation to guide the new generation: Rules for Patriots: How Conservatives Can Win Again.

Therein Deace recurrently presents the theme of “Never Trust Republicrats.” HelloUrban Dictionary? Deace defines Republicrat, a word he may have coined, as that…

segment of the American ruling class pretending to be conservatives by paying lip service to conservative principles, and camouflaging themselves in patriotic imagery. Often confused with RINOs (Republicans in Name Only), but Republicrats are far more dangerous because they’ve learned to campaign on conservative talking points. … Once in office the record of the Republicrat is virtually indistinguishable from the Democrats, regardless of the rhetoric, either because of cowardice, deception, or a combination of both.

Deace’s young militant spunk exemplifies the new generation of conservative (and Republican) leaders. That spunk is revitalizing both the conservative movement and the GOP.

The Constitution declares one of its leading purposes to be to “secure the Blessings of Liberty for ourselves and our Posterity.” Finally, after extracting themselves fromCall of DutyandGrand Theft Auto, our Posterity is showing up. High time, kids. Glad to have you responding to a real call of duty. You’ll find ample Bouncing Betties in politics. Trust me.

Will we soon be seeing the kids wearing sweatshirts of Deace in a beret? Guerrillero Heroico, anyone?

The kids are a little too respectful of their elderly elders to go handing gold watches to us or checking us into assisted living facilities. Still, we Reaganites (and the few surviving antediluvian Goldwaterians) are receding into History, our job mostly done. A new generation is rising and taking charge on various fronts from political to tactical to policy.

Deace is playing To Arms for the new generation not Taps for us geezers. (If the rising generation is paying attention, though, Deace sure enough will be playingTapsfor the already decaying MoveOn.org.)

Deace, based in the Hawkeye State, is something of a legend in presidential politics. He has been called a kingmaker. It would be more accurate to call him a “Pretender-breaker.” He has proven to be a kind of electoral Chuck Norris, lying, dressed in camo and heavily armed, in the corn fields to teach Republicrat presidential aspirants a harsh lesson.

It is unclear whether Deace has counted to infinity (twice), as, science tells us, has Chuck Norris. Yet Deace’s demonstrated power to incite Iowa caucus-goers to expel from the field the odd Republicrat presidential aspirant earns him high regard.

Now Deace goes national. We are hearing more from him. He quickly has expanded his AM radio empire to tens of millions of potential listeners. (This columnist has appeared as his guest once or twice.) He recently began writing a weekly op-ed for the Washington Times. And now he has written an important book.

Deace presents his call to arms in a powerful playbook, Rules for Patriots. It is not for the faint of heart. Clearly (and ambitiously),Rules for Patriotsis styled after the great anti-Big-Government radical Saul Alinsky’s iconic Rules for Radicals.

Never Attack What You’re Not Willing To Kill;

Never Accept the Premise Of Your Opponent’s Argument;

Reverse the Premise Of Your Opponent’s Argument And Use It Against Him;

Never Abandon Your Base (Unless They Are Morally Wrong);

Whether or not these rules will prove as influential as Alinsky’s 13 tactics, and ethic, remains to be seen. No question, though, Deace’sRulesare potent. The new generation of leaders inspired by the power of the idea of liberty and justice will be immensely more powerful if they learn these precepts.

How fast is the new generation rising?

Young Americans for Liberty claims over 160,000 young members. And as Jeff Frazee, the head of YAL, recently wrote to his faithful (including this columnist, too old to belong but keeping a finger on the pulse), YAL has “hosted 10 State Conventions and trained more than 1,300 activists in the last two months!We’re building stronger statewide networks and teaching more young people than ever before. Check out the size of the crowds we’re witnessing in each state!”

So much for the leftish caricature of conservatives as grumpy old men. Frazee would do his recruits a great service by gettingRules for Patriotsinto their hands. The Leadership Institute, which touches millions of young people, has a ready-made field manual here. Maybe FreedomWorks should pairRules for Patriotswith the thousands of copies ofRules for Radicalsit is said to distribute. And hello free-thinking, liberty-loving, GenerationOpportunity.org!

Deace, at his radical best, concludes hisRuleswith the most existentially important insight behind political transformation. It is this: we, the people, have the power. It is up to us to exercise it. As Alinsky — before Deace — once captured it, inRules for Radicals: “Even freedom, as a gift, is deficient in dignity….”

Dignity means “the quality of being worthy of respect.” Deace, in Rules for Patriots, nails it:

The system is counting on our complacency. And if we’re being honest we have to admit to ourselves it has every reason to. But we’ve always been the ones in charge. We’ve always out-numbered them. We’ve just been unwilling to act like it.

Now is the time for that action.

Liberty does not grow on trellises.

Liberty proceeds from dignity. Since we value liberty we must take a stand to create liberty.

In the “War on Youth” the youth are striking back.

Welcome, our Posterity, to the unending crusade to secure the Blessings of Liberty.