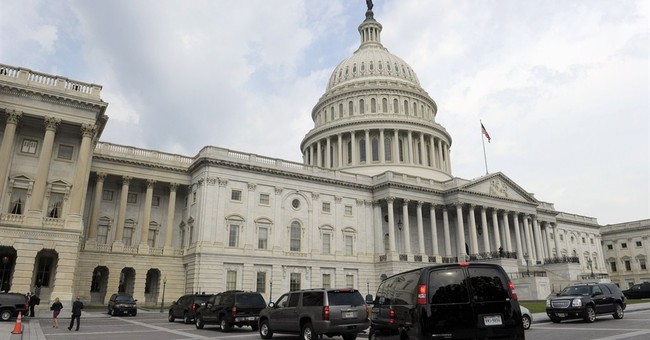 Two Marks, Levin and Meckler, notably and nobly are proposing to change the rules of modern politics and governance.

Debuting at Amazon Number One (for all, not merely political, books) is syndicated radio talk show host Mark Levin’s The Liberty Amendments: Restoring the American Republic. Sporting an average of 4.7 stars from, at the time of this writing, 153 reviews on Amazon, Levin calls for a populist suite of Constitutional amendments to be initiated by the States.

Levin proposes to reform the federal government from its degenerate, bloated, imperial structure back to its (smaller) republican roots. Even more interesting than his specific proposals is the mechanism.

There is a little-known “emergency cord” built into the Constitution by the Founders. Find it in Article V. It allows for the States, rather than just the Congress, to propose Constitutional amendments. It is obscure yet entirely legitimate — and invaluable. It was extolled by James Madison in The Federalist No. 43.

Meanwhile, on August 15th, on the ground and the Web, a civic “Seal Team Six” — of operatives and activists — has constituted itself as ConventionOfStates.com. (This columnist has there enlisted as a foot soldier.) Its purpose? “COS seeks to call a Convention of States for a particular subject—limiting the jurisdiction and power of the federal government. This strategy would allow the states to formally consider almost all of Mark Levin’s ‘Liberty Amendments,’ giving delegates the freedom to propose the necessary amendments to stop the runaway power of Washington, D.C.”

COS’s president is Mark Meckler, head of Citizens for Self-Governance. Meckler co-founded and co-coordinated the Tea Party Patriots, the largest and most authentic Tea Party mega-group. He departed thence “to work more broadly on expanding the self-governance movement beyond the partisan divide.” Head of Citizens for Self-Governance’s Convention of the States Project is the powerful and principled Michael Farris, Chancellor of Patrick Henry College and Chairman of the Home School Legal Defense Association. They are joined by Mark Wohlschlegel II, Executive Director, Laura Fennig, Coalitions Director and Jordan Sillars, Communications Director.

While ConventionOfStates.com recruits and mobilizes political commandos Levin takes to the printing press and to the airwaves — with important support from such megaphonic forces as Rush Limbaugh. Limbaugh, generously lauding Levin’s efforts, recently had this to say on his show:

“Have you heard of Mark Levin’s new book, The Liberty Amendments? … It’s fascinating.  Everybody still asks me, “Rush what can I do, besides vote?”  Everybody wants to do something.  Well, look, the standard, ordinary give-and-take and back-and-forth of politics isn’t gonna work anymore. There are remedies for this.  …  The American people are going to have to fix this, and that’s what Levin’s book is about.  It’s a wonderful book.

“I don’t want to say it’s simple, but it makes so much sense.  … And it is something that, the more people read it, the more people become familiar with it and demand that something be done to reaffirm and strengthen the Constitution, it’s something like this that is going to be necessary … The American people have the power to change this …”

As this columnist wrote here in 2011 Meckler was one of the two lead figures in a seminal gathering held at Harvard University at the initiative of the great (albeit decidedly social democratic) humanitarian populist legal sage Prof. Lawrence Lessig.

“Last week the unthinkable happened.  While you were distracted by the banal and only marginally important presidential primaries, the lion, Harvard Law School, publicly lay down with the lamb, the Tea Party Patriots.  The long-term political implications are, potentially, far more potent than a mere presidency.”

The essence of this epochal event was just (but no less than) this:

“Lessig and the Tea Party, and its guiding spirits, are populists.  Populism was forever redefined by Jeffrey Bell ([then] a business partner of this columnist) as optimism about people’s ability to manage their own affairs better than an elite can manage them for them.  Populism is neither left nor right wing.  Populists of all stripes share in common a conviction in ‘power to the people,’ a belief that in a republic ‘citizen’ is the noblest office.  And while Lessig and Meckler may disagree about just about every ideological issue, their respect for the wisdom and dignity of the citizens unites them in a realm far more important than the ideological.

They came together to explore a mechanism by which America’s government can be changed by, of, and for the people.  Jefferson was unequivocally right when he wrote:

‘Prudence, indeed, will dictate that governments long established should not be changed for light and transient causes; and accordingly all experience hath shown that mankind are more disposed to suffer, while evils are sufferable, than to right themselves by abolishing the forms to which they are accustomed.’

So. Are there insufferable evils?

For the first time in modern history the populist left and populist right came together to endorse, and seek a way to operationalize, a transcendent belief in citizens over government.”

Are there insufferable evils today? You bet there are. Is Article V a valid means of redress?  Yes.

Yet there are figures on the right who oppose a states-driven constitutional amendment process. Foremost among these has been the great Phyllis Schlafly. The conservative proponents of Article V now, indeed partly out of deep respect for her, offer iron-clad safeguards against her concern about the possibility of a “runaway convention.”

The support by such deservedly respected bodies as the Goldwater Institute and the American Legislative Exchange Council have allayed the fears of all but the “’til the last dog dies” skeptics. Among these skeptics include some lions of the left as well. Consider Harvard’s Prof. Laurence Tribe under the quilts with the John Birch Society in opposition. Together they make perhaps the strangest-bedfellow tableau in constitutional history since Hamilton and Jefferson served together in Washington’s cabinet.

We, the people, have, of late, sent waves of reformers to Washington to restore to us our power, money and dignity. We see our champions (mostly) stymied by the System. Therefore… it is time to change the System. Amending the Constitution represents a classical liberal, conservative, not radical, solution.

As James Madison wrote  in The Federalist No. 43,

“That useful alterations will be suggested by experience, could not but be foreseen. It was requisite, therefore, that a mode for introducing them should be provided. The mode preferred by the convention seems to be stamped with every mark of propriety. It guards equally against that extreme facility, which would render the Constitution too mutable; and that extreme difficulty, which might perpetuate its discovered faults. It, moreover, equally enables the general and the State governments to originate the amendment of errors, as they may be pointed out by the experience on one side, or on the other.” (Emphasis added.)

It’s been an unequal fight. Our government has much too much power and money. We, the people, demand our money, our power, and our dignity back.

We mere citizens cannot, it seems, win the game as now constituted. Article V, the game changer, is a path back to liberty. Bravo, now, to the two Marks, Levin and Meckler. Time to pull the Constitution’s emergency cord to stop the runaway federal freight train.