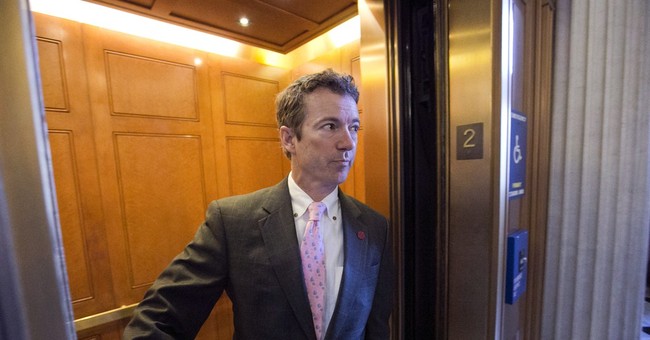 Libertarianism, thanks, among other factors, to the emergence of leading presidential candidate Sen. Rand Paul, is coming to the fore. It is presenting itself in fresh, less eccentric, and increasingly attractive ways. Moderate libertarianism may be capturing the fancy of an overtaxed, fed-up-with-debt-fueled grandiose government, war-weary, live-and-let-live, Republican base and American people.

Time Magazine recently featured Sen. Rand Paul as one of the 100 most influential people in the world. He was not just on the list. Time placed Paul on its cover for the first, (though likely not for the last time). This may signal the emergence of the Libertarian Moment.

We didn’t arrive into this “Grandiose Government” pickle absolutely positively overnight. Sen. Paul and others seek to lead us on the path out and to safety. It will make their job easier if we better understood how we ended up in this gutter in the first place.

The road toward serfdom was a long and winding one. How did the American government transform from our servant to master? Where did it get the resources to move from a small, frugal, lighthouse-keeping cluster of agencies to its status of world-record “Hey Big Spender” which, with federal 2013 projected outlays of $3.8T, spends more than the entire GDPs of every nation other than the U.S. itself, China, and Japan?

To put federal government spending into its spectacularly vertiginous perspective, this columnist elsewhere, about two years ago, noted:

The federal government spent $15 billion from 1789 – 1900. Not $15 billion a year. $15 billion cumulatively. [Ed. Note: by another source, it was $16.5B, an immaterial difference.] Uncle Sam will spend $10 billion a day in 2011. The federal government spends more every two days than it did altogether for more than America’s first century. Although these sums are not adjusted for inflation [or population growth] they give a correct impression of the magnitude of the change from what our Founders set forth and our early statesmen delivered.

How does Washington get its hands on so much money? Three ways. Taxing us, on which it is maxed out. Borrowing — deficits — to which there is a growing massive resistance. And there is a third and even more pernicious way: printing dollars.

The power to print money at whim is wrong. It is toxic to our personal and national wellbeing. And it is unconstitutional.

From $16 billion cumulatively over a century to $10 billion a day? Unconstitutional? Therein hangs a tale.

Spoiler alert: it was a logically indefensible 1884 U.S. Supreme Court decision about federal monetary powers that imbued the federal government with sovereign attributes. This laid the doctrinal predicate for the metastasis of meta-statism. It will be easier to extricate America from its dispiriting predicament by knowing how we got here in the first place. Enter Cato Institute.

Cato promotes “a vision of society free from excessive government power.” Cato patiently has been taking the lead in disputing against the manifold rationalizations propounded by those lusting to become “corrupted absolutely” through the achievement of absolute power. Under new President John Allison, Cato, while maintaining its scholarly rigor, is beginning to pack an increasingly serious wallop inside the corridors of power.

Case in point. Cato has carved out a niche as thought leader on monetary policy in Washington. This is in large measure attributable to the work of its Vice President for Academic Affairs (and editor of the Cato Journal) Prof. James Dorn. For over thirty years, Cato has staged an extensive annual conference on what had been a mostly orphaned issue: monetary policy. This annual conference now approaches iconic status.

Cato now is upping the ante on monetary reform, dramatically. The Spring/Summer 2012 issue of The Cato Journal, drawing on the proceedings of its 29th annual monetary conference, was devoted to “Monetary Reform In the Wake of the Crisis.” So many prominent scholars, and many highly respected public intellectuals, were featured therein that it is impractical to list them all. Cato makes this publicly available.

More recently, moreover, Cato staged a panel, to an overflowing crowd, to celebrate the publication of Prof. Richard Timberlake’s latest “tour de force” (as it is described by the influential Prof. Kevin Dowd of the University of Durham): Constitutional Money, A Review of the Supreme Court’s Monetary Decisions. The fact that premier academic publisher Cambridge University Press brought out this Cato Institute Book itself is noteworthy.

Timberlake is the dean of classical monetary policy economists and adjunct scholar at the Cato Institute. He likely is the only economist still productive who was born under a regime where one could present a $20 bill at any bank and receive a $20 one-ounce gold coin). Cato’s own description of this work concludes: “The final chapter describes the adjustments necessary to return to a gold standard and briefly examines other monetary arrangements that would be consistent with the Framers’ Constitution.”

Contained in Constitutional Money is a gripping exposé of the judicial coup d’etat inverting the constitutional structure of the United States from one of limited government to one of almost limitless government. Timberlake nails the infamous case of Julliard v. Greenman (1884) which, for the first time, imbued Congress with the attribute of “sovereignty.”

Timberlake: “(Mr. Justice) Gray then observed: ‘The people of the United States by the Constitution established a national government, with sovereign powers, legislative, executive, and judicial.’ He cited Marshall’s opinion on the scope of Congress’s enumerated powers, noting that the government, ‘…though limited in its powers is supreme within its sphere of action….’ Nowhere in Marshall’s decision, or in the Constitution, can one find the words ‘sovereign’ or ‘sovereignty.’ (p. 120) … Nothing in the written Constitution supports such a construction. No man who attended the Constitutional Convention in 1787 would have imagined it, or endorsed it for an instant, or even tolerated it as arguable. (p. 123)”

This columnist takes great personal pleasure at Prof. Timberlake’s decisive evisceration of Julliard. In 1981, this columnist was one of the 23 formal witnesses called (at the behest of Gold Commissioner Lewis E. Lehrman, with whose Institute he now has a professional relationship) to testify before the Reagan Gold Commission. That testimony was reflected in Commission executive director Anna Schwartz’s excellent Reflections on the Gold Commission Report (p. 326): “Two attorneys attacked the present monetary system as unconstitutional.”

Prof. Schwartz’s passing comment does not quite capture the argument contained in my testimony, “The Constitutional Requirements that U.S. Currency Be Backed By Precious Metals,” which was a critique, not an attack. That testimony concluded not that fiduciary currency is “unconstitutional,” rather that “The Founding Fathers, who had lived through periods of inflation and hyperinflation, intended to — and effectively did — remove the temptation of paper money from the hands of the state governments, and withheld it from the federal government. These men were intellectual giants. As the heirs to their good works, it is up to us to preserve their legacy, rather than subvert it.”

Prof. Timberlake has struck a real blow for liberty by exposing — and providing a devastating intellectual critique of — the “smoking gun” behind ultra-government, Julliard. By authoritatively prying it from its hiding place in the vaults of American jurisprudence Timberlake furnishes a potent tool with which authentic “small r” republican leaders better may begin to right the ship of state.

Timberlake’s Constitutional Money provides excellent scholarship. It also presents as an intellectual thriller, a page-turner, which those who care about classical liberalism will find impossible to put down. It is a great contribution to monetary, as well as classical liberal, discourse. Most of all in publishing this work Cato Institute provides a powerful intellectual tool to reformers such as Rand Paul. As principled officials like Sen. Paul expand the defense of our civil liberties into advancing an economic agenda built on those principles they could do no better than to begin with Timberlake’s Constitutional Money. Restoring money with constitutional integrity, and only by restoring money of constitutional integrity, will foster a climate of equitable prosperity, personal dignity, and true liberty.