Memo to Team Romney: Flipping the Obama Campaign on its Back 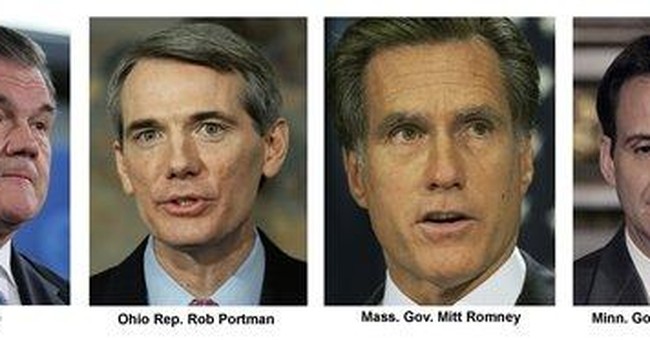 President Obama’s re-election strategy will be predicated on blaming the economic stagnation on George W. Bush, and, thus, the GOP, my colleagues Frank Cannon and Jeff Bell persuasively argued recently in The Weekly Standard. Cannon and Bell are right. And, that said, Bush’s fiscal policies were not the culprit.

Bush was mugged by the Fed. The Fed produced a Hurricane Katrina of louche money. The Fed produced the housing bubble, which, popping, caused the panic of ‘08. The Meltdown developed on Bush’s watch. More voters therefore still blame Bush than Obama for the lousy economy. Obama is exploiting that at the heart of his campaign strategy. But Obama’s strategy of blaming Bush can be forced to backfire.

Flipping the Obama campaign on its back requires that the Romney campaign exploit this vulnerability: Obama has embraced the same Fed whose policies caused the catastrophe. Romney can use this to turn Obama’s line of “Blame Bush” attack back on Obama. But he can do so only if his political team shows the same degree of savvy as does his economic team.

Romney’s economic team is led by R. Glenn Hubbard. Hubbard, although having done a stint as chairman of the council of economic advisers under Bush, gets it. He unflinchingly attacks the Fed policies that torpedoed the economy. If Romney’s political strategists will pivot and open fire on the real culprit, defective central planning by the central bank, Obama’s main campaign thrust is parried and can become fatal to the president’s reelection hopes.

Cannon and Bell observe that “Obama strategists would treat Romney’s selection as a vice presidential running mate of anyone who could be portrayed as a Bush-era economic policymaker (such as Ohio senator Rob Portman) as a gift from the political gods.” This is emphatically true applied to “a Bush-era economic policymaker” who misunderestimates how critical monetary policy is in creating an economic climate of job growth and prosperity — or, as now, despair.

The GOP seems to have gotten it through its thick head that tax increases — like the preprogrammed “Taxmaggedon” threatening America — are terrible for the economy and job creation. Most voters clearly understand this. But good tax policy alone is not enough. Good money — keeping the dollar healthy — was as much part of the foundation of the Reaganomics magic as was cutting marginal tax rates. Most voters understand this too.

Reagan worked his voodoo to achieve prosperity through two key variables: tax rate reduction and an end to the flood of cheap Carter regime dollars. (Clinton held on to the essence of these and upped the ante with trade liberalization and, under pressure from Gingrich, welfare reform.) Lower tax rates and good money unleashed a tsunami of worldwide economic growth. The crucial “good money” piece of Reagan’s formula often seems to have been lost on much of Washington, even on the establishment GOP who should have internalized the core of Reaganomics by now.

There’s been a recent sighting of the Republican Memory Hole, emanating, alas, from that very Rob Portman against whom Cannon and Bell characterize as “a gift from the political gods” for Obama. The Supply Side, the Tea Party, the Conservative, and the Libertarian bases of the GOP were stunned earlier this month by Portman’s public attaboy for President Obama’s job-killing monetary policy.

Portman is widely considered the frontrunner pick for Vice President so this was not the usually inconsequential Senatorial blather. If he is selected without having retracted this it will be much harder for Romney to credibly undercut the Obama strategy. In a June 13 op-ed in Politico Portman wrote to contrast the feeble Obama recovery with the strong Reagan recovery in We Can Do Better on Economy. Buried 12 paragraphs in Sen. Portman observes:

Even as? Despite? This seems to mean that Mr. Portman considers the Reagan-era stabilization of the dollar by the Volcker Fed contractionary and the Obama-era flood of dollars by the Bernanke Fed … stimulative. Let us hope this was merely an infelicitous choice of words. But… Portman served as Bush’s Director of the Office of Management and Budget. By training and disposition his proficiencies are … management — meaning regulations— and budget. Not money when money is crucial.

Portman shows he has assimilated half of the Reagan lesson by calling for “pro-growth tax reform by lowering marginal tax rates and pay for it by closing loopholes that only complicate the Tax Code and slow growth.” And Portman calls, uncontroversially, for “regulatory relief to small businesses, open up more export markets … and encourage domestic energy production to create jobs and lower prices. … (and to) rein in runaway spending ….”

Good fiscal and regulatory policy are necessary for growth. But by themselves they are insufficient. Portman concludes his claim that the GOP can do better by saying “These pro-growth policies would unshackle the economy and encourage hiring. They would bring long-term sustainability to the budget and new revenues through growth. There is no reason the economy cannot return to the higher growth that occurred in past recoveries. We have the blueprint; we just need the will.”

Yes, Senator, we have Reagan’s blueprint for economic growth: good monetary, as well as good fiscal, policy. In the party’s Congressional wing, Joint Economic Committee Vice Chairman Kevin Brady, joined by, now, 45 House co-sponsors and your colleague Sen. Mike Lee call for passage of the “Sound Dollar Act” as the first important step towards better monetary policy. Perhaps Sen. Portman’s implication that current Fed policy is stimulative was merely a rhetorical lapse. If so it is one from which he can quickly recoup by consulting with good money GOP champions.

There’s a discussion under way within the GOP as to whether the “Taylor Rule” or the “Golden Rule” is the better choice. But there is a firm consensus within the party — one shared, according to Rasmussen , by the voters — that good money is essential to job growth and prosperity.

Romney’s economic team understands the need for monetary reform. Led by Hubbard, Team Romney is on record demanding just that. Romney’s prospects may well depend, now, upon whether Romney’s political team will grasp how Obama’s effort to attach blame to the GOP for the lousy economy can be turned back on Obama himself by an attack on Obama’s support for louche Fed policy.