New Hitler Biography: What Role Did the U.S. and Capitalism Play in Hitler’s Worldview?

Rainer Zitelmann
|
Posted: Dec 03, 2020 12:01 AM
Share   Tweet
The opinions expressed by columnists are their own and do not necessarily represent the views of Townhall.com. 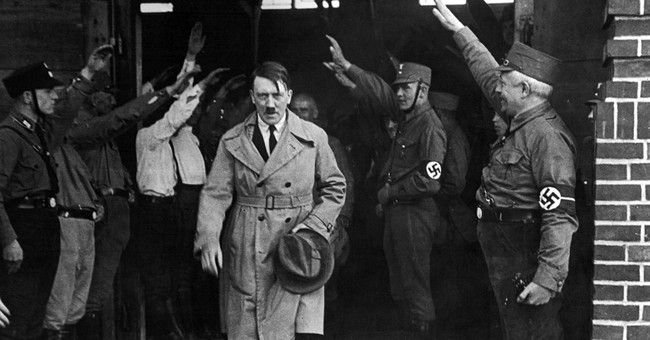 After seizing power, Hitler’s first target was the communist party. He promised to “liberate Germany from Marxism,” and he attacked the communist Soviet Union. For historians like Ernst Nolte, Hitler was above all an anti-communist – while leftist anti-fascist scholars have even described him as an “agent of capitalism.”

Now Brendan Simms, professor at the Centre of International Studies at Cambridge University, has written a provocative biography that turns traditional interpretations of Hitler’s worldview on their head: It wasn’t communism that Hitler hated above all else, but capitalism in general and the United States in particular: “The Anglo-American capitalist world order against which Hitler revolted structured his entire political career.” And the root of Hitler’s Jew-hatred, Simms adds, was “primarily to be found in his hostility to global high finance rather than his hatred of the radical left.”

On the one hand, he admired the United States as an adversary because of its modernity and vast economic potential, but also because of its greater social mobility and better opportunities for workers to make a life for themselves, while on the other hand he feared that the future belonged to the “giant states” and the United States was foremost among them. Hitler hated the U.S. as a representative of capitalism and, above all, he feared and admired the U.S. because of its demographic strength. In Hitler’s mind, the emigrants who had left Germany and the rest of Europe to seek a new life across the ocean were the most courageous, daring and determined people the continent had to offer. As Hitler saw it, the United States was peopled by the racially sound descendants of British emigrants, combined with the best elements of continental Europe. He did not see Bolshevism so much as a threat in its own right, but as an instrument of “international Jewish capitalism to undermine the working of national economies and render them ripe for takeover by international finance capital (both Jewish and non-Jewish).”

That Hitler attacked the Soviet Union was, in the author’s view, primarily an economic solution to Germany’s problems. Hitler wanted to conquer “new living space” to secure the raw materials and markets that Germany would need to become a world power. According to Simms, Hitler’s policy of eastward expansion was not primarily motivated by ideological concerns. The driving force behind Hitler’s strategy was neither hatred of the Jews nor animosity toward communism. Nor was Hitler planning to establish a reactionary agrarian utopia, as has often been claimed in the previous research. “He looked forward to a modern American-style German east, not back to a traditional rural idyll.”

Simms also sees a close connection between Hitler’s racism and his opposition to capitalism. “Capitalism and racism, in Hitler’s book, were not compatible.” And: “Most importantly of all, Hitler wanted to establish what he considered racial unity in Germany by overcoming the capitalist order and working for the ‘construction of a new classless society.’”

Is Simms right with his provocative theses? In many respects yes, but in some respects no. That Hitler was an anti-capitalist is true. The author could have better demonstrated the central role of anti-capitalism in Hitler’s worldview by devoting more detailed attention to Hitler’s economic thought, which unfortunately Simms chooses not to do. In fact, Hitler had developed an inherently consistent system of economic and socio-political thought, as I explain in my book Hitler. Policies of Seduction.

After launching his offensive against the Soviet Union, Hitler became an increasing admirer of the planned economy – indeed he strove for a fundamental post-war revolution of the German economy. Socialist and anti-capitalist elements played a much greater role in his thinking than is widely believed.

When he claims that Hitler was not only an ardent admirer of the United States as a modern industrial country but that he was also by no means an advocate of an anti-modern, agrarian utopia, as has so often been claimed in the past, Simms is right on both counts – and I offer extensive proof of this in my own study. It is also true that Hitler’s strategy of conquering new living space in the east was not driven by ideological preoccupations, but economics. Simms could have provided even stronger evidence for this thesis had he expounded upon Hitler’s “shrinking markets” theory and his criticism of the German economy’s strong dependence on exports in more detail.

Simms is not correct, however, when he claims that anti-communist preoccupations did not play a key role in Hitler’s thinking and that he only attacked the Soviet Union because he saw it as “weak.” On the contrary: Hitler viewed National Socialism as an alternative revolutionary movement to the communist movement. In Hitler’s eyes, the communists were his only serious opponents. From Hitler’s point of view, they were ‘fanatics’ – and he used this word as the highest form of praise – who would stop at nothing to achieve their aims. In sharp contrast, he regarded the bourgeoisie as cowardly and weak, and liberal capitalism as a rotten, decadent system that was doomed to fail. Hitler increasingly admired Stalin and no longer believed in his own propagandistic slogans concerning “Jewish Bolshevism.”

The same characteristics of the communist movement which are particularly worthy of criticism from a democratic-liberal point of view earned Hitler’s highest admiration: the totalitarian nature of its ideology, the unrestricted will to seize and hold power and the clearly formulated goal of “fanatically” fighting and “annihilating” any and all political opponents. From Hitler’s point of view, the communists and the Soviet Union posed a far greater threat than this book would have one believe.

The merit of his book, however, is primarily that it reveals Hitler’s anxieties about demographics and the great importance he attached to emigration as an element of America’s strength. No other researcher before Simms has been able to offer such a clear analysis of what was one of Hitler’s major preoccupations. Simms is also right when he emphasizes Hitler’s strident anti-capitalism and points out that his plan for the “seizure of living space in the east” was not motivated by racial ideology, but by economic considerations.