France Forced to Face Link Between Terrorism and Immigration

Rachel Marsden
|
Posted: Nov 04, 2020 12:01 AM
Share   Tweet
The opinions expressed by columnists are their own and do not necessarily represent the views of Townhall.com. 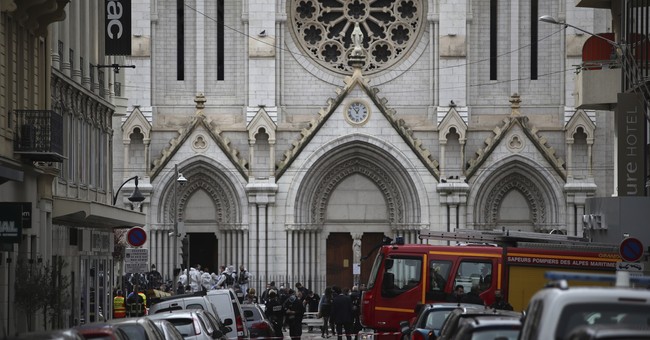 PARIS -- France went back into lockdown last week. The contours of the new lockdown are different from the more strict two-month confinement in March to avoid obliterating what's left of the French economy. Schools are remaining open, and those unable to work remotely can obtain permission to continue their daily commute. But there's another glaring difference this time.

As with the earlier lockdown, French citizens have to download, print and fill out authorizations from a government website in order to leave home for any of the governmentally permissible reasons. But police resources to manage the use of these lockdown authorizations are now being stretched impossibly thin, because two crises have simultaneously hit France.

Just as the new lockdown was announced, French Prime Minister Jean Castex also announced that the nation's terror alert level was being raised to "attack emergency," the highest level, after a series of terrorist attacks on French soil. The state now has to choose between allocating resources to prevent joggers from venturing farther than one kilometer away from home, once per day, for a maximum of one hour, and stopping young, naturalized French jihadists from slaughtering people.

Abdoullakh Anzorov allegedly beheaded French schoolteacher Samuel Paty outside a school in the Parisian suburbs on Oct. 16 after Paty had shown published caricatures of the Prophet Muhammad to his class. Anzorov, who was shot and killed by police after the attack, was an 18-year-old naturalized Chechen whose family was welcomed into France as refugees from Russia. The West has long accused Russian President Vladimir Putin of victimizing Chechens in anti-terrorist crackdowns, and Western nations have welcomed Chechen refugees with open arms. (The Boston Marathon bombers, Tamerlan and Dzhokhar Tsarnaev, were also Chechen immigrants.)

Last week, three people were killed in a knife attack at the Notre Dame Basilica in the city of Nice. The attacker, Ibrahim Issaoui, is a 21-year-old Tunisian refugee who recently came to France from Lampedusa, an Italian island and refugee hotspot.

On Sept. 25, two people were wounded in a knife attack outside the former offices of Charlie Hebdo magazine, where 12 people were massacred in a terror attack in January 2015. Charlie Hebdo had published a series of caricatures of the Prophet Muhammad a few years earlier. The perpetrator of the Sept. 25 attack, Zaher Hassan Mahmood, is a young Pakistani man who came to France three years ago as an "isolated minor."

The French government seems to realize that there's a pattern here -- and a problem with the country's immigration system.

The COVID-19 crisis gives the government the perfect excuse to accelerate the implementation of tougher immigration measures. It's because of the coronavirus, we're told, that France is imposing stronger border controls. Unmanaged migration resulting in tent cities and homelessness isn't compatible with lockdown restrictions.

France simply isn't capable of the kind of generosity it once aspired to when it welcomed asylum seekers en masse, not worrying much about how it would find the money to support them. With the French economy taking a massive hit from the first lockdown and now grappling with a second one, the immigration gravy train is on the verge of derailing.

France really didn't need the coronavirus crisis to justify an immigration clampdown. The feeling of insecurity caused by the logistical inability to welcome and integrate newcomers has long been palpable. But French officials have been careful to avoid using language that suggests a need for immigration restrictions for fear of being treated as racists by the political opposition.

It's even more taboo to conflate terrorism with immigration. Those two issues have to be kept separate, we're told.

"The subject of immigration should not be taboo, but I think it is a mistake to approach it with the subject of terrorism, French President Emmanuel Macron said at a town hall meeting in January 2019. "This is not the right path."

The recent acts of terrorism in France have made the link with immigration undeniable for even the staunchest ideologues and open-borders proponents. It's a damning indictment of the French immigration strategy -- or lack thereof -- that the country all too carelessly welcomed in those responsible for taking French lives in cowardly attacks.