Rachel Marsden
|
Posted: Aug 28, 2019 12:01 AM
Share   Tweet
The opinions expressed by columnists are their own and do not necessarily represent the views of Townhall.com. 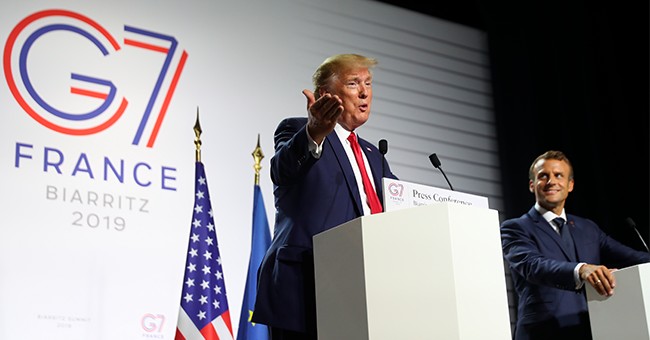 VANCOUVER, British Columbia -- At the conclusion of the annual Group of Seven summit in Biarritz, France, U.S. President Donald Trump emerged on the world stage for a joint press conference with the summit host, French President Emmanuel Macron. It was arguably the best performance of Trump's presidency.

It certainly bore little resemblance to Trump's stream-of-consciousness rants on Twitter in which he criticizes TV shows and the "fake and disgusting news," bad-mouths countries and former staffers, promotes conspiracy theories and complains about his approval ratings. Trump should hold more of these types of press conferences and spend less time on Twitter. On his favorite social media platform, he comes off as erratic and angry. His attempts at tongue-in-cheek humor fall flat. Tone is often poorly conveyed in social media, which is why emoticons were invented.

Trump's press conference in France didn't involve any prepared statements or reading from a teleprompter, which tends to make Trump look like he's recording a hostage video. Nor did it involve standing in front of a group of supporters and tossing them red meat, which makes him look like a carnival barker.

This was a rare sighting of Trump playing it totally straight. There was no sarcasm. There were no insults to detract from the substance of his remarks or to cover for a lack thereof. Absent such distractions, what emerged was evidence that Trump has a firm and reasonable grasp of the issues.

When confronted by a reporter about the roller coaster that he's inducing in the global markets as a result of a tit-for-tat trade war with China, Trump replied: "It's the way I negotiate. It's done very well for me over the years and it's doing even better for the country."

When the Iranian foreign minister arrived in Biarritz during the summit to meet with his French counterpart and with Macron -- a masterful diplomatic coup by the French president, who backs cooperation and dialogue with Iran -- former U.N. Ambassador Nikki Haley promptly lost it on Twitter.

"This is completely disrespectful to (Trump) and the other leaders at the G-7," Haley tweeted. "Iran supports terrorism at every turn and continues to pursue "Death to America." Manipulative of Macron to do this and very insincere. #NotWhatFriendsDo"

Instead of shunning attempts at dialogue with nations historically targeted for regime change by neocon warmongers, Trump spoke of Iran in terms of business opportunities and expressed interest in meeting with Iranian leadership.

Trump delivered those remarks in front of his national security adviser, John Bolton, who has spent years advocating for Iranian regime change -- sometimes even at Iranian opposition rallies.

It's not the only foreign policy matter that Trump grasps better than many of his critics. In response to a journalist's question about Trump daring to consider letting Russia back into the G-7, Trump framed the issue as punishment for Obama having been "outsmarted" by Russian President Vladimir Putin when Russia annexed the Crimean Peninsula in 2014. The attempt to overthrow the Russian-friendly Ukrainian president through a Western-backed coup resulted in Russia's efforts to safeguard Crimea, which was gifted to Ukraine by former Soviet premier Nikita Khrushchev in 1954, and where Russia's Sebastopol Naval Base (home to the Black Sea Fleet) has been located since 1783.

When the press confronted Trump about his skepticism on climate change, Trump cut to the chase.

"I feel that the United States has tremendous wealth," Trump said. "The wealth is under its feet. ... I'm not going to lose it on dreams, on windmills, which frankly aren't working too well."

Trump's performance in France was pitch-perfect in its authenticity, tone and substance, and it reminded people who are fluent in foreign policy why they support him. If only Trump could abandon Twitter in favor of performing like this at White House press conferences to do a better job of selling his actions and his agenda to the American public.