Critics Of Trump-Putin Summit Are Missing The Point

Rachel Marsden
|
Posted: Jul 16, 2018 3:00 PM
Share   Tweet
The opinions expressed by columnists are their own and do not necessarily represent the views of Townhall.com. 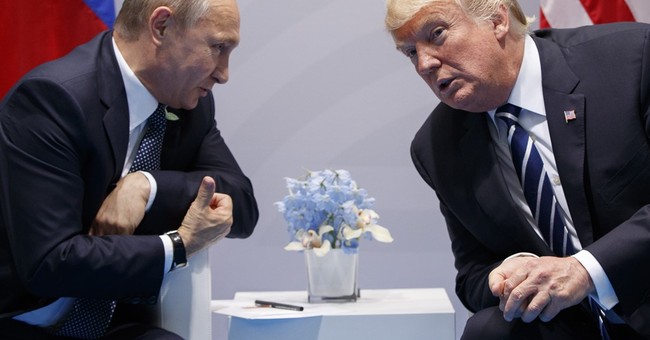 U.S. President Donald Trump met with Russian President Vladimir Putin in Helsinki this week in an effort to nail down some points of cooperation as a foundation for a new relationship between Russia and America -- and some people promptly went into hysterics.

The American left doesn't want cooperation because Russia stands for everything that the left despises: border control, cultural cohesion, traditional gender norms, a low flat tax on income across the board, and an appreciation of President Trump.

Establishment Republicans are also against a rapprochement, either because their defense-contractor campaign donors rely on the Russian bogeyman to scare up business, or because their brains are stuck in the Soviet era and they aren't aware that even Putin is now trying to fight communist ideology within his country.

Critics of the Trump-Putin summit don't seem to understand that spying on each other doesn't rule out the possibility of cooperation. Allies and partners will always gather intelligence on one another, if only to verify that words match actions.

Consider, for example, a 2015 story from the Toronto Star: "Canada turfed out more spies to the U.S. than elsewhere." From 2014 to 2014, Canada expelled 21 individuals suspected of espionage. Five of the 21 evictees were from the United States -- more than from any other country. Only one of the suspected spies expelled from Canada during that period was Russian.

Anyone who seriously thinks that Trump's priority at the summit should have been to lambast Putin and Russia for espionage activities is painfully naive.

In 2013, a U.S. diplomat wearing a ridiculous blond wig and carrying a large sum of money was detained in Moscow by Russian counterintelligence, allegedly for trying recruit a Russian intelligence officer to work for the CIA. Did Putin use the incident to drive a permanent wedge between the two countries? Hardly.

In 2015, when a Turkish fighter jet shot down a Russian aircraft near the Turkey-Syria border, Putin didn't let the incident become anything more than a speed bump en route to stronger ties with Russia's longtime Western ally. It's no wonder Russia has made significant diplomatic gains in recent years.

Last week, U.S. special counsel Robert Mueller indicted 12 Russian military intelligence officers for allegedly meddling in the 2016 U.S. presidential election by hacking into the computer networks of the Democratic National Committee and Hillary Clinton's campaign. The indictments are now being exploited by those interested in derailing any sort of detente with Russia.

So please forgive me for not automatically accepting the allegations in the indictment as proven fact. I'd like to actually see metadata analysis and technical dot-connecting before jumping to any conclusions.

If Russia cooperates in Mueller's investigation, as Putin has offered -- provided that the U.S. question CIA officers and other officials accused of spying by Russia -- then any technical evidence would have to be handed over in the discovery process. That's the only way we'll ever get to see it. Meanwhile, the unproven allegations against the Russian intelligence officers will be repeated enough over time to become fact in the public conscience.

There's too much at stake in U.S.-Russia relations to let the Mueller indictments get in the way of rapprochement. Critics of the Trump-Putin summit echo the critics of the 1986 Ronald Reagan-Mikhail Gorbachev summit in Reykjavik, Iceland -- which was the beginning of the end of the Cold War. So let the naysayers thrash and wail about the demise of their own personal or political agendas as the rest of the world, led by pragmatists such as Trump and Putin, leaves them behind.