Macron Shows Courage by Tacking to the Right

Rachel Marsden
|
Posted: Oct 18, 2017 12:01 AM
Share   Tweet
The opinions expressed by columnists are their own and do not necessarily represent the views of Townhall.com. 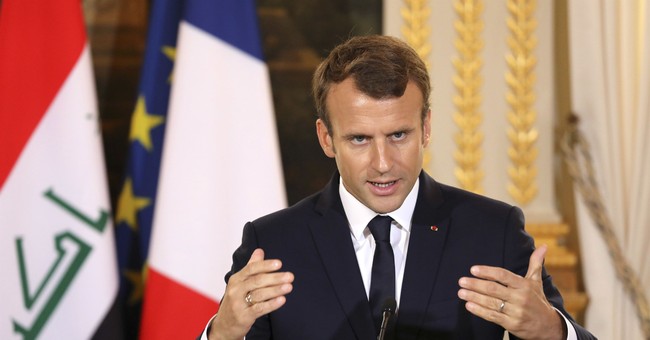 PARIS -- After visiting France as a guest of honor at the Bastille Day parade earlier this year, U.S. President Donald Trump said of French President Emmanuel Macron, "He's a great guy -- smart, strong, loves holding my hand." A couple of months later, at the United Nations General Assembly in New York, Macron repaid the compliment during a press conference with Trump: "I have to say just for the American people, that our people in France were very proud to have you and your wife, Melania, in Paris ... for Bastille Day."

Macron's compliment was bold in light of the constant global media and establishment attacks on Trump, as well as Trump's unpopularity in France. But the two leaders have much more in common than not.

Like Trump, Macron isn't afraid to speak his mind. During his presidential campaign, for example, Macron was caught on camera saying to a striking worker who lamented his inability to afford a suit like Macron's: "If you do not like France being blocked, stop blocking it. You know the best way to afford a suit? You will not make me cry with your T-shirt. The best way to get a jacket is to work."

Macron told a group of fired and striking workers that they should try getting jobs with a company that's recruiting instead of "raising hell."

As someone of the same age and mindset, I understand Macron's frustration. We grew up in the era just before they started handing out participation trophies when achievement still meant something and was valued as much as sportsmanship.

The world took a turn for the worse when leftist idealism and political correctness promoted victimization as a substitute for achievement. As Western society prioritized and fostered dependence, achievement was redefined as privilege rather than the result of hard work and self-sacrifice. To level the playing field, your years of hard work and sacrifice would be wiped away by fiscally punitive government action. In France, the achievers became the bad guys, attacked for "selfish independence" and for the refusal to surrender to the socialist tsunami that has brought French institutions to the breaking point.

Leftist unions announced that they would be in the streets in full force this fall to block the desperately needed labor reforms that Macron has issued by presidential decree. But for once, French labor leaders have been rendered ineffective and inaudible. Macron simply tried something different: not flinching. Instead, he doubled down.

"I will be absolutely determined, and I will not yield anything, neither to the idlers, nor to the cynics, nor to the extremes," Macron said.

Macron has also been explaining that the French need to get over their jealousy of the rich and that taxing the wealthy into oblivion means that they'll simply leave the country for a less punitive environment. Macron has also said that when undocumented migrants end up on the radar by committing a misdemeanor, they need to be ejected from France.

It's not surprising that 38 percent of respondents to a recent Harris Interactive poll categorized Macron as "right wing," while only six percent characterized his politics as leftist. Much of the French media seems shocked by Macron's rightward shift. As former British Prime Minister Margaret Thatcher once said, "The facts of life are conservative." As a pragmatist, Macron was destined to lean right.

Finally, France has a president who believes that the achievers of French society should have maximum freedom and minimal red tape so that they can be positioned to create well-paying jobs, grow the French economy and provide assistance to the less fortunate. The French motto, "liberte, egalite, fraternite," comes from a place of individual strength that facilitates generosity of heart, not from the government putting the screws to its people in the interests of some miserable collectivist delusion.