Rachel Marsden
|
Posted: May 03, 2016 12:12 PM
Share   Tweet
The opinions expressed by columnists are their own and do not necessarily represent the views of Townhall.com. 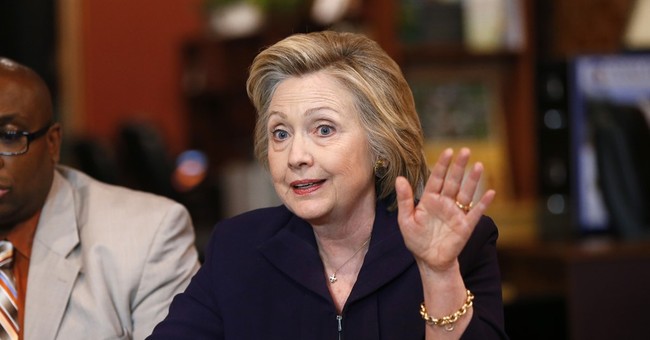 PARIS -- There's a right way and a wrong way to play the "woman card," and Hillary Clinton has recently played it both ways.

"The only card she has to play is the woman's card," Republican front-runner Donald Trump said of Clinton last week. "If she were not a woman, she wouldn't even be in the race."

The Clinton campaign responded by raising $2.4 million in three days selling "woman cards" with "deal me in" printed on them. That's exactly the right way to play it.

Now here's the wrong way. Clinton was asked during an interview with CNN's Jake Tapper whether she'd learned anything about how to handle Trump from watching how Republican candidates had dealt with him in the primaries:

"I have a lot of experience dealing with men who sometimes get off the reservation in the way they behave and how they speak," Clinton said.

Tapper had simply asked Clinton how she might deal with Trump as a competitor. The question had nothing to do with gender. She pulled out the "woman card" anyway -- and the racism card inadvertently slipped out.

"The Indians have gone wild on that statement," Trump said later.

Although Native American groups were upset about both remarks, they only received an apology from one campaign. (Hint: It wasn't Trump's.)

One of Clinton's big problems is that she comes off as a pre-packaged politician full of canned answers. The woman card is just another focus-group-tested talking point that she can't seem to stop evoking, even when it's unwarranted or out of place. The "woman card" sale just gave Clinton another opportunity to raise the issue.

"The other day, Mr. Trump accused me, of playing the, quote, 'woman card,'" Clinton said last week. "Well, if fighting for women's health care and paid family leave and equal pay is playing the woman card, then deal me in."

Yeah, we got it the first time, Hillary. Thanks.

The constant repetition makes Clinton seem manipulative. We all know that politicians are manipulators, so Clinton's style probably wouldn't be much of an issue in a race against a more traditional opponent. But it might be a liability against Trump, who's not a member of the Washington establishment and has little use for the traditional campaign playbook. When Clinton goes head-to-head against Trump, her talking points are destined to come off as trite and tacky.

It's hard to forget the image of then-Secretary of State Clinton showing up in Geneva in 2009 with a hokey "reset" button intended to symbolize a new start in U.S.-Russian relations. She made a show of asking Russian Foreign Minister Sergei Lavrov to press it with her. Unfortunately, Clinton's team blew the translation and used a Russian word meaning "overcharged" instead of "reset."

A few years later, all hell broke loose with a U.S.-backed putsch in Ukraine and then another in Syria -- two key Russian allies. Maybe a woman card with "whoops, sorry" written on it could have helped smooth things over.

Look, the real "woman card" doesn't come with manipulation or gimmicks. It's played successfully every time a woman closes a business deal because she has an impeccable reputation and her offer beat those of her competitors; or when a woman commands respect from her colleagues because of her experience and depth of knowledge; or when a woman identifies an opportunity that everyone else has missed. Competent women don't have to browbeat men with talking points in order to prove their value.

There's a hitch, though, and it's one that everyone in the private sector -- man or woman -- understands: Respect and success are hard-earned. Time, perseverance, determination and consistency are prerequisites of success, regardless of gender. It's not that there's a lack of successful women -- there's a lack of successful people, period. It's supposed to be that way. In most cases, success is hard-earned, and not everyone is willing to put in the work to make it to the top.

Know what works against women more than anything else? Cronyism, nepotism and the old establishment. These are the characteristics of a rigged system -- the kind of system that gives a woman a shot at reforming a nation's health-care system not because she was elected by the people, but because she happened to be married to the guy who was elected president.

I think I'll use my woman card to bet on the candidate who has pledged to dismantle a system that considers some women more equal than others.