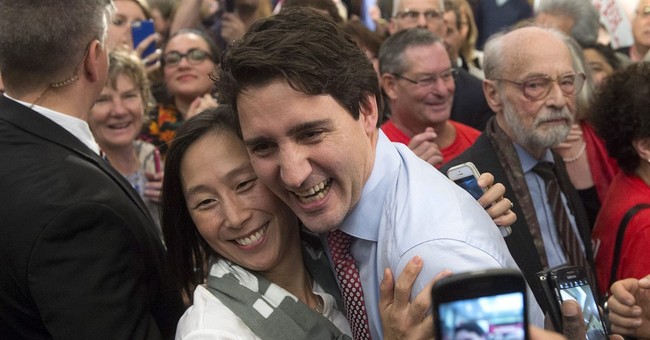 PARIS -- Going through some old emails recently, I came across a note dated May 29, 2001, from one Justin Trudeau, a 29-year-old schoolteacher at West Point Grey Academy in my hometown of Vancouver and the eldest son of former Prime Minister Pierre Trudeau. (This anecdote does nothing to dispel the myth that everyone in Canada knows each other.)

At the time, I was a 26-year-old working for a Canadian federal agency, and I had also enjoyed some exposure as a model. I had written Trudeau asking for snowboarding advice (he taught that, too). "Okay, cutie," his response began, and then he proceeded to offer snowboarding tips, along with some heartfelt details about his mindset in the wake of his father's death the previous year. Trudeau's note was characteristically playful, friendly and warm.

So who is Justin Trudeau, exactly?

On a strictly personal level, I absolutely adore Trudeau. He goes out of his way to make time for people. And even when last-minute constraints impose, he keeps his word. He's refreshingly authentic, hilariously funny, and he doesn't have ego issues or take himself too seriously.

As a member of parliament, he launched himself down the stairs in an interview to demonstrate his amateur stuntman skills. Trudeau pulled a similar stunt (to his wife Sophie's horror) in the lobby of the posh Royal York Hotel in Toronto.

In 2012, Trudeau agreed to fight a senator from the Conservative Party, Patrick Brazeau, in a televised charity boxing match. Oddsmakers made Trudeau a 3-to-1 underdog against Brazeau, who has a black belt in karate and a military background. But Trudeau bloodied his opponent and won by technical knockout.

On a political level, however, Trudeau's actions can be cause for concern. He responded to Europe's Syrian migrant crisis by proposing to take in 25,000 refugees through government sponsorship, with a $250 million investment to help resettle them. This kind of spending -- not to mention a proposal to actually run consecutive national deficits as a growth strategy -- has some Canadians understandably concerned about Trudeau negatively impacting their personal finances.

Despite criticizing Harper's politics of "fear and division" in campaign ads, Trudeau still had the sense to vote in favor of Harper's Barbaric Cultural Practices Act, which bans polygamy, honor killings and some other cultural imports that run contrary to traditional Canadian values. Trudeau also voted in favor of Harper's proposal to strengthen Canada's anti-terrorism legislation in the wake of the October 2014 shootings at Parliament Hill in Ottawa.

Still, Trudeau has denounced Canada's participation in U.S. coalition airstrikes against the Islamic State, claiming that a humanitarian role would be more suitable. No, it wouldn't be. Killing the beheaders and resolving the crisis is the priority. Trudeau isn't entirely wrong to denounce the nearly useless yearlong airstrikes, but the wise approach would be to advocate better intelligence, which has been sorely missing from coalition efforts. On the bright side, Trudeau now has newly elected MP Andrew Leslie, a former lieutenant-general and deputy commander of the NATO International Security Assistance Force in Afghanistan, on his team, quite possibly as the country's next minister of defense.

Trudeau shines when he listens to opposing views. With a majority government negating the need to do so, one can only hope that Trudeau remains open to constructive dissent -- if only because the resulting pragmatism has served him well. He should go out of his way to find people to argue with inside the big centrist Liberal Party tent. Unlike Harper, Trudeau has an ego that could withstand the disagreement.

Speaking of Trudeau's predecessor, all the post-election Harper-bashing is grotesque. Overall, Harper has done an admirable and competent job as prime minister. He has simply been plagued by the kind of scandals and arrogance that unfailingly take hold when a Canadian political party enjoys power for too long.

When Russian President Vladimir Putin went to shake Harper's hand at last year's G-20 retreat in Brisbane, Australia, Harper told him, "I guess I'll shake your hand but I have only one thing to say to you: You need to get out of Ukraine." Not only was it undiplomatic and rude, but it was just plain bad business. Until Obama stopped stonewalling the Keystone XL pipeline -- a long-delayed cornerstone of North American energy independence -- Harper should have insisted on maintaining a powerbroker posture in between the U.S. and Russia. I suspect that Trudeau would have handled the situation much differently.

Trudeau has mastered the art of using rhetoric to appeal to as big a swath of the political spectrum as possible, but this has caused some people to misjudge him. It's his actions that tell the true tale. So far, he seems willing to act in the best interests of the country even if a policy might be at at odds with his personal views. That's what will make Trudeau particularly interesting to watch as Canada's new prime minister.

Biden Announces New Role for Kamala Harris and the Supreme Court
Townhall
Oops: White House issues a 'corrected' chart showing economic growth during Biden's first year
Twitchy
Disney Ditches Potential Dwarfism Community Actors After Peter Dinklage's Woke Rant Over 'Snow White' Remake
Redstate
What if They Had a War But There Was No One There to Begin With?
PJ Media