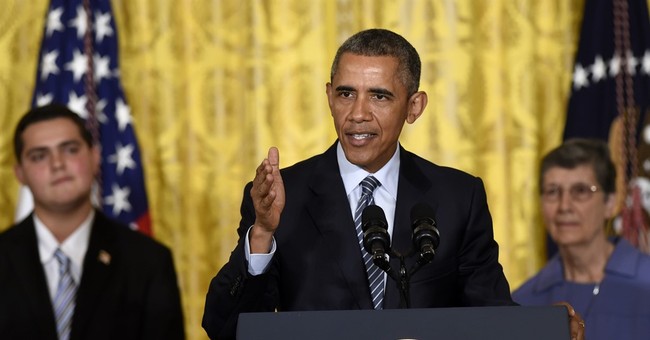 History will remember U.S. President Barack Obama for having unshackled Iran from economic sanctions so it could enjoy the full benefit of its oil revenues -- some $100 billion or so on standby, according to U.S. Treasury estimates. Obama has arguably done more for Iran's energy independence than he has for America's.

"The U.S. is still relying on oil from the Middle East," Patrick Pouyanne, CEO of the French oil company Total, told CNBC earlier this year. "It is not true the U.S. will be independent in oil -- they continue to import."

Good thing that Iran's oil has been freed up. But why hasn't Canada's? What does a Canadian have to do to get some Iranian-style action? Maybe try chanting, "Death to America, eh."

The Obama administration has made a critical mistake on both the economic and security fronts by prioritizing diplomacy with Iran over diplomacy with Canada and the completion of the Keystone XL pipeline, which represents a centerpiece of North American energy independence.

Thanks to Obama's relentless pursuit of a nuclear deal with Iran, other nations can enjoy the Iranian oil rush while the U.S. Congress considers, after the fact, whether to straitjacket American economic interests with a resolution against the Iran deal. While America haggles over the fine print back home, other nations are rushing in. As a result, the extent of America's benefit from this deal remains to be seen.

Obama could have chosen to tie up the Iran deal in red tape for years before ever fully engaging with the five permanent members of the U.N. Security Council plus Germany on the issue. That has been exactly Obama's approach to the Keystone XL pipeline, except that Congress actually approved the pipeline, only to have Obama repeatedly threaten a veto. It is expected that Obama will soon make good on those threats.

So who ultimately benefits from Obama's actions on both Iranian and Canadian fronts? China -- ready with its giant straw to suck up some sweet Iranian crude. Because that's what China does everywhere. The only country that wouldn't let China drink its milkshake unabated is Canada. By 2012, Chinese investments in Canada's oil patch had become so significant that the Canadian government amended the Investment Canada Act, preventing foreign companies from acquiring a majority stake in a Canadian oil sands company. China expressed annoyance and began to redirect some of its energy investments into the oil operations of countries such as Saudi Arabia and Venezuela.

Canada's stance with China was of competitive benefit to the U.S. and to North America. The Canadian attitude has been that if China wants oil, it can be a paying customer -- no free rides. Foreign direct investment can satisfy mutual interests and encourage better relationships between nations, but it also leaves the host vulnerable to subversion by the foreign entity.

So while Canada has sent a clear message to investors and allies that it can be counted on not to sell out security and sovereignty for profit, Obama seems intent on keeping Canada under his veto pen and America dependent on Middle Eastern oil, with all the headaches that it entails -- including meddling with the Islamic State and other terrorist groups.

"A positive decision has not been rendered (on the Keystone XL pipeline) for a very long time, that's obviously not a hopeful sign," Canadian Prime Minister Stephen Harper told Bloomberg News last week. "I think there's very peculiar politics of this particular administration."

Well, "peculiar" is one word for it. Environmentalists who usually have no use for corporations have found themselves in bed with billionaire Obama campaign donors such as Warren Buffett and Tom Steyer, whose business interests include Keystone alternatives. Rail cars that can't seem to stay upright or unexploded are treated like the gold standard of fuel transportation, not to be jeopardized by an alternative.

China went along for the ride in the Iran negotiations -- largely keeping quiet, according to sources, while Obama and U.S. Secretary of State John Kerry led the way. Since the U.S. has now taken a step backward from energy independence, maybe Obama's billionaire buddies and their environmental activist pawns can take responsibility for making sure oil is shipped safely to America, with no spills or other environmental mishaps. Or maybe they can head to the Middle East to protest the Islamic State's environmentally unfriendly destruction of entire pipelines, since these eco-warriors have all done their best to ensure that America will still depend on Middle Eastern oil for the foreseeable future.

Throughout the Obama presidency, it's been hard to decipher his foreign policy. But I'd love to know how liberating Iranian oil for China and alienating next-door neighbor Canada fits into Obama's grand plan.