Hollywood Out of Its Political Depth on Oscar Night 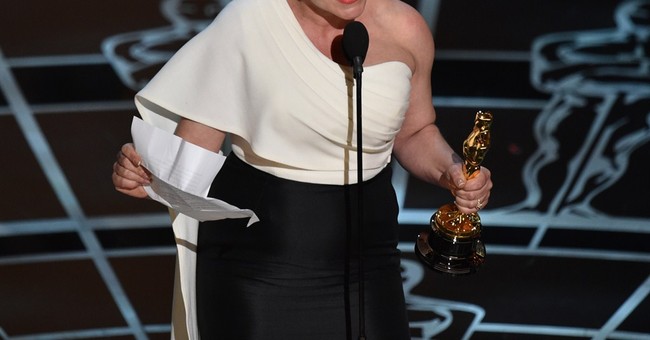 The Academy Awards represent the annual celebration of the most formidable soft-power cultural force the world has ever known: Hollywood. If there's one thing that shouldn't be expected from Hollywood, it's depth -- particularly of the political kind. What we can expect instead is mostly pathetic pandering to the worst of emotivist "yay/boo" morality, masquerading as political insight.

Consider the winner in the Best Documentary category, "Citizenfour," about former NSA contractor turned defector Edward Snowden. Although it's possible that the Academy's choice was made on the nonpolitical merits of the film, this is Hollywood we're talking about. Do you think that it dawned on any of the Academy voters that one of the films nominated for Best Picture invalidates the entire rationale for Snowden's theft and leaking of top-secret U.S. intelligence?

While Snowden has been celebrated in Hollywood, it's scarcely been mentioned that the heroism of Alan Turing -- the real-life British codebreaker on whom the film "The Imitation Game" is based -- is significant in large part due to his dedication to keeping his mouth shut in the interests of national security. After Turing created what many consider to be the first modern computer to crack the Germans' Enigma cipher machine during World War II, he and his team kept quiet about it so that Allied forces could continue to fool their enemies into thinking that their compromised communications were still secure.

Turing didn't run off to a hostile nation when the war had ended and whine about his government's research activities at Bletchley Park, or their hypothetical potential for misuse. Moreover, given his conviction by the British government for "indecency" (homosexuality) and subsequent chemical castration, Turing had all the more reason to leverage his position. Contrast this with Snowden, whose moral stand ends with the idea of judicial accountability. He fled to Hong Kong with millions of pages of top-secret intelligence for which he couldn't possibly understand all the implications of publication.

Turing's actions have stood the moral test of time, not merely the emotional test of the moment. But in the Hollywood of the attention-deficit era, Snowden is indeed this minute's hero.


Hollywood's shallow political culture also extends to what's said onstage. For all the cheering of Best Supporting Actress winner Patricia Arquette's speech evoking the need for wage equality, has anyone bothered to ask her what she was talking about? Or is everyone happy just assuming and projecting? Hollywood went equally gaga over U.S. President Barack Obama during his 2008 campaign and his repeated chanting of "hope and change," which could mean whatever the celebrities wanted it to mean.

For all their excitement in response, presumably Meryl Streep and Jennifer Lopez knew what Arquette was referring to. Have they heard Arquette's story of being screwed out of equal pay? Because we sure didn't. Or have they been there themselves? Or were these multimillionaires just sympathizing with us little people? We'll never know, I suppose. Apparently a slogan is good enough.

Then consider Sean Penn's off-color "green card" remark while presenting the Best Picture award to his good friend, "Birdman" director and Mexican national Alejandro Gonzalez Inarritu. Social media and the press blew up over Penn's perceived lack of taste, with activists and celebrities offering their highly personal explanations for why his remarks were immoral, in true cultural emotivist style.

Penn would have been wise to heed the advice of Oscar Wilde, who once suggested that people should be free to do what they want as long as they don't do it in the streets and frighten the horses. Sean Penn scared the horses -- big time. Remarkably, no horses were startled when Penn was punching out paparazzi left and right or writing a vicious open hate letter to then-President George W. Bush. But this time, the masses were left to wonder why Penn didn't crack a joke about the green cards of the Brits or Aussies in the audience. As with Arquette's comments, there was a slight risk of political insight in Penn's flippant remark. Why didn't he humor us, if not torture us, with a little elaboration?

The escape hatch for Penn, Arquette and other celebs who trigger emotivist reactions is exactly what would be required to have seen the irony of honoring Snowden and Turing in the same show: depth. Explain your remarks or your joke, however off-color. Surely those words represent some deeper thoughts. And while some of us may still not agree with those thoughts, they'll at least have a shot at sparking a debate of substance.