Is U.S. Being Duped Into Funding Jihadist Startup? 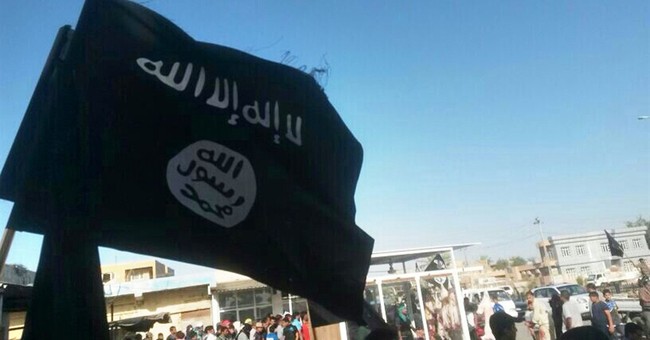 The Islamic terrorist army often referred to as the Islamic State of Iraq and the Levant (ISIL) has made a faster womb-to-superstardom ascension than Justin Bieber. Largely unheard of just a few weeks ago, the group is now the self-proclaimed new ruler of an Islamic caliphate, or republic, extending across Iraq and Syria. These countries currently have internationally recognized heads of state -- but, you know, whatever, man. It's not like U.S. President Barack Obama is going to stop ISIL. In fact, he's asking Congress to give it $500 million, under the guise of funding the "Syrian opposition."

Recipients of this money will be carefully vetted, of course. Just like they were during Operation Syraqi Failstorm -- Part One.

Russia responded with a warning against such funding, with Russian President Vladimir Putin no doubt thinking, "Did you not just see this movie already, bro?" It's the one in which ISIL takes the cash, toys and training from the Syrian conflict and makes its way toward Baghdad.

Russia's Foreign Ministry spelled it out in a statement this week: "Given the real situation on the ground, these considerable funds, if allocated, would in fact serve entirely to strengthen the terrorist 'caliphate' proclaimed by the ISIL. Under the circumstances in which terrorist and extremist groups have secured their dominant role among anti-governmental forces in Syria, the best arms and best prepared fighters would end up with them."

By insisting on funding this fiasco, Obama is also about to drop another load of fail onto his so-called economic "pivot" to Asia. While American companies are already spending millions to fight terrorism in Southeast Asia (so they can safely build infrastructure that will one day be nationalized to the benefit of China and Russia), Indonesian extremists are traveling to Syria, joining ISIL and becoming the ultimate benefactors of the American largesse that Obama is now asking Congress to approve.

Unless the end goal is to foment Islamic terrorism from the Middle East to Southeast Asia, what exactly is this administration hoping to achieve? It's getting its backside handed to it by the jihadist version of a startup, and Obama risks becoming its venture capitalist in chief.

Here's some of what investors -- including Gulf states -- get for their money.

ISIL circulated a map on Twitter showing its short-term empire expansion goals, which include Portugal, Spain, the Balkans, Eastern Europe, India, roughly half of Africa, former Soviet satellite states and part of China. The group has already attributed a new name to each entity. Did I mention that's just the FIVE-year plan?

The ISIL leader, whose stage name, Abu Bakr al-Baghdadi, is obviously his destiny, is said to be in his early-40s, with a Ph.D. in Islamic studies. Not one to follow orders of some stuffy old imam, al-Baghdadi apparently preferred the entrepreneurial approach to the terror business and struck out on his own with some social-media-savvy kids who know how to make really slick propaganda videos of executions.

ISIL supporters created a Twitter hashtag, #CalamityWillBefallUS, now linked to various accounts threatening everyone from Obama to the CIA. Many of these supporters spend literally all day arguing online with the finest trolls in the West. An elaborate line of ISIL T-shirts and hoodies keeps popping up on Facebook as quickly as it can be (repeatedly) taken down.

The Obama administration has been so slow, cumbersome and basically clueless about foreign affairs that an asymmetric group of narcissistic terrorist kids with visions of grandeur is fearlessly running circles around it. Meanwhile, Obama's team is doing everything that it can to avoid showing any sign of actual strength -- referring to Special Forces being sent to the area as "advisers."

Is this a lame attempt at deception, or a successful attempt at cluelessness? It's hard to tell. U.S. Secretary of State John Kerry admitted on television that the ISIL takeover of Iraq came as a surprise that "nobody expected," but CIA spokesman Dean Boyd apparently begs to differ.

"Anyone who has had access to and actually read the full extent of CIA intelligence products on ISIL and Iraq should not have been surprised by the current situation," Boyd said.

Meanwhile, ISIL even found the left's favorite Iraq War talking point: Saddam Hussein's old weapons of mass destruction production facility. "We remain concerned about the seizure of any military site by the ISIL," U.S. State Department spokeswoman Jen Psaki told the Wall Street Journal. "We do not believe that the complex contains (chemical weapons) materials of military value and it would be very difficult, if not impossible, to safely move the materials."

That's nice. Better hope that ISIL doesn't decide to unsafely move them in the same way that Enola Gay "unsafely moved" some material over Hiroshima and Nagasaki.

When is this show going to get canceled already? Isn't $500 million a high price for U.S. taxpayers to pay for yet another season of this screw-up dramedy.