Obama late to the Realpolitik Table in Saudi Arabia 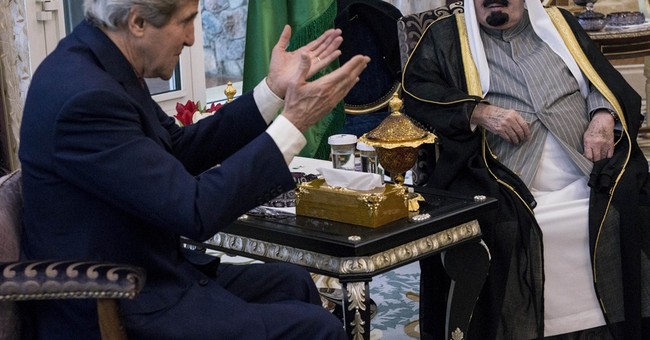 PARIS -- Later this month, U.S. President Barack Obama will visit Riyadh, Saudi Arabia. Here's hoping he decides to stay home and help his daughters with their homework instead.

America's decreasing influence in the Middle East and Eurasia might be the result of deliberate strategic policy. Or it's simply ineptitude -- in which case it's infinitely better for indecisive paralysis to prevail over uninformed proactivity. Either way, it's not a bad thing.

The Middle East is a mess, but what else is new? The best news for America is that it doesn't need to care as much. Middle Eastern oil is increasingly less important to America. The best economic opportunities for America in the Middle East now are for private-sector security contractors and mercenaries, plus whatever industries might spring up in the wake of any major conflict that sweeps out an unfavorable status quo.

But as we've already seen with Syria, there are some places where the effort to change the status quo is just too costly and the outcome too uncertain. This is particularly true with regimes that enjoy the military and economic support of superpowers such as Russia or China. If you're going to get a foot in the door by kicking up some dust to ultimately create a new market for your country's multinationals (under the guise of humanitarianism), then the French have the right idea: Stick with Africa, where there's lots of low-hanging fruit and fewer big branches to get in your way.

In the Middle East, there are already regional powers (like Saudi Arabia) and superpowers (like Russia) that will each play their cards one at a time, exclusively for their own benefit. The odds are slim that they're going to let the West have a hand in what is perceived to be a zero-sum game in their own backyard.

After being at each other's throats, new moves suggest that Saudi Arabia and Russia might be exploring a nascent strategy of cooperation in order to increase their regional influence.

America has succeeded in aggravating both countries recently. The Saudis were so annoyed over Obama prematurely declaring Iranian nuclear talks a success, and naively suggesting that it would put Iran on the path to being bomb-free, that there was speculation the Saudis might order up a nuke of their own from the program they have been funding in Pakistan. Russian President Vladimir Putin remains miffed about America's support of civil unrest in neighboring Ukraine, which could potentially eradicate any buffer between the NATO alliance and Russia.

Russia was further aggravated by America's cooperation with Saudi-sponsored terrorists to fight Bashar al-Assad's regime in Syria -- a mess that Russia is now tasked with cleaning up.

When Saudi-funded Chechen Islamic terrorist leader Doku Umarov was bombing civilian targets in the lead-up to the Sochi Olympics, several media outlets had already reported that Saudi intelligence chief Bandar bin Sultan offered to reel in any potential Olympic terror in exchange for Russia's withdrawal of support for Assad in Syria and for Russian non-interference in the Egyptian military's overthrow of the Muslim Brotherhood -- with the potential for future cooperation between Russia and Saudi Arabia on oil pricing and production.

So, you might be thinking, "How could Russia and Saudi Arabia possibly cooperate with the recent history between them?"

Well, this month, in a bizarre about-face, a Saudi royal commission made a list naming and shaming Islamic terror groups -- particularly those in Syria, and especially those that Russia hates for causing headaches in Syria and in Russia's Northern Caucasus region. The move effectively criminalizes any Saudi participation in these terror groups.

The Saudi and Iranian regimes can't stand each other, but Russia has every interest in exerting control and influence over economic partner Iran -- particularly now that Iranian-funded Hezbollah insurgents in Syria are primarily Russia's problem.

In a recent interview with France 24, Iraqi Prime Minister Nouri Al-Maliki criticized Qatar and Saudi Arabia for supporting fighters in his country. The Saudis are now attempting to separate themselves from the issue by publicly denouncing their Gulf Cooperation Council partner, Qatar. Saudi Arabia, the United Arab Emirates and Bahrain say they are withdrawing their diplomatic envoys from Qatar. According to Al Jazeera, a statement from the Qatar government said the removal of diplomats was due to "a difference of opinion and position on a number of issues outside the Gulf Cooperation Council."

Time will tell whether Russia is behind all the recent wheeling and dealing in the region, and if realpolitik is prevailing over ideological differences. But with Saudi Arabia looking to end the Assad regime in Syria and minimize Iran's influence, and with Russia's focus on minimizing Islamic extremist activity in the region, it's not such a bad thing that Obama is behind the curve in dealing with the dirty work in the Middle East.