The Biggest Lies About the Israeli-Palestinian Conflict 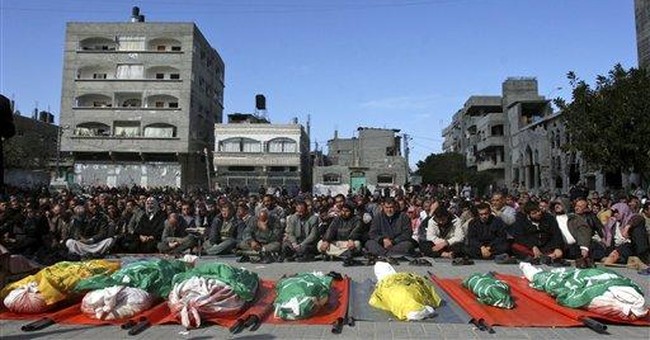 The latest chapter in the conflict between the governments of Israel and Palestine is generating loads of media ink – and huge, whopping lies. Here’s a roundup of the top myths related to this war:

Congressman and former GOP Presidential candidate, Ron Paul, suggested to Press TV – the official propaganda arm of Iranian President Mahmoud Ahmadinejad – that Israel’s actions were “preemptive”. His logic: Israel has nukes and Hamas doesn’t, so it’s unfair. Look, a war isn’t automatically “preemptive” just because one party was dumb enough to pick a fight it can’t win. I mean, do you want your jihad, or don’t you? This is getting confusing. It also isn’t the first time Rep. Paul has lamented the lack of nuclear power in other Middle Eastern countries. In early 2007, on Fox News, Rep. Paul told me that he didn’t have a problem with Iran possessing nukes. The whole idea of Israel’s nuclear advantage is moot, until Israel nukes Gaza – and they haven’t. If you ask me, the “Zionists” are showing unbelievable restraint.

Press TV says that 25% of deaths in Gaza have been civilian. These terrorists could severely curtail the civilian killing at any time by getting out there and taking their jihad like real men, rather than hiding around women and children like cowards. Hamas’ lack of warfare decorum, and insistence on guerilla tactics when push comes to shove, really isn’t Israel’s problem. Israel is so caring and humane that even in the midst of war, they paused their military efforts to provide civilians with aid.

3) Hamas was just minding its own business.

Besides having fired rockets into Israel to start all of this, Hamas is second only to Iran’s Ahmadinejad – and maybe the odd Al Qaeda member – as the heavyweight trash-talking champion of the world. You’d think that Hamas would have learned a lesson during last year’s Olympics from French swimmer/trash-talker Alain Bernard, right before he was blown out of the water in the 4x100 freestyle relay by Michael Phelps and gang. The only one who ever got away with incessant trash-talk was Muhammad Ali – and that’s because his mouth was writing checks that he was actually capable of cashing. Hamas’ spokesman recently said: “Your incursion to Gaza will not be a picnic, and Gaza will be your cemetery, God willing. You have no choice but to end this aggression and end the siege without any condition. You will not live in peace until our Palestinian people live in peace.” Whatever. I’m sure if Israel was capable of firing a strategic missile right into this guy’s gaping pie hole, the entire world would cheer. Until technology improves, we’ll have to settle for something a bit messier.

3) Iran has nothing to do with this.

While on vacation in Vancouver, BC, I actually heard a local talk-radio host say, “The next thing you know, the USA will link Hamas with Iran!” Actually, Hamas has saved these Leftists the trouble of blowing out a few more brain cells coming up with conspiracy theories, and has already publicly linked itself with Iran. A Sunday Times of London article from last March quotes a senior Hamas commander: ““Iran is our mother. She gives us information, military supplies and financial support.”

The same radio talk-show host above suggested that Israel’s military incursion into Iran is part of a larger conspiracy by President Bush to attack Iran and steal more oil. Because yeah, it makes total sense that Bush, on his way out of office, would conspire with his close pal Barack Obama to make the government of Israel attack Hamas so Bush can get his hands on more oil in the Middle East. Naturally, the much more simple argument that Hamas visibly fired rockets into Israel and the Israelis got fed up doesn’t make enough sense.

5) Obama is waiting in the wings, and will save the world shortly.

About the only thing on which Al-Qaeda and the GOP have ever agreed is how useless Obama is, and how pathetically he has been propped up by the American media. Ayman al-Zawahiri said in a recent audio message: “This is Obama whom the American machine of lies tried to portray as the rescuer who will change the policy of America. He kills your brothers and sisters in Gaza mercilessly and without affection.” Not only has Obama failed miserably in appealing to psychotic terrorists’ gentler and more reasonable instincts, but he’s also apparently “killing” people before even having taken the oath of office.

6) George Bush has “studiously ignored the whole problem” of Israel vs. Palestine.

Or so says new agey expert turned political analyst, Deepak Chopra, in this week’s San Francisco Chronicle. No mention of the Annapolis Conference that Bush held in November 2007 with representatives of 49 countries to develop a new Israeli-Palestinian peace plan. No mention of Condoleezza Rice’s eight trips to the area that year. But none of this matters, because Chopra – a recognized expert in such things as “self-awareness” - concluded by humbly declaring his own analysis “irrefutable”.

7) America doesn’t give the Palestinians any money.

No country has been as generous with aid to the Palestinians as America. And Bush just gave Palestinian refugees another $85 million through the United Nations. What, you’re whining that America isn’t specifically giving money to the terrorist government Hamas so it can buy better rockets? How about getting that sentiment out of your system by going out and buying your teenager a new Lamborghini so he can promptly tear out of your driveway and wrap it around a pole?