Misogynist Media Show Their Hypocrisy in Attacks Against FLOTUS

Rachel Campos-Duffy
|
Posted: Dec 28, 2018 12:35 PM
Share   Tweet
The opinions expressed by columnists are their own and do not necessarily represent the views of Townhall.com. 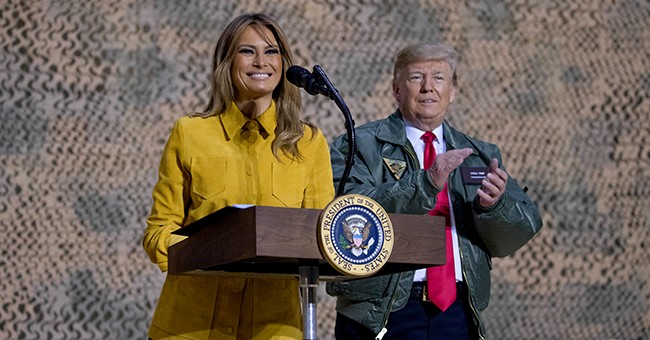 The mainstream media are finding out that it isn’t as easy to bully Melania Trump as they thought it would be.

Throughout Donald Trump’s presidency, the media have treated the First Lady with utter disdain, ignoring the many positive initiatives she has spearheaded in order to focus on trivialities like her choice of clothing or Christmas decorations.

Melania has endured the abuse with remarkable patience, but the latest hit piece — courtesy of none other than CNN — drew a sharp rebuke from her deputy chief of staff for communications, Stephanie Grisham.

The First Lady recently acknowledged in an interview that “opportunists who are using my name” are the hardest part of her job, prompting CNN contributor Kate Andersen Brower to declare that Melania “proved that she doesn’t understand what it means to be first lady.”

Grisham immediately fired back with a scathing opinion article of her own, pointing out that Brower and her fellow liberal media hacks are the ones who truly don’t seem to understand their jobs.

Melania Trump has, in fact, executed her duties as First Lady flawlessly. As White House hostess, she has put on a successful state dinner, overseen dozens of holiday parties, and led preservation and restoration efforts at the historical mansion.

Grisham also points out that the First Lady has been a strong proponent of efforts to combat the opioid crisis, conducting listening sessions with families that have been affected and speaking directly to young people about the dangers of addiction.

Yet, rather than reporting on the many good things that Melania Trump has used her position to accomplish, the liberal media have chosen instead to portray her as vapid and out-of-touch. Perhaps because the First Lady is a former model, they’ve been particularly concerned with her appearance — a misogynist impulse that those same media outlets would appropriately decry in just about any other context.

The examples of attacks against the First Lady abound, and Grisham highlights some of the most egregious, such as the time last year when the media became fixated on the type of heels she wore while boarding Air Force One on her way to comfort hurricane victims in Texas.

More recently, when Melania went on a goodwill trip to highlight aid efforts in Africa, the media obsessed over her attire rather than the health, education, and conservation efforts she was there to promote.

Even Michelle Obama has gotten in on the act, derisively remarking “Bye Felicia” when she was asked about her recollection of Donald Trump’s inauguration during a recent interview. Apparently the former First Lady doesn’t find it useful to “go high” when she’s dealing with someone who radiates grace and humility the way Melania Trump does.

Our First Lady has too much class to complain about the media’s perfidy — even in response to a direct question she referred merely to “opportunists” instead of calling out the media by name — but that very restraint is taken as a sign of weakness by her antagonists, who see her as fair game in their scorched-earth campaign against President Trump.

Luckily, Melania’s staff is part of Team Trump, and she has many loyal and loving defenders around the country who will not shy away from countering the lies and distortions told by the mainstream media.

Rachel Campos-Duffy is a FOX News Contributor and a mother of eight. Her debut children’s book – inspired by real life events - is a story about a little girl’s adventure inside the US Capitol where she learns lessons about patriotism, courage and her immigrant father’s journey to citizenship.