Rachel Alexander
|
Posted: May 31, 2021 12:01 AM
Share   Tweet
The opinions expressed by columnists are their own and do not necessarily represent the views of Townhall.com. 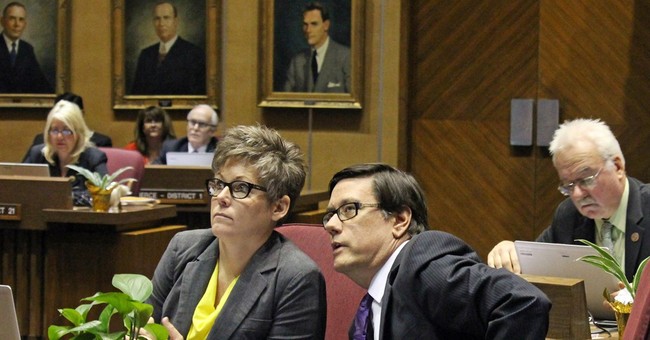 Some areas of the country haven’t given up on investigating voter fraud during the presidential election, including Arizona and Georgia. But it’s not easy, because the left is going all out to stop them. Here in Arizona, the main opposition is coming from the Arizona Secretary of State, far left Katie Hobbs. This woman is frightening. She is trying to make a name for herself since she wants to run for governor in 2022.

The Arizona Senate ordered an audit of Maricopa County ballots earlier this year, taking possession of 2.1 million ballots and nearly 400 election machines and turning them over to be audited by cyber firms. It just doesn’t seem very plausible that Joe Biden won in Maricopa County, considering it’s a Republican stronghold (the words of CBS) with more registered Republicans than Democrats, and considering how well Republicans performed in other races here. As of February, there were just over 909,658 registered Republicans to 814,101 Democrats, a striking difference.

The Maricopa County Supervisors, who many people locally believe are extremely corrupt and composed of RINOs, have fought the audit tooth and nail. They refused to comply with legislative subpoenas, forcing the issue into court. Senate President Karen Fann told them there was a lack of chain of custody for ballots, cut security seals and more ballot anomalies. The number of ballots listed on pink sheets in the boxes didn’t always match the number of ballots, and it was mostly a higher number (one example provided was off by 35 ballots). Fann also said the county had deleted databases, which Donald Trump repeated. Fortunately, CyFIR, one of the teams handling the audit, was able to recover the deleted files.

Hobbs isn’t defending the law but is stonewalling just like the supervisors. She received $6 million in CARES money from Governor Doug Ducey to spend on election issues so has a lot of leeway to wreak havoc. She creates all kinds of issues, threatening lawsuits and constantly claiming there is something wrong with every bit of the audit process. She has attempted to get Biden’s DOJ involved. Ken Bennett, a former Republican secretary of state himself with excellent credibility in the state, is overseeing the process. He has dismissed her rants as baseless.

Hobbs apparently knows no bounds, she reportedly dishonestly tried to sneak in a paid elections expert to the audit by pretending to be a reporter.

Hobbs is going all out to destroy Arizona Attorney General Mark Brnovich because of his proactive efforts stopping election fraud, such as his lawsuit suing the Democratic National Committee over ballot harvesting, currently at the U.S. Supreme Court. Her vengeance against him started before the election, when she became furious that Brnovich wouldn’t prosecute Trump. Earlier this year, Brnovich told the Maricopa County Supervisors to increase the number of ballots counted by hand from 2% to 5%, but they refused. Then Brnovich declared that the legislative branch has the authority to conduct the audit. Hobbs demanded that Brnovich shut down the audit due to her rants, but he didn’t. He said to her in a letter, “Any such complaints ... must be based on credible facts and not conjecture of politics” and pointed to the separation of powers granting the legislature this authority.

It’s gotten so bad the legislature is now stripping Hobbs of her ability to defend election lawsuits and transferring those powers to the Arizona Attorney General. Another provision will remove her authority over the museum at the state capitol and turn it over to the legislature. The House and Senate Appropriations Committees passed bills doing this that will be part of a full budget proposal expected to be signed into law.

A lot of Arizonans believe there was voter fraud. High Ground, a public affairs firm in the state that is not conservative, found that 42% of Arizonans in March thought there was “significant fraud” in the election, as did 78% of Republicans.

The audit is being funded here and there are nine live cameras here. It is expected to finish by the end of June. While it’s too late to change the election results, it’s important to ensure that this never happens again, or there will never be a Republican president again. The investigation must continue. The fact the MSM is not reporting that boxes of ballots have pink slips listing counts of ballots in boxes that are off by 35 and other amounts is an incredible whitewash that can’t be dismissed as a “conspiracy theory” as Hobbs likes to say.

Hobbs is using classic tactics that far left Saul Alinsky laid out in his Rules for Radicals. She’s furious the left-leaning judiciary is not bending to her demands as she expected, so now she’s turning to the left-wing Arizona State Bar. Arizona as well as the ballot audit going on in Georgia are currently ground zero for stopping election fraud. Keep the focus on this fraud until she is stopped.