Rachel Alexander
|
Posted: Jan 18, 2021 12:01 AM
Share   Tweet
The opinions expressed by columnists are their own and do not necessarily represent the views of Townhall.com. 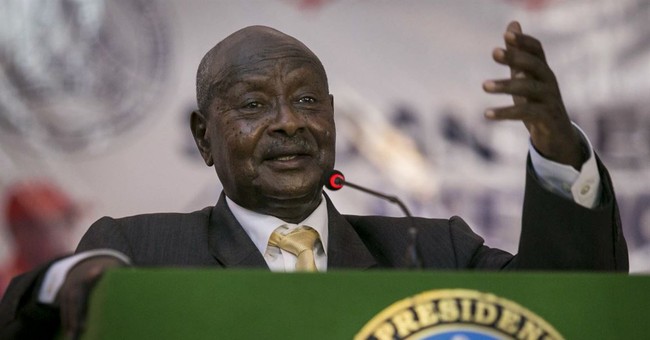 The MSM breathlessly reported that Ugandan President Yoweri Museveni shut down social media prior to the January 14th presidential election, comparing the move to President Trump’s criticisms of social media here. But the reality is Museveni’s actions are more comparable to what the left is doing to conservatives and Trump. Museveni is just more bold about it. The left here finds ways to undermine our republic and elections that appear to be legal and constitutional, as long as you believe their claims. If you don’t believe them, you are labeled a conspiracy theorist and risk being doxed.

Musevani said he shut down social media because it was being used to organize unrest. He took it a step further, completely shutting down the internet a day before the election. Similarly, big tech is kicking conservatives here off of social media and other platforms claiming they are using them to organize violent election protests. The left here gets away with banning conservatives because big tech, which is owned by the left, is ostensibly private companies. But the reality is almost all speech now takes place there, hence the nickname “big tech oligarchs.”

Musevani’s government is using facial recognition technology to crack down on dissent. The left here used invasive ways to figure out who was at the Capitol protest and prosecute or dox them — including mere attendees, not just those who entered the building — such as by hacking Parler and using the facial recognition site Pimeyes.

Musevani has been in office since 1986, having convinced — some say bribed — the Ugandan parliament to remove presidential term limits and amend the constitution to remove the age limit. His opponents over the years have accused him of voter fraud, including ballot stuffing and beating their campaign workers. Musevani’s main opponent Bobi Wine was in the lead at first, but that changed hours later after the military got involved according to Wine. Wine says he has video evidence of the military adding ballots and chasing people away from polling stations. The U.S. canceled its observation of the Ugandan election, saying the vote would lack accountability and transparency due to the denial of more than 75% of its accreditations.

Musevani said he tried to stop Wine from campaigning because Wine violated COVID-19 health measures, such as by holding rallies. However, Musevani held campaign events himself. Musevani regularly sent the police after Wine using that ruse. Wine said he was beaten and pepper sprayed multiple times on the campaign trail. The police forcibly removed him from his car while gunshots were fired. Another opposition candidate, Patrick Oboi Amuriat, was also arrested for violating COVID-19 restrictions.

The U.N. criticized Uganda’s COVID-19 restrictions, saying they had been used to curb dissent prior to the election. Here, the leftists in charge of state government cited COVID-19 concerns in order to drastically increase vote by mail, making it easier to commit fraud.

Wine’s attorney Nicholas Opiyo was arrested last month for money laundering. As we know, the left targets the right here using process crimes like that. It’s not difficult since the left dominates the legal system. Opiyo’s arrest was condemned internationally. The U.N. said his arrest and arrests of Musevani’s political opponents “appear to be strictly related to the electoral context, and fictitious charges being used to justify them.” Here in the U.S., the left targets prominent conservatives with prosecution, especially members of Congress in order to defeat their reelection. Prosecutors in New York are preparing to prosecute Trump.

When Wine’s supporters attempted to protest, the military was sent to beat them, claiming they were violent and needed to be suppressed. Many died. Wine’s bodyguard was run over and killed by a military truck, but the government said he fell. Are we headed in this direction? Capitol Police fatally shot a woman who may have unlawfully entered the Capitol building on January 6 to protest the election.

A former rock star, Wine released a song in 2017 entitled “Ghetto President.” It criticized Museveni, advocating for an end to corruption, high unemployment and free speech violations in Uganda. Within a month, the Ugandan Communications Commission banned it. Here in the U.S., heavy metal singer and vocal Trump supporter Tommy Vext was driven out of his band due to his outspoken opinions critical of the left. He said because he was a black man questioning the lockdowns and Black Lives Matter rioting, the cancel culture came after his band. “I was threatened, ridiculed, blackmailed and smear campaigns were launched to destroy my career and my livelihood.” He’s been able to recover fortunately, by starting a GoFundMe to finance a solo album.

Twitter had the nerve to issue a statement denouncing Uganda for blocking social media. This is incredibly hypocritical considering Twitter just banned the president of the United States and continues to ban tens of thousands of Trump supporters. Twitter said in part, “We strongly condemn internet shutdowns – they are hugely harmful, violate basic human rights and the principles of the #OpenInternet.” Another tweet stated, “Access to information and freedom of expression, including the public conversation on Twitter, is never more important than during democratic processes, particularly elections.” This was also hypocritical considering how many prominent conservative accounts Twitter suspended before our presidential election.

Predictably, Musevani won reelection by a large margin. Wine denounced the election fraud, "I can call on all Ugandans to reject the announcement that has been made by the electoral commission ... to reject them with the contempt with which it deserves." Sure enough, the government retaliated by sending the military to his home to place him under house arrest. The government denies it, however, claiming the soldiers are merely providing him with security.

So why does everyone see through the sleazy actions in Uganda but not here? It may be because the MSM here controls much of the narrative, and they hide, mischaracterize and minimize the wrongdoing. Musevani is more blatant about directly using the government to conduct abuse. The left here is sneakier. They work behind the scenes and through large powerful corporations. They don’t murder their opponents, although Antifa beats Trump supporters. They’ve figured out how to undermine the Constitution without making it look like they are violating it. The similarities to Third World elections are disturbing and growing.