Rachel Alexander
|
Posted: Dec 28, 2020 12:01 AM
Share   Tweet
The opinions expressed by columnists are their own and do not necessarily represent the views of Townhall.com. 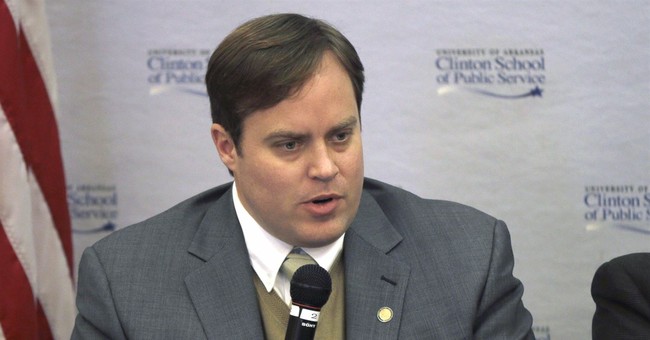 As it becomes obvious that President Trump may not be able to overcome the fraud stopping him from winning reelection, he is pardoning and commuting the sentences of conservatives wrongly targeted through the legal system. Last week, he commuted the sentence of conservative former Congressman Steve Stockman, who had served almost three years of a 10-year prison sentence.

Now he needs to pardon Jon Woods, a conservative former Arkansas state legislator. Woods is serving an 18-year sentence for process crimes involving a Christian college. Sound familiar? The left loves to target conservatives involved with Christian activities, and if they can’t get them on real crimes, they get them on “process crimes.” Woods was found guilty of conspiracy to commit mail fraud, wire fraud and money laundering. That’s right, no real crime, just the fact something was mailed, some phone calls were made and some money was spent. For example, “money laundering” sounds scary, but all it means is he used a cashier’s check to pay for something coming out of his own bank account (he was paying back someone for something unrelated) because it was a large check and the recipient required it.

This is just like what happened to former General Michael Flynn, Trump’s short-lived national security advisor. He was accused of colluding with Russia, which no one believed and has since been disproven in regards to the Trump administration. So they got him on the process crime of lying about having a conversation with a Russian. He was eventually exonerated when it came out that he hadn’t even lied about that.

Prosecutors accused Woods of trying to profit from state money given to nonprofit agencies. They said Woods directed $200,000 in state funds to Ecclesia, a Christian college, and a nonprofit that operates the school in exchange for cash and other benefits. The benefits were alleged to involve a consulting fee payment of $50,000 from the school’s president to a “shell” consulting company owned by Randall Shelton Jr., who then transferred $40,000 to Woods. There were other attempts to transfer state funds to nonprofits, but they were unsuccessful.

Nine Arkansas legislators directed $592,500 toward the school, which was a common practice at the time when legislators were instructed to recommend nonprofits or government entities worthy of receiving leftover money from the general fund. They didn’t even have the authority to transfer the funds; they merely recommended worthy candidates and an independent board made up of county judges, mayors, and community leaders made the decisions.

Ecclesia is a respected college, whose board members have included WallBuilders founder David Barton, author Eric Metaxas, and singer Pat Boone. Shelton’s consulting company was not a “shell,” but had just landed a commitment from the Walton Foundation (Walmart’s charity) to take part in a fundraiser for the college. The charity was about to donate a large sum of money when the investigation scared it off. Shelton’s payment to Woods had nothing to do with the college receiving state funds. The two had been longtime associates and the money was a loan, which Woods later paid back.

The case against Woods relied on the testimony of another former legislator, Micah Neal, who was also involved. Neal was worried about being prosecuted himself. He cooperated with government agents and secretly recorded Woods for over a year — but tellingly never caught Woods confessing to anything. Yet he still testified that a conversation had occurred between him and Woods implicating Woods.

The truth is, Woods told the court that there were conversations recorded with him that would actually exonerate him. His recorded conversations were stored on a laptop belonging to FBI Agent Robert Cessario, who was working with Neal. The judge discovered that Cessario had failed to turn over 79 recordings. The judge ordered Cessario to turn the laptop over. Cessario refused, and instead wiped the laptop, brazenly admitting so to the judge! He’d also taken it to a professional computer repair shop and paid them to wipe it. His excuse was that he wanted to remove personal medical records. This was odd since Cessario was about to file a medical malpractice lawsuit, so his medical issues would become public anyway. The judge found that Neal had acted in bad faith, but failed to throw out the case. He also withheld all of this from the jury. Woods was convicted solely based on the testimony of Neal.

Since Woods refused to cave in and plead guilty in order to get a lighter sentence, prosecutors threw the book at him. A judge appointed by Barack Obama sentenced him in 2017 to over 18 years in prison. In contrast, Neal pled guilty to merely one count of public corruption and walked away with only home confinement and probation.

The National Association of Criminal Defense Attorneys, no friend of conservatives, was so appalled by the case that they requested to file an amicus curiae brief in his appeal. They said the government’s behavior by intentionally destroying the computer evidence was so outrageous that the only remedy is to dismiss the case.

Patty Wootton, who worked as a court supervisor for eight years in the area, was hired as a consultant on Woods’ case. She said, “this federal judge was not like any judge I had ever seen … The judge’s bias was overwhelmingly obvious.”

Sadly, Woods was not the only target. The president of Ecclesia, Oren Paris III, was sentenced to three years in prison. He pled guilty so prosecutors would not withhold $1.5 million in PELL grants from Ecclesia. His famous sister, the singer-songwriter Twila Paris, posted a supportive statement on Facebook. The consultant Shelton is serving a six-year sentence.

Woods had a stellar reputation in the Arkansas community. Democrat Conner Eldridge, the U.S. Attorney who originally brought the charges, wanted to run for U.S. Senate against Republican Sen. John Boozman. Sources in the community say that he saw tarnishing Ecclesia as a way to hurt Boozman since Boozman and a close network of Republicans were associated with the school. Eldridge ultimately lost the race.

This is a classic example of how the left operates on the dark side. They target conservatives, especially Christian conservatives, through the criminal justice system because they know the legal system is dominated by the left. Republican politicians have a bad habit of appointing judges who claim to be on the right but turn out to be sellouts more concerned about fitting in, as we saw recently with the SCOTUS decision against the Texas lawsuit over the presidential election.

Meanwhile, felons all over the country who have been convicted of murder and rape (with long rap sheets) are being released to home confinement due to COVID-19. The MSM will not report on the other side of these types of cases. The Flynn case is a breakthrough. The pushback is finally starting against this corrupt tactic. Trump has another opportunity to bring justice here.