Rachel Alexander
|
Posted: Mar 09, 2020 12:01 AM
Share   Tweet
The opinions expressed by columnists are their own and do not necessarily represent the views of Townhall.com. 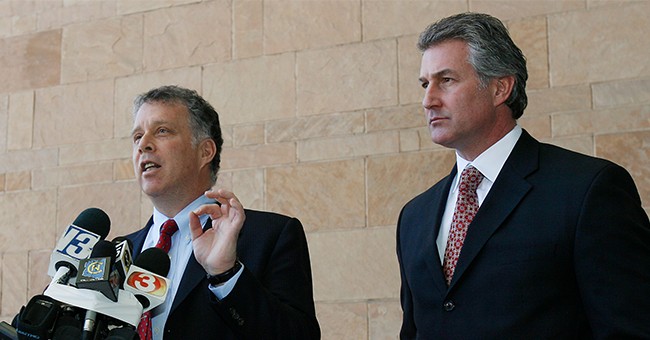 Over 14 years later, former Congressman Rick Renzi is still fighting for his innocence. He was wrongly imprisoned during the Obama administration by prosecutors and FBI agents who are part of the deep swamp. They got him convicted of attempting to conduct a land trade while in Congress that would have allegedly benefited him — but he didn’t even propose the trade and the judge ruled the land trade was in the “public interest.”

Renzi served a 3-year prison term and was released, but he is not giving up on clearing his name. A few months ago, his attorneys filed a 190-page complaint with the Inspector General of the Department of Justice, detailing the evidence of DOJ corruption in his case. Rudy Giuliani, who is a former federal prosecutor, was briefed on the complaint and told Renzi he was surprised the crooked FBI agent involved was still on active duty.

The main corruption Renzi is alleging involves an FBI agent named Dan Odom who advised the prosecution’s key witness Philip Aries “on numerous occasions” that he would receive a monetary award for testifying at trial against Renzi. Using the offer of money, the FBI agent manipulated Aries into changing his story and saying that Renzi had proposed the land trade — even though Aries later admitted once Renzi was in prison that he (Aries) had proposed the trade.

This offer of money was not disclosed by the prosecution to Renzi until after he was locked up. Not disclosing this constituted a Brady violation, which is where the prosecution fails to disclose favorable evidence to the defendant. The prosecutors also knowingly and deliberately sponsored false testimony to the jury, telling them that Aries had no financial stake in the outcome of the trial. But not only did Aries have the prospect of receiving big money, he was in financial trouble in 2007 and filed bankruptcy in 2010. He really needed the money, and said getting the money would be like “hitting the lottery.” Eventually, one of the prosecutors in Renzi’s case, who was involved in deceiving the jury, was promoted to disgraced former FBI Director James Comey’s staff.

The whole prosecution came about due to a South African citizen and former Resolution Copper Executive named Bruno Hegner. The company wanted the traditional Apache Oak Flats in Arizona to be part of the land trade, but Renzi stood in their way because the large number of Native Americans in his district opposed giving up their revered land. Hegner hired a former FBI agent to develop a fake dossier in order to take Renzi out, naming the scheme “Operation Eagle.”

Federal prosecutor Gary Restaino saw an opportunity to take down a powerful Republican. Restaino gives thousands of dollars in political contributions to Democrats like Hillary Clinton, Barack Obama and Janet Napolitano, and he enjoys writing liberal articles against English-only language initiatives and supporting other lefty issues. Renzi was in a swing district and was rumored to have plans to run against then-governor Napolitano, who Restaino’s wife worked for directly.

After Renzi was convicted, during an evidentiary hearing to consider the fact that exculpatory evidence was not disclosed, Odom admitted he had destroyed and withheld evidence deemed “important.” Odom was also promoted after his efforts in the trial.

More evidence of corruption continues to trickle in. Odom started his investigation of Renzi after the infamous Operation Lively Green. Odom’s reputation was tarnished after that scandal. He saw an opportunity in Renzi’s case to destroy Renzi and improve his reputation. In Operation Lively Green, the FBI targeted law enforcement and others in similar careers in order to ensnare the ones that agreed to traffic with a drug cartel. The sting went sour when some of the informants in the case raped an unconscious stripper during an FBI-sponsored orgy. The FBI tried to hide the 2002 sexual assault for more than a year from federal oversight.

Kelly Kramer of Mayer Brown, the 17th largest law firm in the U.S., is co-chair of the firm’s white-collar division in Washington, D.C. He has been practicing law for over 21 years and has never complained about the DOJ. Kramer said, “Renzi is innocent and the government cheated, before, during and after the trial.” The fact the firm and Kramer are taking on the DOJ speaks volumes. Another one of Renzi’s attorneys has been former DOJ attorney Sidney Powell, one of the nation’s best defense attorneys and author of the book exposing DOJ corruption, Licensed to Lie. She is currently representing Former Lt. General Michael Flynn. Powell called Renzi’s prosecution “horrible” and said, “the government hid evidence.”

Unfortunately, Renzi’s complaint is moving slowly. The IG sent the complaint to the Office of Professional Responsibility. That agency is known as the “graveyard,” where complaints are sent to be buried and swept under the rug. Renzi’s legal team was informed that DOJ officials in his case were subjected to some cursory investigation, especially after it was discovered that Renzi’s attorneys were wiretapped over 40 times. Yet nothing was done to discipline Restaino. Instead, he was promoted by Eric Holder to chief of the DOJ’s criminal division in Phoenix in order to help protect U.S. Attorney Dennis Burke of Fast and Furious distinction. Burke was forced to resign over that scandal.

The IG must honestly and fairly investigate this. Renzi has met with Sen. Lindsay Graham’s judiciary staff, and so far 15 members of Congress have signed a letter to the IG asking for an investigation into Restaino and Odom. It is factually documented who within the deep state committed prosecutorial misconduct and criminal acts in Renzi’s case. For an honest person, it will not be difficult to bring justice to this case.