Rachel Alexander
|
Posted: Feb 17, 2020 12:01 AM
Share   Tweet
The opinions expressed by columnists are their own and do not necessarily represent the views of Townhall.com. 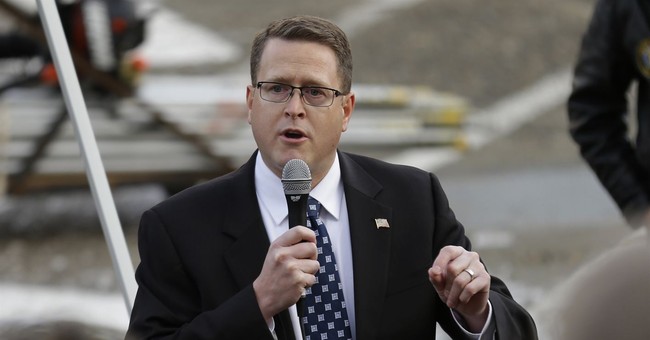 Washington state isn’t known for conservative politicians. But there is one state legislator who stands out amidst a sea of Democrats and moderate Republicans. Matt Shea represents the conservative side of the state, the Spokane area. Because of his views and activism, Democrats made him a target.

Democrats in the legislature spent $120,000 of taxpayers’ money to commission an investigation and report about Shea. They hired former FBI agent Kathy Leodler and her husband Paul Leodler. Mrs. Leodler has contributed money to Seattle Mayor Jenny Durkan, a far left Democrat. The report charged that Shea “planned, engaged in, and promoted a total of three armed conflicts of political violence against the United States government between 2014 and 2016.” It referenced the two standoffs involving the Bundy family over land rights in Nevada and Oregon.

They described Shea as a domestic terrorist. The media dutifully reported it. “Terrorist Matt Shea must be expelled from the Washington State House of Representatives,” ran the headline of a December 20 column in the Cascadia Advocate.

But if Shea is a domestic terrorist, why has he not been charged, arrested, and prosecuted by federal, state, or local authorities?

The report relies on Wikipedia, which has a left-wing slant and often gets facts wrong. It cites anonymous witnesses. The report contains no evidence that Shea “planned” or “led covert strategic pre-planning” in the Nevada and Oregon confrontations involving the Bundys. Shea and the Bundys both deny he did this. He went there merely to observe on a fact-finding mission.

Regardless, the case against Cliven Bundy and three others was dismissed with prejudice. The Hammonds were pardoned by President Trump. And the Malheur 7 from the Oregon standoff were unanimously acquitted of conspiracy and firearms charges. So if those orchestrating the protest were exonerated, why is Shea still being accused of being a domestic terrorist?

The report produces as more evidence a meeting Shea had with the leadership of Oath Keepers at a restaurant in Spokane. But nothing bad happened, they merely discussed land rights and some other issues.

The report cites a 2015 “Priest River Armed Conflict” in Idaho. But it wasn’t an armed conflict. Shea, the Bonner County Sheriff, and over 100 citizens demonstrated outside the home of a disabled Vietnam War veteran to protest a decision by the VA to disarm him. Some of the protesters legally carried firearms. It was a peaceful protest.

The report says Shea is associated with Marble Community Fellowship, a “Christian Identity ideology church” that holds “a racist, anti-Semitic, and white supremacist interpretation of Christianity.” This is not true. Two of the pastors are black, but the media won’t report that nor interview them. The pastors are rightfully upset at being called white supremacists.

The report says Shea trained young people to fight a "holy war” by creating a pamphlet called Biblical Basis for War. The report called it a “Biblical manifesto” to make it sound more ominous. It claimed that Shea “[a]dvocated replacing the U.S. democracy with a theocracy and killing all males who do not agree.” But the pamphlet merely analyzed the “just war theory,” which is studied at universities today. It goes over the moral basis for wars. It’s a study on what the Old Testament said about warfare, mainly from Deuteronomy 20. It analyzes the history of warfare. A soldier contacted Shea recently and asked him if he was justified in a situation where he had to put a gun to someone’s head.

Another accusation says Shea “condoned violence and intimidation during an online chat.” Shea happened to be in an online chat with others when someone made a comment about firearms, but Shea didn’t respond. The person who leaked the message string said he thought the guy who wrote the message was just venting, not calling for violence. Regardless, Shea has been very public about the right to keep and bear arms.

Another allegation said Shea “[e]ngaged in and promoted Patriot movement militia training and readiness exercises in preparation for armed conflict against the government and law enforcement.” This was nothing more than an annual paintball war with teens.

The report concludes, “Shea is likely to plan, direct, and engage in additional future conflicts that could carry with them significant risk of bloodshed and loss of life.” It went on, “Although this investigation found no evidence that Representative Shea presents an imminent direct threat to any individual or group...(nevertheless) Representative Shea has since 2014, presented a significant threat of political violence against employees of the Federal Government and state and local law enforcement officers, carried out through intermediaries.”

Democrats think if they call Shea enough scary sounding names, maybe one will stick. Besides a terrorist, he’s been called a racist, a homophobe, an Islamophobe, a white supremacist, an anti-Semite and a neo-Nazi.

Democrats in the legislature want to remove him from the legislature or at least censure him, but they don’t have the votes. They need a few Republicans on board in order to achieve the two-thirds required to expunge him. House Republicans, who have a reputation as moderates afraid of the left, suspended Shea from their caucus after the report’s release and removed him from his committee assignments. Members of both parties called on him to resign. Shea intends to run for reelection this year.

This report was a sham. Shea is nothing more than a regular Christian conservative. In a more conservative state, no one would blink an eye. But because he’s in a very liberal state he’s a target. The left has decided by labeling him a domestic terrorist they can destroy him. But unfortunately for them, they don’t have a shred of evidence and look ridiculous.