Rachel Alexander
|
Posted: Dec 24, 2018 12:01 AM
Share   Tweet
The opinions expressed by columnists are their own and do not necessarily represent the views of Townhall.com. 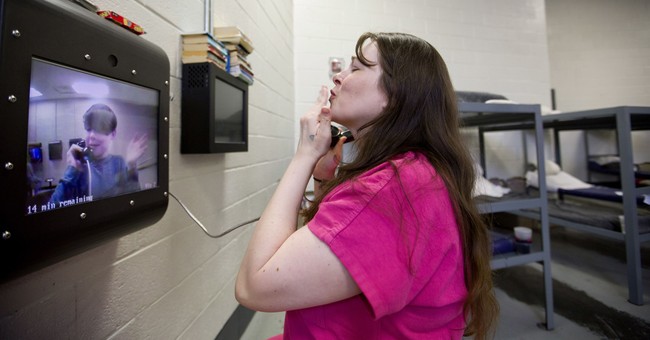 If Van Jones, Sen. Cory Booker (D-NJ) and Kim Kardashian all agree on a bill, it’s probably not a good idea. Republicans and Democrats came together to pass the FIRST STEP Act into law this month, which will allow felons early release. It’s being touted as a criminal justice system overhaul, to let nonviolent offenders out of prison for good behavior.

But as Senator Tom Cotton (R-Ark.), who graduated from Harvard Law School, observed, “there are almost no low-level, non-violent offenders in federal prison.” If they are in prison for low-level convictions, it’s because they were allowed to plea down to a lesser charge. If they are serving a long-term sentence for a drug-related crime, it is because they have a lengthy criminal history that includes violent crime. They are serving a mandatory minimum due to their criminal history.

The law will trigger the immediate release of an estimated 4,000 federal offenders out of the 180,000 currently incarcerated. This is twice as many prisoners as those whose sentences were selectively commuted by President Obama. That number will greatly increase over time. The Bureau of Prisons and Congressional Budget Office estimates roughly 53,000 prisoners could be released over the next 10 years. That is almost one third of the prisoners in federal prison!

This misguided bill would allow violent offenders out early for merely doing what they were already  doing in prison — engage in vaguely defined “productive activities.” This includes playing softball and watching movies, according to the Bureau of Prisons.

The bill excludes some violent crimes from eligibility for early release, but not all of them. Some of the dozens of dangerous offenses that are eligible include drug-related robberies involving assault with a dangerous weapon, using a deadly weapon to assault a law-enforcement officer, assault resulting in substantial bodily injury to a spouse or child and violent carjacking resulting in serious bodily injury.

The bill gives judges more discretion to ignore mandatory minimums for criminals with prior records. How does giving activist judges more power to ignore sentencing laws and lengthy criminal histories help anything? Instead they can pretend they’re merely sentencing a felon for drug crimes, keep that fake mantra going.

Kardashian has made it her mission to get felons released early from prison who are serving long sentences for drug related offenses. She convinced President Trump to grant clemency to Alice Marie Johnson, a woman serving a life sentence for a nonviolent drug conviction. The indictment described Johnson as a leader in a multi-million dollar cocaine ring. But what is the whole story? What was her criminal background before that, were there violent crimes? It is highly unlikely the reason she was sentenced to life in prison was due to the drug charges alone. But the media won’t report the full story and much of her criminal history is withheld from the public by law. Her incomplete story is now the poster child for this law.

How did this flawed bill get passed? It was misdescribed. Letting “low-level nonviolent offenders” shave a few years off of long sentences sounds reasonable. No one wants to go on record sounding like they oppose that. And it’s difficult to prove the bill is flawed, because so much of a felon’s criminal history is unavailable to the public. Only the prosecutors, criminal defense attorneys and law enforcement agents who deal with felons every day know the real story behind these types of felons (even the judges aren’t necessarily allowed access to their full criminal records). And they are overwhelmingly against the bill. Several of these national law enforcement agencies submitted letters to Congress warning that the bill will endanger public safety.

The legislation will not reduce future crime. It will not make our communities safer. Sen. Cotton says the way to remedy injustices in the system is to allow the president to choose who to pardon or provide clemency. Not allow thousands of felons out indiscriminately.

These types of things go in cycles. After violent crime inevitably starts sharply increasing, Congress will change the laws again to impose tougher penalties. But by then it will have been too late. How many innocent people will have to die first?