Piling on Racism Accusations to Take Down a Conservative State Legislator

Rachel Alexander
|
Posted: Dec 10, 2018 12:01 AM
Share   Tweet
The opinions expressed by columnists are their own and do not necessarily represent the views of Townhall.com. 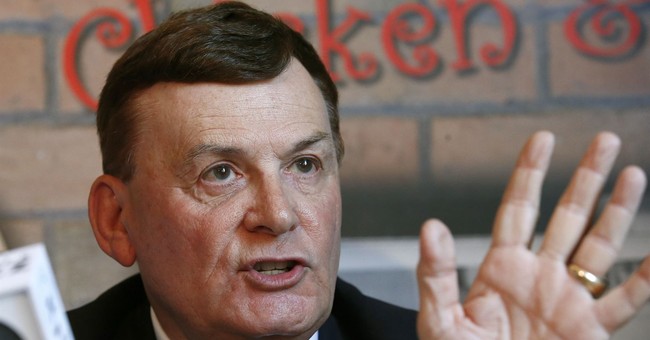 The left has a bad habit of labeling conservatives racist merely for being politically incorrect. Whereas when someone on the left actually is racist, they get a free pass. Hillary Clinton recently joked about how a woman interviewing her confused the two black men Eric Holder and Cory Booker. “Yeah, I know they all look alike," Clinton laughed. Most of the left-leaning media didn’t even bother covering the incident.

Contrast this to what is happening with conservative Arizona State Rep. David Stringer (R-Prescott). Stringer is a culture warrior, who is concerned about illegal immigrants and radical Islamists entering the country and changing the culture. This is a fairly common view, popularized by conservative author and commentator Pat Buchanan.

Once the left realized Stringer had an awkward way of discussing cultural issues, they laid a trap for him. Some Arizona State University students followed Stringer into an elevator with a hidden microphone and asked him gotcha questions. Prescott eNews (disclaimer: Stringer is an investor with the news outlet’s parent company) posted the full transcript of the conversation, since other news outlets writing about the incident unfairly cherry picked what to print.

The conversation continued like that a little longer. The students finally cajoled him into saying that blacks and certain other racial groups don’t blend in to the U.S. after a couple of generations because they “look different.”

Insensitive? Sure. But racist? Doubtful. Stringer is from Prescott, which has very few minorities. If Stringer was around minorities all the time, he probably would notice skin color a lot less. Regardless, noticing skin color is not racist. It’s treating people differently on account of their skin color that is racist. And that’s what the Democrats do, not Republicans.

During the rest of the secretly taped interview, Stringer made it quite clear he is not racist and treats everyone equally. But news accounts selectively quoted him and took his comments out of context to portray him as offensively as possible.

Smelling blood, his enemies started digging and discovered an article Stringer had written for Prescott eNews last year entitled “The Third Rail.” He discusses what President Trump calls the “third rail” in politics, immigration and border security. He talks about how the demographics of the U.S. are changing as the country becomes more multicultural. He discusses racial strife and divisions. The Phoenix New Times refers to it as a “white nationalist column.” Maybe it was “insensitive” to note that the white population is shrinking and the culture is changing. But to go so far as to call it racist?

The mainstream news articles didn’t bother to tell the story of how Stringer, an attorney, helped a black woman in Prescott with a hate crime — pro bono. She came to him asking for help since a neighbor was harassing her. At first he told her to try and find another attorney, since he wasn’t very qualified in this area of the law. When she was unable to find anyone, he took on her case. He was able to determine that this neighbor had a previous pattern of harassing minority neighbors and obtained a restraining order for her. She was so grateful, she took out a life insurance policy (she was dying of cancer) and named him as the recipient. Does that sound like a racist?

Don’t expect the Phoenix New Times to report this, because it goes against their untrue stereotype of an old, white racist Republican public official. Instead, due to the Phoenix New Times article, Stringer was removed from two House committees he served on. Sadly, even his own party turned against him. Several elected officials, including, but not limited to, Governor Doug Ducey, State Senate President-Elect Karen Fann, Arizona State Republican Chairman Jonathan Lines, as well as governing boards, including the City of Prescott Council, denounced Stringer’s words and/or called for his resignation. The NAACP called for his resignation or expulsion.

Stringer refuses to resign. House Speaker-elect Rusty Bowers (R) said he will not expel him, saying it would be unconstitutional. Due to the nature of a recall election, it will be very difficult to recall Stringer. So expect the efforts to smear him to continue, in order to try and force him to resign. His House seatmate, Noel Campbell, is standing by Stringer. He said, “...Rep. Stringer retains his constitutional right to express his opinions on immigration, taxes and education.”

Even if you don’t agree with Stringer’s statements, everyone should be concerned about where this is going. If not stopped, pretty soon anyone who comments on racial differences will be labeled a racist. There is a herd mentality that is terrified of being labeled racist, so they pile on others as much as possible in order to appear self-righteous. What used to be merely considered politically incorrect is now becoming career-ending racism, homophobia, xenophobia, etc. And it’s even more troubling that our own side is leading the charges.