Mexican Journalist Reveals the Truth About the Caravan

Rachel Alexander
|
Posted: Nov 19, 2018 12:01 AM
Share   Tweet
The opinions expressed by columnists are their own and do not necessarily represent the views of Townhall.com. 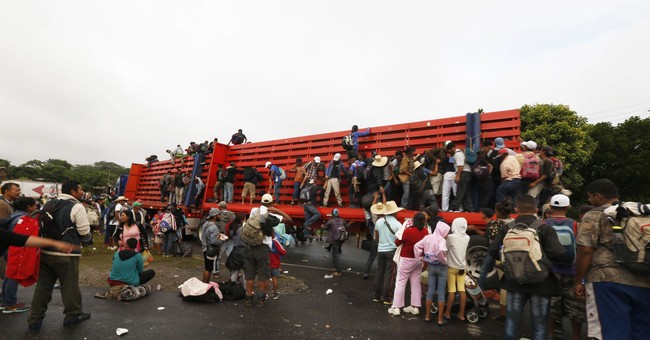 Mexican journalist Alex Backman has released a stunning expose on the caravan from Central America. He says the migrants are robbing and stealing in Mexico. They carjack cars containing just one occupant. There are even accounts of rapes. Many of the migrants will not let people film them. If they see someone filming them through a car window, they stop the car and demand the phone. Backman suspects the reason they don’t want to be filmed is because they have criminal histories.

Honduran President Juan Orlando Hernández told Vice President Mike Pence that “the caravan was organized by leftist organizations.” Left-wing organizations are providing assistance. They include the coalition CARA Family Detention Pro Bono Project, which stands for the Catholic Legal Immigration Network, the American Immigration Council, the Refugee and Immigration Center for Education and Legal Services and the American Immigration Lawyers Association. At least three of the groups are funded by George Soros’ Open Society Foundation.

Of course, exposing this is risky, because the left is fond of denying that Soros funds its ventures, labeling anyone who points out the connection as a conspiracy theorist. Kelly Johnston, a vice president at Campbell Soup, was fired after he tweeted about Soros funding the caravan.

Backman says the rocks being thrown by caravan members are not just little rocks, but large ones that can kill people. Mexican law enforcement vehicles have iron mesh over all of their windows due to the rock throwing. Unfortunately, law enforcement is armed with guns that are little more than paint guns.

The rock throwing escalated in recent days as the caravan reached Tijuana. The migrants are clashing with the locals, who are marching in the streets demanding that they leave public spaces and report to shelters. The locals yell “Go home. We don’t want you here!” Tijuana Mayor Juan Manuel Gastelum referred to the arrivals as “bums.” “Human rights should be reserved for righteous humans,” he said. At least three journalists were injured in fistfights and other violence. Some of the migrants refuse to stay in the shelters, comparing them to jails. According to The New York Times, the caravan “is already threatening a potential crisis for Tijuana and the surrounding state of Baja California.”

Instead of trying to illegally cross the border into California, the caravan members are waiting at the border to apply for asylum. But they don’t qualify for asylum under international law, Backman observes. There’s no war going on in Honduras. At least 1,400 have applied for asylum in the U.S. It will be weeks before their turn to present their case comes. Meanwhile, they are remaining in Tijuana near the border, where locals and churches are providing them with food and clothes.

The U.S. Border Patrol is out in force along the Tijuana-California border. American workers rushed to complete the border wall there. President Trump is sending the military to the border merely as assistance to the National Guard — he’s not militarizing the border. But the Mexican media is warning that Trump is going to use force on the border. They are also falsely attempting to portray the caravan as primarily women and children.

President Trump tweeted about the caravan, “Isn’t it ironic that large caravans of people are marching to our border wanting U.S.A. asylum because they are fearful of being in their country – yet they are proudly waving their country’s flag,” he wrote. “Can this be possible? Yes, because it is all a BIG CON, and the American taxpayer is paying for it.” Trump refers to the caravan as “an invasion.”

It is no way near over. A man within the Mexican government told Backman there are more caravans coming from three other countries; Brazil, Columbia and Venezuela. Officials in Baja California say there are currently 9,000 migrants moving through Mexico in caravans.