Rachel Alexander
|
Posted: Mar 26, 2018 12:01 AM
Share   Tweet
The opinions expressed by columnists are their own and do not necessarily represent the views of Townhall.com. 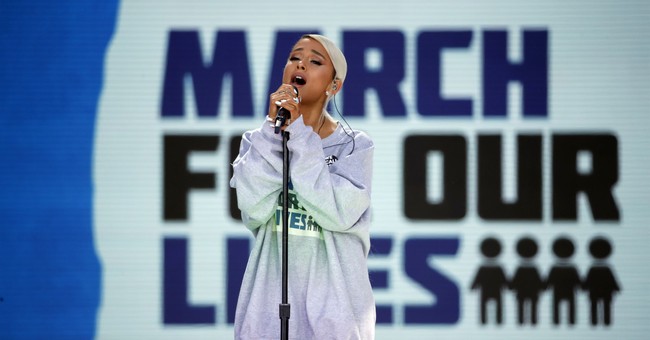 Students from Marjory Stoneman Douglas High School in Florida, the scene of a recent mass shooting, organized a march in Washington, D.C. and other cities on Saturday to protest the NRA. But instead of honestly calling it a gun control march, they called it “March For Our Lives.” By using a misleading title, they were likely able to coerce a lot more people to show up. Even so, the D.C. march appeared to be less than half the size of last year’s Women’s March.

Students as young as 11 spoke at the event, defensively claiming they were old enough to understand. Naomi Wadler, an 11-year-old student, told the crowd, “People have said that I am too young to have these thoughts on my own,” she said. “People have said that I am a tool of some nameless adult. It’s not true. My friends and I might still be 11, and we might still be in elementary school, but we know.”

Zoe Tate, 11, exclaimed, "I think guns are dumb. It's scary enough with the security guards we have in school," she said. "We don't need teachers carrying guns now. I find it amazing that I have to explain that idea to adults."

However, Campus Reform asked youth at the rally if they could explain what assault weapons are. Their answers included “Um, like, no I guess. Um, but, ‘assault weapons’ — does that sound safe to you at all?”

One Parkland student, Emma Gonzalez, held the stage silent after she got done speaking until it had been over six minutes, to represent the amount of time it took the gunman to shoot students at her school. However, Colion Noir, a host on NRATV, observed, “These kids ought to be marching against their own hypocritical belief structures. The only reason we’ve ever heard of them is because the guns didn’t come soon enough.” It shouldn’t have taken over six minutes for the good guys to to arrive with guns to stop the killer. If teachers had been armed, they could have stopped him far sooner.

David Hogg, a student at Marjory Stoneman who ardently supports gun control, has been the most vocal face of the school since the shooting. He gave an interview with The Outline that was so profanity laden many news outlets could not reprint it. In it, he ridiculed people his parents’ age for being too stupid to fix gun violence. At the rally, he ended his speech with his fist straight out diagonally in the air. Many compared it to a Nazi salute and the Hitler youth who supported gun control.

Students from Parkland who oppose gun control were excluded from participating. Second Amendment supporter Hunter Pollack, whose sister Meadow was killed in the shooting, wanted to speak but organizers would not let him. Celebrities included Kim Kardashian, whose presence didn’t do much to influence people. She drew a lot of attention for badly photoshopping a photo of herself to look thinner that completely squashed a car in the background.

The rally was essentially a demand to erode the Second Amendment. It should have been called “March Against Our Rights.” The marchers claim they don’t trust the government, yet they want the government to take their guns away. They say they’re calling for common sense legislation, but clearly they don’t understand what assault weapons are. Over 80 percent of mass shootings are carried out with handguns – not assault weapons. In 2016, 7,105 people were killed by handguns. Only 374 were killed with rifles.

The reality is, the NRA is all about promoting gun safety. It stands for the exact opposite of using guns for violence. The NRA is about protecting innocent people from bad people using guns to hurt them. Taking guns away from innocent people trying to protect themselves will just create more victims. Gun control advocates know once they can get approval to ban assault weapons, it will become a lot easier to ban handguns next.