Why Isn’t the DC Police Chief in Jail For Not Issuing Gun Permits? 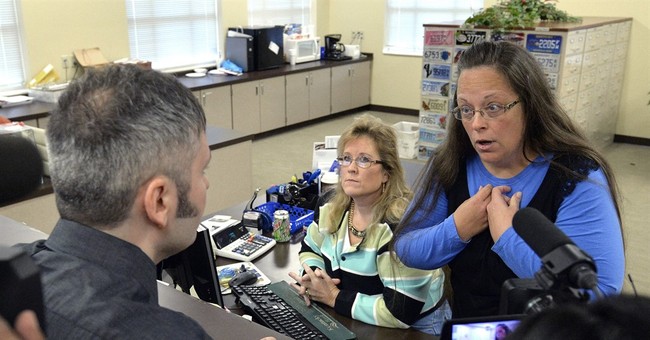 Kim Davis, the Democrat Kentucky county clerk who refused to issue same-sex marriage licenses because of religious objections, was ordered to jail for contempt of court last Thursday. She suggested a compromise of removing her name from the licenses, but Federal District Court Judge David Bunning wouldn’t even grant that reasonable compromise.

Contrast this with Cathy Lanier, chief of the Metropolitan Police Department of the District of Columbia, refusing to issue concealed weapons permits to people unless they can arbitrarily show a “good reason,” nothing required by law. A federal judge issued a preliminary injunction in May stopping her from denying the permits, although notably he did not send Lanier to jail for contempt.

Similarly, county sheriffs in California had been denying concealed weapons permits to applicants who failed to show a need beyond self-defense. Last November, the Ninth Circuit ruled that the sheriffs were violating the law. None of those sheriffs were sent to jail, despite the fact that people around the country have died unable to obtain a permit to carry concealed.

Or contrast it with the irony of San Francisco Mayor Gavin Newsom ordering clerks to issue same-sex marriage licenses in 2004, contrary to state law. The California Attorney General sued him and the California Supreme Court ultimately put an end to the practice, but Newsom was never sent to jail.

Newsom also violated federal law by making San Francisco a sanctuary city in 2007, contrary to existing federal law, but nothing happened to him. The city’s sanctuary status resulted in the death of Kate Steinle in July, who was shot by an illegal immigrant who had been deported five times and had seven felony convictions. This is a far more drastic result than a clerk who merely does not want her name on marriage licenses, yet nothing is being done to the current mayor of San Francisco, Ed Lee.

In 2012, a lesbian judge in Texas said she would not issue marriage licenses to heterosexual couples until same-sex marriage was legalized. She wasn’t put in jail for violating the law, nor does it appear she was even disciplined at all.

Not everyone would have taken the position Davis did, some Christians might have resigned rather than deal with a huge battle. Others might not have had such strong objections, viewing matters of sexuality best left alone and without government interference. When I was an Assistant Attorney General for the State of Arizona, I represented agencies like the Arizona Commission on the Arts. Philosophically, I disagreed with its very existence. But I was able to separate my personal views from government laws to perform my job.

The one thing all reasonable people can agree upon is that Davis was singled out and punished disproportionately compared to other public officials who didn’t comply with controversial laws.

This isn’t about same-sex marriage, nor is it even about gay issues. It is merely one tactic in a larger goal to remove Christianity from the public sphere. There are reasonable compromises that could have been made between those Christians with conscientious objections and the LGBT community — plenty of gays consider themselves Christians — but the left is deliberately pushing for maximum conflict between the two groups in order to push one out of society. With the judiciary comfortably controlled by the left — Judge Bunning once joined a decision overturning a ban on partial-birth abortion — the left is forcing these conflicts through by abusing our legal system. Dan Calabrese has an article on the Herman Cain website titled “Gay marriage end game: No Christians serving in any public office, ever.”

An Oregon judge announced on Friday that he will not perform same-sex marriages. Unlike the lesbian judge who said she would not perform heterosexual marriages, Judge Vance Day was immediately put under an ethics investigation by the Oregon Commission of Judicial Fitness and Disability, which plans to hold a hearing in November.

This won’t end with public employment. As the public sphere goes, so goes the private sphere. If companies balk, anti-discrimination laws can be used to force them to comply. The left intends to stamp religion out of society, until Christians are left secretly worshiping in their homes, hiding their status outside of the home. This is because the left fundamentally disagrees with Judeo-Christian ethics, which contradict its foundation of anything goes.

Until conservatives wake up and start realizing the judicial branch, controlled by the left, has become the most lethal branch, the biggest threat of the three branches to our country and freedom, it will continue abusing the legal system to stamp out conservatism and religion from society.