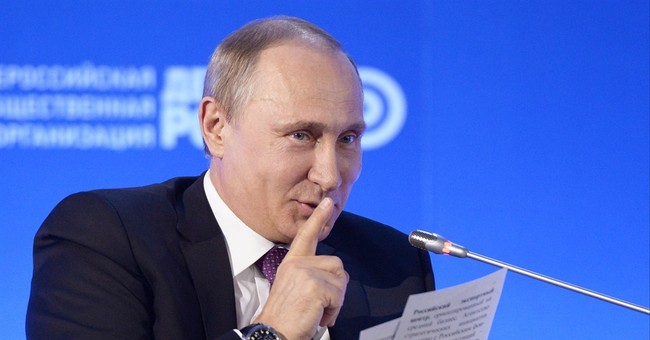 Bewildered in recent years by all the vitriolic hatred directed toward the U.S. from foreigners? Turns out it’s not all real. The propaganda machine of the Kremlin during Russia’s communist era, known as Pravda, has reinvented itself and is making a resurgence, this time through “Kremlin Trolls” who litter onine news sites and social media with Vladimir Putin’s agenda. Yesterday, in a huge expose, The New York Times labeled it “the biggest trolling operation in history … a highly coordinated disinformation campaign, involving dozens of fake accounts that posted hundreds of tweets for hours, targeting a list of figures precisely chosen to generate maximum attention.”

Going by the innocuous sounding “Internet Research Agency,” the “Troll Factory” is located in an austere, probably Soviet-era gray cement building in St. Petersburg, a creepy throwback to the communist era. The shades on the windows are never opened. A video showing employees entering the building and sitting next to each other in the “Troll Den” was leaked and posted to YouTube.

Staffed by mostly young adults eager to make higher than average wages, the trolls work in 12-hour shifts, with quotas of 135 posts or so per shift. There are an estimated 400 employees. One department is completely devoted to posting on LiveJournal, which is popular in Russia; another one is dedicated to creating images and “demotivators,” images that denigrate their subject matter. One department deals entirely with Ukrainian propaganda, other departments target The New York Times, the BBC and CNN. Even the conservative site The Blaze has been targeted in its comments section. Popular social media sites trolled include Instagram, Twitter and VKontakte, which is Russia’s version of Facebook.

Trolls receive strict instructions on using keywords and responding back and forth to each other in comments. A “Villain Troll” plays devil’s advocate, and a “Picture Troll” responds with photos to discredit the Villain Troll.

Employees who are multilingual are paid more, provided they can demonstrate the correct political opinions. Employees are periodically given tests to ensure they are knowledgeable, such as “Who’s Psaki?” Jen Psaki is the U.S. State Department spokesperson, a frequent target of the trolls.

Employees log on to an Internet proxy service to mask their IP addresses. Many of the fake profiles use attractive photos of models and claim to be Americans located in large U.S. cities. They have innocuous-sounding names like koka-kola23, green_margo and Funornotfun.

The goal is to create normal sounding, credible online personalities, who then strategically insert propaganda - often sandwiched between generic, vanilla posts. According to The New York Times, “The point was to weave propaganda seamlessly into what appeared to be the nonpolitical musings of an everyday person.”

The trolls have gone so far as to create fake screenshots of news websites in order to bolster the fake stories they create. One of the primary goals of IRA is to make the U.S. look bad, so people will question whether the U.S. has any moral legitimacy criticizing Russia.

Former troll Marat Burkhard said employees are instructed to make Obama look like a monkey with no class. The funniest assignment he claims he ever received was to write 135 comments making fun of Obama chewing gum and spitting it out in India.

One of IRA’s biggest hoaxes last year was pretending there was a hazardous accident at Columbia Chemical in Louisiana. Another hoax claimed there was an Ebola outbreak in Atlanta. The same day, yet another hoax appeared about a black woman had supposedly been shot by police in Atlanta, using the hashtag #shockingmurderinatlanta. The purpose of the fake stories was to make the U.S. look incompetent and chaotic.

In February, the trolls responded en masse to the murder of Russian opposition leader Boris Nemtsov, who was likely killed by the Kremlin. "Who is to gain from this assassination but America? It must have been CIA," was a common comment left.

Ukraine is another prime target of IRA. Satellite photos were digitally altered in one hoax to make it appear that Ukraine was responsible for shooting down Malaysian Airlines Flight MH17. To deal with Serbia, this message is put forth, “the Kiev regime is neo-Nazi and … Putin was right to annex Crimea.”

Burkhard said he had to hide his pro-Western views or he would have been fired. He worked in a department that left comments on local Russian municipal websites. He admitted to reporters that employees’ posts frequently didn’t make sense because they have so little knowledge of politics, “you don't even have to really read it, because it's all nonsense.”

As more and more employees quit IRA and speak out, there is hope that exposure may slow down its operations. Former employee Lyudmila Savchuk has filed a lawsuit against IRA over employment violations, hoping to expose its activity in the process. Savchuk worked at the factory for two and a half months before she became disgusted and quit. She told reporters she didn’t feel right posting awful things about opposition leaders she really knew nothing about. The trial starts later this month.

Most people think the factory is funded by Evgeny Prigozhin, a wealthy restaurateur with lucrative government contacts who is close to Putin. A New York Times reporter who tried to get to the bottom of the story was set up and framed as conspiring with a Neo-Nazi to create unrest in Russia.

Putin may be trying to return to running the country using old totalitarian methods, but the fact this immense amount of information has been released about IRA is evidence Pravda is no longer in control. Before, those who went public against the regime would have been afraid of being shot. Today, few of the former trolls seem afraid. The Troll Factory may end up backfiring against Putin, ultimately pushing him out of office as the country realizes what he has been doing. For once, this is an area where the American left and right can agree - the dishonest government propaganda machine is no good and must be exposed. And don’t forget to check out the comments after this article.

Rebecca Downs
Well, That’s Not the Retirement Message Some Employees Were Expecting from a Diversity Consultant Firm
Matt Vespa