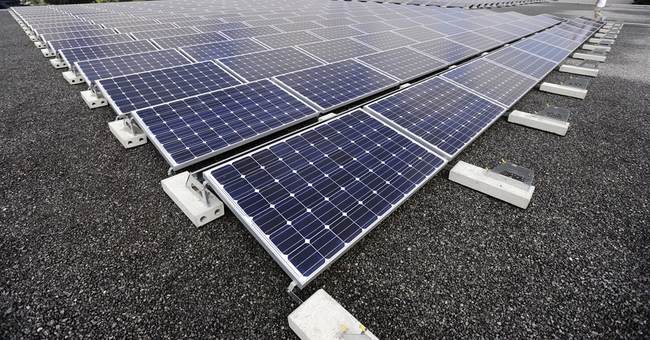 A heated battle is taking place in Arizona between the fledgling solar industry and APS, the state’s largest energy company, which enjoys a state-granted near-monopoly over energy. In sunny Arizona, it is peculiar that solar energy is being portrayed as the bad guy. Since Arizona is a Republican-dominated state, APS is sneakily buying up influential Republicans, both directly and indirectly, to perpetuate its crony capitalism. The Washington Post refers to these Republicans as “some of the best pollsters and consultants money can buy.”

The spin goes like this, “stop subsidizing the solar industry.” The word “subsidy” is used to scare Republicans. The solar companies are being compared to Solyndra, the green energy company that went bankrupt despite receiving more than $500 million in loans from the Department of Energy.

The reality is, the solar industry is not being “subsidized.” Energy users who do not use APS power, but use their solar panels instead for power, are simply not being double-charged. When they are not using APS power, but are instead sending unused solar power energy back to the grid for others to use, they receive a rebate. This is known as “net metering” and has been in place since 2009. APS wants to eliminate this, which will essentially have the effect of charging solar users for APS power they do not use. Instead of receiving 15 cents per kilowatt-hour rebates for power the solar users send back to the grid, APS wants to reduce the rebate to 4 to 10 cents. This would add $50 to $100 a month to the power bills of solar users. The utility also wants to start charging solar users a monthly maintenance fee.

Solar users are saving everyone additional costs. As energy users dependent upon APS decrease their usage and move to solar power, fewer generating stations need to be built, and fewer distribution lines put into place. While it is true that solar users are paying less towards the maintenance costs of APS, it is because they are using less of APS’ services.

What has complicated the issue and made it easy for crony capitalist arguments to prevail is that energy is not a purely free market commodity. Due to the limited nature of energy, and the expense of outfitting each home with energy sources, it is virtually impossible for competing energy sources to exist without government - or some type of neutral entity - stepping in to split up the pot in some way. If APS has its way, it will continue to be propped up as a near-monopoly by the government, subsidized by taxpayers. Allowing solar companies to compete merely reduces the gargantuan market share that is artificially allocated to APS. I lived alone in a small home in Arizona for most of the last 12 years, and thought it was outrageous that my bill from APS was frequently close to $300 per month, no matter how frugally I used electricity and air conditioning.

This feud has come to a head this year because APS is discovering its profits are decreasing as more and more people in Arizona move to solar power. This is happening in part because the cost of installing solar panels has decreased drastically in recent years. About 200 APS customerseach month are adding solar to their houses now.

APS has been secretly contributing large amounts of money to conservative organizations like 60 Plus Association, the conservative alternative to the AARP, and the conservative organization Prosper, in order to influence the groups to run negative ads against solar power. When a reporter asked APS spokesman Jim McDonald in July whether APS was funding the 60 Plus costly TV ads, he denied it, saying, “No, we are not.” Instead, APS claimed it was a coincidence that the two organizations were aligned with it. McDonald has a history of advocating for tax increases.

In October, it was discovered that APS had been lying all along about funding conservative organizations to run attack ads. These groups bashed the solar net-metering policy as “corporate welfare.” It is ironic, because corporate welfare is actually what APS is demanding for itself.

Perhaps the term “net metering” needs to be changed to something more accurate, so consumers aren’t as easily fooled into believing it is a subsidy to solar companies. Call it what it is, non-double charging or rebates for contributing power.

Some conservatives have been fooled, lining up behind crony capitalism. Others see through the false rhetoric. Barry Goldwater, Jr., has come out against APS’ near monopoly. A Green Tea Party Coalition has been formed in Georgia by Debbie Dooley, national coordinator for the Tea Party Patriots and co-founder of the Atlanta Tea Party.

Conservatives who can see through the crony capitalism are forming a strange alliance with the left. It is one of very few issues that liberals and conservatives can both agree on, although for different reasons. Obama’s Organizing for America organization is taking sides with the solar companies in the name of “climate change.”

The Arizona Corporation Commission (ACC) will be starting hearings on November 13 regarding net metering. The ACC has rejected APS’ proposals so far. If the ACC does not resolve the matter this month, debate could continue for two more years until APS’ next rate hearing. Commissioner Bob Burns has asked for an investigation into APS funding of 60 Plus, demanding information on any secret funding of nonprofits or public relations campaigns. It would be brutally unfair if APS customers’ money is being used to kill off the solar industry, and is likely a violation of the utility’s last rate case settlement.

Forty-three states and the District of Columbia use net metering. Arizona State University’s business school has determined that Arizona is the most promising state in the country for solar production. Jason Rose, a veteran Republican consultant working for the solar industry, told The Washington Post, “If the utilities are able to upend rooftop solar in Arizona, the sunniest state, then imagine what they can do everywhere else.”

This is a case of follow the money. When there is big money involved, which a utility company with a state-sanctioned near-monopoly is lying about, and conservatives are backing crony capitalism, you can be assured theirs is not the conservative position.