Why the Democrats are Winning 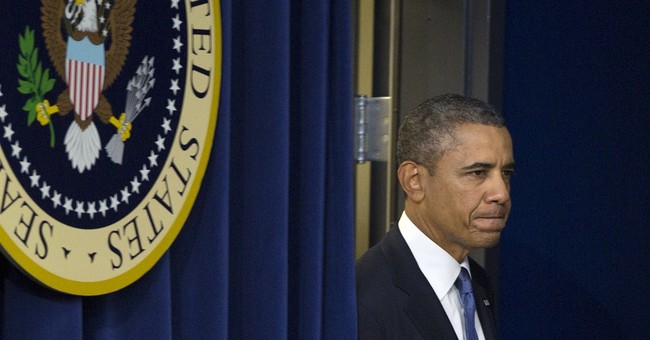 Americans appear to have begun entering a more conservative phase, reflected in part by the popularity of the family-oriented, God-loving TV show Duck Dynasty. Although it is not a big expensive production, just a reality show, it has become the second most popular show on cable TV.

Yet this isn't translating into changes in Americans' politics or their government. Americans are still voting for Democrats, accepting socially liberal positions and expanding government. The reason is simple. Liberalism self-perpetuates itself if left unchecked because people are lazy. This is due to the nature of government. It is difficult to feel the effects of incrementally raising taxes and increasing spending across the board.

The average American now owes $52,878.60 in federal debt. If each American was forced to pay their share of the debt now, you can guarantee the vast majority would start voting for Republicans.

Government withholdings from paychecks also contributes to this insulating effect. If the government didn't mandatorily withhold taxes from each paycheck, many Americans would not have enough money at the end of the year to pay all of the income taxes they owe. The average American making $50,000 annually loses about $10,000 of that just to federal income taxes. Can you imagine the chaos if Americans were suddenly individually responsible to come up with $10,000 every year?

This masking of the harsh realities makes it easy to accept just one more tax increase for a “good cause.” Who notices a 1 cent increase in the sales tax? The correlation is direct – it is easy to feel compassionate and helpful when you can watch seemingly painless money going to a righteous cause. The cause doesn't even have to be righteous, just mask it as going to schools and law enforcement by providing a tiny amount to those entities and naming the bill after them.

Contrast this with the indirect harm tax and spending increases cause. That small tax increase will hurt businesses. Some will either shut down, laying off employees, or compensate in other ways, such as by dropping health insurance for employees. Yet the harm is so indirect, not specifically identifiable when legislation is proposed, that it is less persuasive.

Even more difficult to impress upon people is the inevitable economic collapse that tax and spending increases will bring about. Eventually the U.S. is going to run out of friendly countries extending it credit to support its spending problem. This will occur when the U.S. can no longer afford to pay the minimum payments owed on its debt. The reverberating effect this will have across the U.S. economy will be massive and devastating, as irritated creditor countries hike up the cost of their products or quit selling many of them to the U.S. The U.S. owes $1.16 trillion to China ($15,000 per American family). Americans buy a lot of goods from China, particularly the lower classes who rely upon cheap items from Wal-Mart and discount clothing on the Internet. The loss of those cheap prices will put families in turmoil.

Another reason Democrat policies win if people aren't paying attention is because Americans and politicians have this urge to “do something” in Congress. If politicians don't get legislation passed, they're criticized and Congress is derisively referred to as a “do-nothing Congress.” While it's true that politicians are elected to office in order to “make the country better,” at this stage of creeping socialism, it's better not to pass any legislation if it's going to be bad legislation.

It is difficult for Republicans to get legislation passed implementing cuts because the correlation to allegedly “hurting people” is direct. Cut food stamps? The Democrats cry that millions of poor single moms and their children will be impacted. In contrast, the benefit of cutting costs is usually portrayed indirectly, so it carries less weight. There are thousands of places in the budget where the cost savings could go, and much of the time bills to cut spending don't designate them clearly. Making things worse, the public isn't sympathetic to directing cost savings at the military or paying down the debt - Republican ideals. These principles are too far removed from their everyday lives and have no emotional message to resonate. Vaguely warning that “our children will suffer down the road” is not a real emotional argument that tears at your heartstrings. It is not effective.

Perhaps the only way Republicans can turn this around is to start showcasing the people who are being hurt by the spending and tax increases. Too many people operate based on emotion, and it’s not going to change, so Republicans may as well embrace emotional tactics. Discredit the left's argument that their policies only soak the rich. In reality, the rich are mostly insulated by their wealth from feeling the pain of Democrats’ policies. The right should showcase a lower middle class family that cannot afford to buy school supplies for their kids, a single mom who cannot afford air conditioning or heating, or a dad who must take multiple buses to get his family anywhere because he cannot afford to repair his car.

For too long, the left has held up the poor as an emotional lure to get knee-jerk support for their policies. It has worked, and now the poor have everything available to them, while the middle class is going without. The poor receive food stamps and can buy steak, fast food, and expensive food that the lower middle class cannot afford. The poor qualify for Medicaid to cover their healthcare, while the middle class is stuck with unaffordable Obamacare. The poor can live in Section 8 free or reduced income housing. The lower middle class has no such assistance and instead has been hit with foreclosures.

The sad result of this reversal is that it disincentivizes the lower middle class from working. If your neighbor is on Facebook all day living the good life on welfare instead of working, and you’re struggling to get by at a miserable job as you’re forced to rack up credit card debt, it’s rather easy to make the transition to welfare. Food stamps now look like a debit card so no one sees you using them.

The left is also winning the culture war. While Americans deep down prefer shows like Duck Dynasty, they’re allowing the left to win on social issues. The left has accomplished this by portraying Republicans as cold and heartless, using emotional arguments to sway the public. Republicans can turn this around by doing the exact same thing back to the left. Portray the woman who wants to abort her baby as cruel and selfish, and showcase those children who grew up with permanent injuries as a result of an attempted, botched abortion. These kinds of portrayals must be done frequently and everywhere. It must become common knowledge that the left has cruel and selfish policies that injure people, in order to turn the tide.

Conservatism is too cerebral for many Americans. Consequently, the right has to try twice as hard as the left to gain support for its policies. This means working smarter too, by using methods that are effective like emotional arguments. Although it may feel foreign to most on the right to use an emotional argument about something that is not terribly worthy of emotion, to continue down the same old path that no longer works is slowly making the Republican Party a minority. Republicans need to quit lamenting over the backwards fact that the most intelligent party is not the most successful.