Biden: The Other Half of the Moveon.org Dream Team 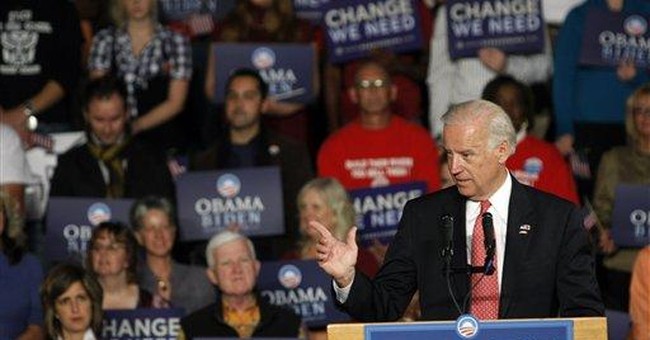 When Barack Obama picked Joe Biden to be his Vice-Presidential running mate, he demonstrated that he was not in favor of “change,” but would continue the Democrats’ conventional policies. Biden, a member of the U.S. Senate since 1973, has become more liberal over the years and now represents the liberal wing of the Democrat Party.

The reality is, the only “change” Obama is bringing is that he is African-American, and at age 47 is significantly younger than most U.S. Presidents have been (JFK was elected to President at age 43). Those two distinguishing characteristics are a lot less determinative of what his administration will be like than his record and viewpoints on issues – which are both far to the left.

If Barack Obama looked like Ted Kennedy in physical appearance (their political views are almost exactly the same), he would not be doing this well in the race for president. It’s wonderful that society has moved beyond racism, but now it’s gone too far to the other extreme, promoting race to the exclusion of everything else.

Voters aren’t interested in “change” because the Republicans haven’t done a good job – we’re the wealthiest country in the world with the highest living standards. The primary reason voters are interested in “change” is superficial and shortsighted; it’s due to natural presidential party fatigue and the Federal Reserve’s meddling in interest rates. Manipulation of interest rates inevitably leads to recessions which lead to voter disillusionment with the party in power. Combine that with Bush’s acquiescence to the Democrats on spending during a time when our federal debt is spiraling, and voters are easily fooled into thinking that Democrats are the cure. In reality, the Fed’s manipulation of interest rates has little to do with the party in control of the presidency, and a Democrat administration will increase spending and taxes faster than any Republican administration would.

So what does Biden bring to an already far left presidential ticket? There are two things that stand out about Biden: his history of plagiarism, which forced him to drop out of a 1988 bid for president, and his liberal voting record.

In law school, he was accused of plagiarizing five pages of a 15 page law review article, receiving an F in the course. When he ran for president in 1988, he was caught plagiarizing several lines from a speech by Neil Kinnock, leader of the British Labor Party at the time. Biden also has a problem with the truth. He has said he graduated in the top half of his law school class, when he really graduated 76th out of 85. He said he received a full scholarship to law school when in reality it was only a partial scholarship. Much of this came to light during his presidential bid, and he withdrew, saying his candidacy had been overrun by “the exaggerated shadow” of his past mistakes. He ran for president again last year in the Democrat primary; apparently his misgivings about running due to his problem with the truth don’t matter anymore.

The perception that Biden is a moderate Democrat is no longer accurate. Last year, Biden received a 0 rating from the American Conservative Union. The year before, he received a 4. His lifetime rating has been going down, and now stands at a 13.04. Even Obama has a better record, scoring 7 last year and 8 the year before, his only years in the Senate. The AFL-CIO gave Biden a 100% rating. The ACLU ranked him 91% last session; one point lower than John Kerry, six points higher than Ted Kennedy, 11 points higher than Obama, and 16 points higher than Hillary Clinton.

Biden’s accomplishments in the Senate including bragging in 2007 that he he’d brought home $67 million worth of pork for his constituents through Congressional earmarks. One of his biggest pork projects has been funneling extra money to Amtrak. It’s a selfish interest that benefits himself; Biden rides Amtrak to work in Washington, D.C. He hosts a dinner for Amtrak employees every year.

Biden has served on the Judiciary Committee for much of his Senate career. He chaired the judicial confirmation hearings of conservative judicial nominee Robert Bork, ensuring that Bork was not confirmed, even though he’d indicated a year prior that he would approve Bork. Biden is responsible for authoring the 1994 Violence in Women Act (VAWA), which provided billions of dollars to combat gender-crimes and domestic violence. It has been sharply criticized by conservatives as a federal encroachment into an area that should be left up to the states’ jurisdiction.

Biden’s foreign policy record is dismal. One of his main accomplishments in this area was persuading former President Bill Clinton to use force against the Serbs. Conservatives were hesitant to bomb Kosovo because there were atrocities being committed on all sides, not just by the Serbs. The Republican Policy Committee of the Senate issued a statement expressing concern that Clinton was forming an alliance with the Kosovo Liberation Army, a group of radical Albanians classified as a terrorist organization by the U.S. State Department.

Biden voted against authorization for the Gulf War in 1991. Currently, he believes Iraq should be divided into three separate ethnic enclaves. This has been rejected by Iraq’s political leadership which unified to denounce the plan. Biden is no friend to Israel. In May 2008, he said it was “bullsh**” for President Bush to give a speech in Israel saying that Democrats were acting similarly to appeasing Hitler before WWII. He later apologized.

Biden is a big supporter of “campaign finance reform,” which hurts candidates who are able to raise significant amounts of money on their own. He supports it because having made the Senate his lifelong career, he’s never become a millionaire like half the other members in the Senate. Public campaign financing permits career politicians like himself to run for free for office on the taxpayers’ dime.

Biden’s record on social issues is abysmal. Due to his far left pro-abortion record, Biden has been barred from receiving communion by the bishop in his hometown of Scranton, Pennyslvania.

Last year, while running for the Democratic presidential nomination himself, Biden said Obama was not qualified to be president. "I think he can be ready, but right now I don't believe he is. The presidency is not something that lends itself to on-the-job training." Now that Biden has agreed to be Obama’s running mate, one wonders whether Biden says these things because he’s not very smart, or if he’s capitulated because he wants the fame and status. Either reason speaks poorly of Biden, and ultimately he brings just more of the same predictable far left views to the presidential ticket.