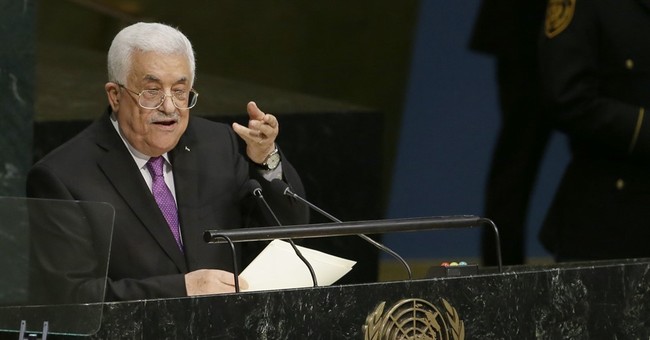 Editor's Note: This column was co-authored by Rabbi Yitzchok Adlerstein, who is the Wiesenthal Center’s Director of Interfaith Affairs.

On October 3rd, Muhannad Halabi knifed his way into Palestinian hearts. The law student stabbed Rabbi Nehemiah Lavi, Aharon Bennett, Bennet’s wife and two-year-old son in the Old City of Jerusalem. Only the latter two survived. Halabi was immediately shot and killed by Israeli security forces. Within minutes, the martyr’s photo was all over social media; within hours- even before his burial- Halabi’s mother was consoled by a phone call from a woman in Gaza. She had named her newborn boy Muhannad to immortalize the memory of the shahid.

Muhannad The Older, sacrificed himself for a lie – the PA’s sustained fabrication that Israel planned a takeover of the Al-Aqsa Mosque. Muhannad The Younger will likely be weaned on the ideology of the Muslim Brotherhood’s Hamas, in which becoming a martyr attracts Gazan children like becoming a rock star or admission to an Ivy League school would be a dream of an American youngster.

Muhannad's star as a terror-martyr-celebrity is already fading, eclipsed by all the further attacks in Tel Aviv, Jerusalem, Afula, Kiryat Gat, Kiryat Arba, and Herzlia. The Palestinian Bar Association did make Muhannad’s parents proud however, they awarded him a posthumous law degree.

Terror is an abstraction that obscures what is behind the wave of attacks in Israel. Unless we can stop treating it like a bumper sticker that reads, “Terror happens,” we may soon experience Mideast-inspired terrorism on our own shores.

Terror doesn’t just happen. It has to be nurtured and then ignited.

The day before Muhannad stabbed his victims, two cars trolled Highway 60. The spotters drove in one; two Palestinian gunmen rode in the second. They unleashed a fuselage of bullets on Eitam Henkin, a 30 year-old accomplished scholar and his young wife. The murders were celebrated by Palestinians through the customary sharing of sweets.

Dr. Yigal Henkin was remarkably composed and probing at his funeral oration for his brother:

Terror is a tool. The one who uses terror is the enemy. Terror is the enemy's tactic, knives and bullets - its weapons at hand. …Do not fight terror, fight those who dictate it….Behind those murderers there is a society who supports this kind of warfare. A society which supports targeting civilians, a society which supports finishing off a young couple. The murderers are the hangmen. But those who preach that “here is a Jew and therefore he deserves death,” - they will not be imprisoned.

Focusing on lone wolf lunatics to end terrorism is like trying to stop highway carnage by going after cars, not the people who drive them. Cultures of hate, that devalue human life, that serially inflame passions and incite violence –threaten all of us, not just in the Holy Land.

The road to terrorist acts is like an interstate highway system, linked by ideology and Internet technologies. You can start almost anywhere in the jihadi world, and get anywhere else. ISIS (which in August tortured a twelve year-old Christian boy to get his father to renounce his religious beliefs, and then crucified both of them when he wouldn’t), Hezbollah, Hamas, all preach extermination of the other, and promise the glories of martyrdom, even to children. Thus, a member of the Palestinian Authority Fatwa Council broadcast from a mosque: “Have no mercy on the Jews, no matter where they are, in any country. Fight them, wherever you are. Kill those Jews and those Americans who are like them.” A Hamas children’s magazine passes the message to the next generation by teaching that Americans’ hatred and insensitivity “are caused by the Jewish filth … inspired by the Jews’ cruelty, heresy and barbarity.”

This is what PA President Mahmoud Abbas said to his people on Rosh Hashanah eve about Jews:

The Al-Aqsa [Mosque] is ours... and they have no right to defile it with their filthy feet. We will not allow them to, and we will do everything in our power to protect Jerusalem…We bless every drop of blood that has been spilled for Jerusalem, which is clean and pure blood, blood spilled for Allah, Allah willing. Every martyr will reach Paradise, and everyone wounded will be rewarded by Allah.

Some within the Israeli security community argue that Abbas is working to keep the demonstrations from getting worse. Should we be grateful to an arsonist for calling in an alarm to the fire he helped set?

He can hoist flags at the United Nations and be treated as a head of state by diplomats. But Abbas’ words and deeds are not those of a nation builder, but a failed leader who has driven his people on the fast lane of hate and violence. Until a Palestinian leader emerges with the guts to change lanes, peace in the Holy Land will remain a mere billboard on the highway of wishful thinking.

Unpopular: New Poll Packed With Extremely Bleak News for Biden and Democrats
Townhall
Jussie Smollett attorney's closing argument to the jury 'isn't the defense they think it is'
Twitchy
Joe Biden Discusses His Meeting With Putin -- and He Really Shouldn’t Have
Redstate
Jussie Smollett Gets Destroyed During Cross Examination
PJ Media