Phyllis Schlafly
|
Posted: Sep 06, 2016 12:01 AM
Share   Tweet
The opinions expressed by columnists are their own and do not necessarily represent the views of Townhall.com. 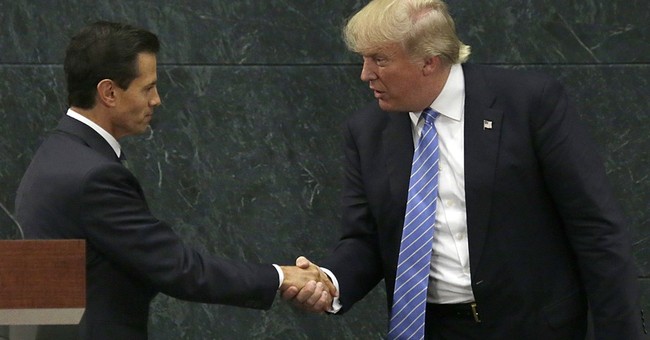 Editor's note: Phyllis Schlafly passed away on September 5 at the age of 92. She will be missed.

Donald Trump’s surprise visit to Mexico, where he met the Mexican president and discussed the many contentious issues between our two countries, reminds me of President Reagan’s important trip to Geneva in 1985.  Reagan was more than willing to sit down with the Communist leader in an effort to build a personal connection between the two men without sacrificing America’s vital interests in the Cold War.

The 1985 Geneva summit was highly advertised as a potential showdown between Reagan and Gorbachev, the supposedly reasonable new Soviet leader.  When it was over, Americans realized that behind Reagan’s genial affability was a steely determination to protect our country against the threat from Soviet nuclear missiles.
Just as today’s mainstream media is bent on undermining Trump’s call to put Americans first in our dealings with Mexico, the media of the 1980s (led by ABC’s Sam Donaldson and CBS’s Dan Rather) were overwhelmingly pro-Gorbachev and anti-Reagan in their daily coverage.

Left-wing celebrities from around the world converged on Geneva to support the media narrative that a stubborn President Reagan was refusing to consider Gorbachev’s reasonable proposals for world peace.  Congresswoman Bella Abzug, actress Jane Alexander and the inevitable Jesse Jackson were giving daily interviews.
I led a delegation of 25 distinguished women leaders to Geneva to support Reagan and American nuclear superiority.  The media didn’t give us much coverage, but President Reagan telephoned me afterwards from the White House to thank me for our support.

Reagan had been elected on a promise to “win” the Cold War against the Communist forces arrayed against America.  Before Reagan, our country’s foreign policy was controlled by men like Henry Kissinger, who thought victory was impossible and that his job, as he famously told Admiral Zumwalt, was “to negotiate the most acceptable second-best position” for the United States.

After three decades of steady deterioration of America’s place in the world, Trump is the first candidate since Reagan who is comfortable using Reagan’s vocabulary of winning.  Trump has pledged to make America “win” again, instead of being cheated and outmaneuvered by our adversaries and even our so-called allies.
Trump’s visit to Mexico recalls Reagan’s trip to Geneva in other ways, too.  At both meetings, there was one signature position on which the American refused to budge.

Reagan’s no-surrender pledge was his unwavering commitment to the Strategic Defense Initiative, that is, to build and deploy a system to shoot down Soviet nuclear missiles headed for our cities.  With Trump, it’s his rock-solid promise to build “an impenetrable physical wall” on our southern border.
Both Reagan’s and Trump’s signature ideas were purely defensive weapons to which no country could have any legitimate complaint.  Reagan’s SDI was a non-nuclear weapon whose only function was to destroy or deflect incoming nuclear missiles.

Reagan stuck to that non-negotiable position at the summit with Gorbachev the following year in Reykjavik, Iceland.  As we now know, that’s when Gorby realized he could never win an open competition with the United States, so that his “acceptable second-best position” was the dissolution of the USSR over the next five years.
Likewise, Donald Trump’s wall is not a provocative, but a neighborly idea to stop the rampant illegality that harms both nations along the U.S.-Mexico border.  With no legitimate objection to erecting a fence, wall or other physical barrier between our two countries, Mexico should be grateful for Trump’s leadership and even agree to help pay for it.

The value of a wall begins with stopping “murderers” and “rapists” from freely entering and re-entering our country with impunity, as Trump mentioned when he announced the start of his campaign last year, but it doesn’t stop there.  Felony assault by motor vehicle is another deadly crime that seems to be rampant by illegal aliens driving recklessly without the licenses or insurance that law-abiding Americans take for granted.

The wall would also stop the plague of heroin that has exploded during the last few years of the Obama administration.  Deaths from heroin overdoses surpassed deaths from car crashes last year and will hit a new record this year.  Most U.S. heroin is delivered by Mexicans working for the drug cartels.

Of course, most Mexican immigrants are not murderers, rapists, drunk drivers or drug dealers.  But even the good, hard-working people who come here from south of the border, both legally and illegally, have such low education and skills that they can’t survive economically without massive public subsidies to provide for the care, food, shelter, health care, education and welfare of their children.

Voters finally have the opportunity to choose a president who will make America first by securing our border and ending one-sided trade deals that favor foreign workers rather than our own.  Trump’s strong stance in his meeting with the Mexican president demonstrates that Donald Trump is the “choice, not an echo.”