Stop Disease at the Border 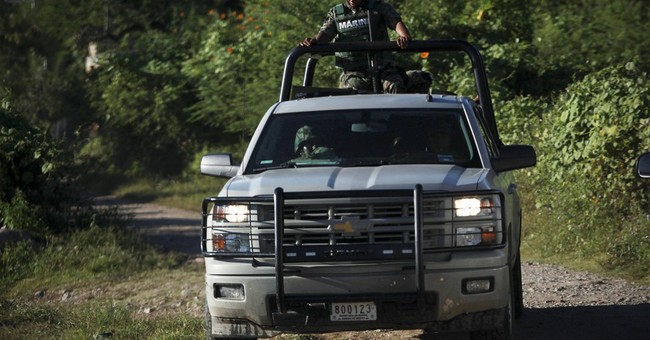 Trending
Americans against amnesty are not only worried about unemployed Mexicans crossing our southern border illegally to take U.S. jobs. More than ever, we need the fence that Congress voted for and President George W. Bush made a television photo event when he signed it into law.

Rep. Duncan Hunter (R-CA) said that at least 10 ISIS thugs have crossed our southern border. Hunter added, if we caught 10, "you know there are going to be dozens more that did not get caught by the Border Patrol."

Rep. Tom Cotton (R-AR) says the Islamic State, ISIS, is actively working with Mexican drug cartels to infiltrate and eventually attack Americans. ISIS has told us it wants to extend a caliphate over America, so why is anybody surprised that they are doing what they said they wanted to do?

The problem of invasion across our border is no longer just a jobs problem. It's a national security problem, a welfare problem, a public school problem and a dangerous disease problem.

It's not a problem of accepting a few lost teenagers who arrived unannounced and demanded admission. It's a problem of our public schools suddenly being invaded by thousands of young adults who have never been to any school, who are not familiar with basic hygiene, who can't read or write, who don't speak English or even familiar Spanish (but speak one of 21 different Spanish or Indian dialects) and who may carry new diseases such as EV-D68.

It's a problem of requiring our newly burdened health care establishment to deal with diseases that are not common in the United States. During the summer we suffered an outbreak of EV-D68, a polio-like enterovirus. The outbreak is widespread in Central America, from which many of the illegal kids came.

The CDC reports that at least 538 people, mostly children, in 43 states and the District of Columbia became ill with EV-D68. At least five U.S. children infected with EV-D68 died this fall.

Obama has refused to bar entry to the United States by people from countries where Ebola is epidemic. The problem we face is not just one African who entered our country and then died from Ebola. It's a national health problem that has made our health care personnel carriers of a fatal African disease endangering Americans who never went to Africa.

Obama sent thousands of U.S. troops to Liberia, a country stricken with Ebola. He ignores the danger to our American troops and also to other Americans when these servicemen and women return home. The safety of the American people is less important to him than posing as a world citizen.

Marine Corps General John F. Kelly, commander of the U.S. Southern Command, told the National Defense University in Washington, DC that, if Ebola comes to Central America, "it will cause a panic," that "it's literally 'Katie bar the door,' and there will be mass migration into the United States."

Meanwhile, the Centers for Disease Control reports that "By the end of the year, there will be 14 million people infected with Ebola and 62 percent of them dying."

Why doesn't Obama impose a travel ban on persons flying here from Ebola-infected countries? It's not enough to take the temperature of airline travelers and have them fill out a written form because we know that the African who died from Ebola after arrival in the U.S. had lied on his form.

Mark Krikorian points out that the U.S. has issued 13,000 visas for travel to America from the three most Ebola-infected West African countries: Liberia, Sierra Leone and Guinea. Will Obama let those 13,000 people into America?

Dr. Anthony Fauci, the specialist on infectious diseases at the National Institute for Health, is very much opposed to closing the U.S. border. Instead, he is blaming the Dallas Hospital, saying, "They dropped the ball" by failing to determine the patient's "travel history."

Dr. Thomas Frieden, head of the CDC, blamed a supposed "breach of protocol" for a Dallas nurse getting Ebola, and called for an investigation of how she could get the disease while following full CDC precautions.

According to Louisiana Gov. Bobby Jindal, the CDC was given nearly $3 billion to fight infectious diseases but spent only 6 percent of that for its declared purpose. A much larger share of the money was spent on community transformation grants to increase access to healthy foods and promote improvements in sidewalks to make it easy for people to walk and ride bikes.

We are hearing some common sense from a few members of Congress. House Homeland Security Chairman Michael McCaul called for barring entry into the United States for people from West African countries wrestling with Ebola, and also temporarily suspending the 13,000 visas that have already been issued to people in those countries. Sen. Ted Cruz said it best: "Our priority should be protecting the American people and preventing Ebola from coming here."