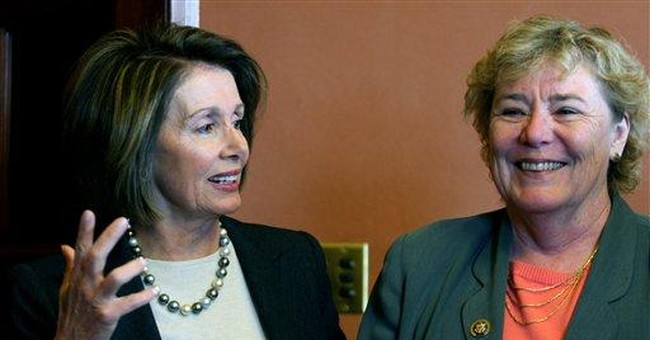 Women didn't vote for Democratic candidates in the November election in the numbers expected, so President Barack Obama and Senate Majority Leader Harry Reid want to woo them back into the fold by passing the Paycheck Fairness Act (PFA) in the lame duck session. We don't need this: It's a job killer, not a job creator.

The Paycheck Fairness Act (S.3772) would amend the Fair Labor Standards Act of 1938 and the Equal Pay Act of 1963. Those laws have produced fair results for many years.

Under current law, Title VII entitles an employee to win back pay if the employer intentionally engaged in discriminatory practices. PFA would allow unlimited compensatory and punitive damages to be awarded by judges and juries, even without proof of the employer's intent to discriminate.

The Equal Pay Act currently requires that meeting the test of equal pay for equal work requires that the employees being compared work in the same physical place of business called an establishment. The PFA would redefine the word "establishment" to mean workplaces in the same county or political district.

The PFA would invite the Equal Employment Opportunity Commission (EEOC) to develop "rules of guidance" to define "establishment" even more broadly. This leaves the door open for the EEOC to compare and force the equalization of pay for a woman's job in a rural area with a man's job in an urban area where the cost of living is much higher.

That obviously would increase employment costs in lower-cost areas. Fewer people would be employed, and some of those jobs could be shipped overseas.

The PFA would eliminate the proven successful, Supreme Court-endorsed system for determining pay discrimination, known as the Interpretative Standards for Systemic Compensation Discrimination. The PFA would replace it with the Equal Opportunity Survey, which has been proven to be highly inaccurate.

Increasing class-action business for trial lawyers means the Democrats are pandering to their important donors. These additional costs imposed on employers will also result in shipping more jobs overseas.

Elaine Chao, secretary of labor under President George W. Bush, correctly called the PFA a "job killing, trial attorney bonanza." She said it would encourage employers to view female applicants as instigators of lawsuits instead of contributors to productivity.

"Equal work" can be judged by objective factors such as experience, time in the labor force, hours worked per week, working conditions and the work actually done. "Worth" is a very subjective concept. Most people probably think they are worth more than they are being paid and deserve a raise.

The Obama feminists recite the tiresome mantra that women are paid only 77 cents for every dollar paid to men. That's completely false because it doesn't take into account that men take many high-risk and unpleasant jobs, suffering 90 percent of occupational fatalities, so they should earn more.

Each of us is paid a compromise between what we think we're worth and what someone is willing to pay. Those millions of decisions add up to what we call the private enterprise system and the free market economy.

Why are football and baseball players paid more than the president? Lawyers more than ministers? Rock stars more than musicians in major symphony orchestras? Should government decide what people are worth and bias the pay scales based on gender?

If it were really true that businesses pay women less than men for the same work, then cost-conscious bosses would hire only or mostly women. Since that doesn't happen, there must be other factors.

The proper role of government is to provide equal opportunity, not preferential treatment based on warped social theory, especially when the feminist arguments are so demonstrably false, and their demands will increase unemployment.