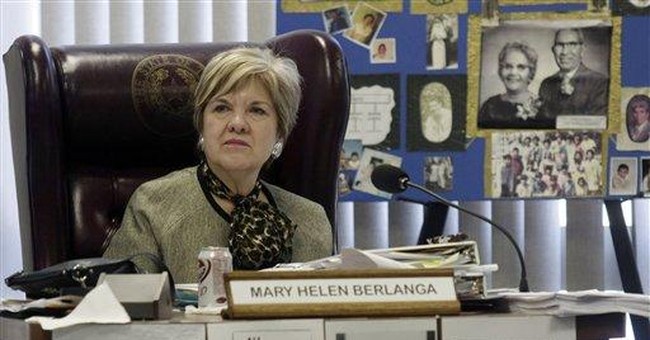 "Don't Mess With Texas" is a popular slogan in our most prosperous state. By a 10-to-five margin, the Texas State Board of Education (SBOE) just told liberals to stop "messing" with social studies textbooks.

For years, liberals have imposed their revisionist history on our nation's public school students, expunging important facts and historic figures while loading the textbooks with liberal propaganda, distortions and cliches. It's easy to get a quick lesson in the virulent left-wing bias by checking the index and noting how textbooks treat President Ronald Reagan and Sen. Joseph McCarthy.

When parents object to left-wing inclusions and omissions, claiming they should have something to say about what their own children are being taught and how their taxpayers' money is spent, they are usually vilified as "book burners" and belittled as uneducated primitives who should allow the "experts" to decide. The self-identified "experts" are alumni of liberal teachers colleges and/or members of a left-wing teachers union.

In most states, the liberal education establishment enjoys total control over the state's board of education, department of education and curriculum committees. Texas is different -- the Texas State Board of Education is elected, and the people (even including parents!) have a voice.

Texas is uniquely important in textbook content because the state of Texas is the largest single purchaser of textbooks. Publishers can hardly afford to print different versions for other states, so Texas curriculum standards have nationwide influence.

The review of social studies curriculum (covering U.S. government, American history, world history and economics) comes up every 10 years, and 2010 is one of those years. The unelected education "experts" proposed their history revisions, such as eliminating Independence Day, Christopher Columbus, Thomas Edison, Daniel Boone and Neil Armstrong, and replacing Christmas with Diwali.

After a public outcry, the SBOE responded with common-sense improvements. Thomas Edison, the world's greatest inventor, will be again included in the narrative of American history.

Schoolchildren will no longer be misled into believing that capitalism and the free market are dirty words and that America has an unjust economic system. Instead, they will learn how the free-enterprise system gave our nation and the world so much that is good for so many people.

Liberals don't like the concept of American exceptionalism. The liberals want to teach what's wrong with America (masquerading under the code word "social justice") instead of what's right and successful. The SBOE voted to include describing how American exceptionalism is based on values that are unique and different from those of other nations.

The SBOE specified that teaching about the Bill of Rights should include a reference to the right to keep and bear arms. Some school curricula pretend the Second Amendment doesn't exist.

Texas curriculum standards will henceforth accurately describe the U.S. government as a "constitutional republic" rather than as a democracy. The secularists tried to remove reference to the religious basis for the founding of America, but that was voted down.

The Texas Board rejected the anti-Christian crowd's proposal to eliminate the use of B.C. and A.D. for historic dates, as in Before Christ and Anno Domini, and replace them with B.C.E., as in Before the Common Era, and C.E.

The deceptive claim that the United States was founded on a "separation of church and state" gets the ax, and rightfully so. In fact, most of the original 13 colonies were founded as Christian communities with much overlap between church and state.

History textbooks that deal with Joseph McCarthy will now be required to explain "how the later release of the Venona papers confirmed suspicions of Communist infiltration in U.S. government." The Venona papers are authentic transcripts of some 3,000 messages between the Soviet Union and its secret agents in the United States.

Discussions of economics will not be limited to the theories of Karl Marx, John Maynard Keynes and Adam Smith. Textbooks must also include Milton Friedman and Friedrich von Hayek, two champions of free-market theory.

History textbooks will now be required to cover the "unintended consequences" of Great Society legislation, affirmative action and Title IX legislation. Textbooks should also include "the conservative resurgence of the 1980s and 1990s."

Texas textbooks will now have to mention "the importance of personal responsibility for life choices" instead of blaming society for everything and expecting government to provide remedies for all social ills.

It's no secret that the people who control public schools are at war with our nation's history, culture and achievements. Since taxpayers foot the bill, it is long overdue for a state board of education to correct many textbooks myths and lies about our magnificent national heritage and achievements.

After a public comment period, a final vote on the Texas standards is expected in May.