Phil Kerpen
|
Posted: Jan 30, 2016 12:01 AM
Share   Tweet
The opinions expressed by columnists are their own and do not necessarily represent the views of Townhall.com. 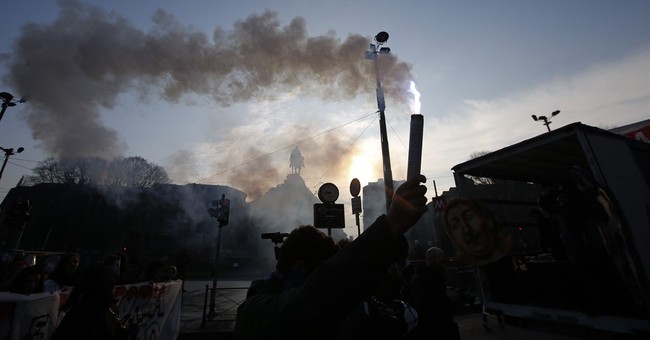 After a lengthy and heavily contested regulatory process, a final rule deeming vapor products to be subject to pervasive FDA regulation is currently in the White House Office of Management and Budget for a final review before it is published and takes effect this year.  Leaks of the purported final rule suggest it remains deeply flawed and will impose a draconian, one-size-fits-all model that risks disrupting the fast-growing vapor industry and denying access to products that pose vastly less health danger than conventional tobacco cigarettes.  Unfortunately, in the final negotiations over last year’s omnibus bill a provision addressing this issue was dropped, but that should not be the last word on the issue from Congress.

Mitch Zeller, the FDA’s top tobacco regulator, told Congress “If we could get all of those people [who smoke] to completely switch all of their cigarettes to noncombustible cigarettes, it would be good for public health.”

Indeed, vapor products are displacing regular cigarettes.  The most recent data from the CDC show the percentage of the adult population that smokes has dropped six consecutive years, from 20.6 percent in 2009 to 14.9 percent in the first half of 2015. An estimated two million ex-smokers are using vapor products.

So we’re on the right track, and Zeller warned: “Let’s not lose our focus on what the primary cause is for those 480,000 avoidable deaths each year—it’s primarily burning, combusting cigarettes.”

Unfortunately, his agency is poised to do precisely that with its deeming rule.

He’s referring to a feature of the rule that sets a grandfather date of February 15, 2007 – effectively denying grandfather status to nearly every vapor product on the market and forcing each to go through a lengthy approval process or be pulled from the market within 24 months.

That date and timeline were established by the Family Smoking Prevention and Tobacco Control Act, passed by Congress in 2009 – and it grandfathered all but the very newest cigarette products.  By now deeming vapor products subject to regulation seven years later, the FDA is subjecting these safer products to more draconian regulation.

Jan Verleur, co-founder and CEO of VMR Products, a major manufacturer of vapor devices, said: “It’s essentially a death sentence for industry. It could be held up in litigation for many years.”

Once the rule is final, manufacturers would be required to submit to the FDA, for each product, a Premarket Tobacco Application (PMTA) or a Substantial Equivalence (SE) report.  The PMTA process is complex and expensive and would be challenging for all but the largest manufacturers – the major tobacco companies – to navigate.  The SE choice depends upon showing that a predicate product is already approved, but vapor technology is new and rapidly evolving, ruling this option out. The investment driving that innovation would be chilled by time and expense of submitting every product for regulatory approval – and the agency already has a substantial backlog.

The solutions are simple but will require Congress to act quickly, because the rule currently sits at OMB and could be published any day.  On the next appropriate must pass vehicle Congress should include language that either delays the rule completely or fixes its most egregious flaws – the imposition of an inappropriate grandfather date and an insufficient approval period.  Failure to do so will result in regulating vapor more strictly than cigarettes, destroying thousands of small businesses, and, tragically, likely increasing tobacco-related sickness and death.