The Hand of Man and Delusions of Grandeur

Phil Harris  |  Jul 22, 2008
The opinions expressed by columnists are their own and do not necessarily represent the views of Townhall.com.
Top Columns
Trending on Townhall Media 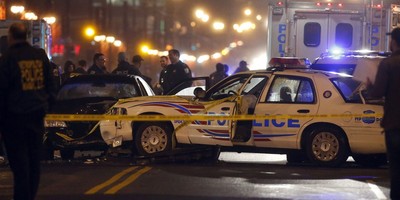 Zeus and Thor are sitting on the tailgate of a pickup truck near the top of Mount Olympus. Thor is flinging bolts of lightning at hapless humans, who scurry frantically in all directions, looking for cover.

Thor scores a hit, causing one pitiful victim to do a triple back flip, landing with a bounce in a smoking heap. Zeus blows beer through his nose and falls on the ground in a fit of laughter. Immortal life doesn’t get any better than this, they agree.

It is a god-scale version of the good-ole prairie dog hunt, and there was a time when such tales seemed plausible for explaining tragedy. After all, there must be “someone” to blame when life becomes difficult and painful.

Having a grasp of the science behind natural forces like thunder and lightning is a good thing. Having such knowledge can sometimes give us half a chance to protect ourselves. Well, maybe the chance of not-being struck by lightning is not so much improved regardless of how much we understand it. That fate depends a great deal on being in the wrong place at the wrong time.

Modern man has developed an annoying characteristic; an over-bloated, self-aggrandized view of his capabilities. Educated people have come to believe that we now belong on those god-pedestals of old. The thrill of understanding a few principles behind the forces of nature has caused man to lose all perspective on his puniness.

I used to enjoy watching scientific docudramas on cable television, but these last few years have made me less apt to waste my time. Many begin with stunning photography and interesting observations about whatever-it-is, but then they invariably launch into wild speculations; declaring how man has changed whatever-it-is and because of this, life will soon come to a tragic end.

This knowledge fueled ego-mania has killed all perspective of scale, especially when discussing the precarious nature of what makes our planet a life-enabling oasis in the Universe. For example, the atmosphere is indeed a very thin layer of gas, especially when compared to the bulk of the planet. But when you overlay the scale of that thin layer of gas onto the miniscule pile of flesh that is all of mankind, the atmosphere is pretty darned enormous.

The world today is filled with Screaming Mimi, sky-is-falling, doomsday seekers posing as scientists. I say they are posers, because they frequently leap far beyond the narrowly selected data which they choose to collect and study. They are not ashamed to extrapolate complex theories for what has occurred in Earth’s history. But worse, they will point to the infinitesimally small period of man’s presence and declare the data has changed dramatically.

Few real scientists are at work it seems, no matter how many letters these posers write behind their names. They have given up the pursuit of real science and have instead become little more than numerologists, looking to foretell the future by finding coincidence in numbers, just as numerologists find intricate details through mathematics in the religious texts.

The unfathomable energy in, and the sheer scale of the planet and atmosphere are beyond the ability of man to impact significantly. For example, the last eruption of the Yellowstone Caldera, thousands of years ago, is estimated to equal the equivalent explosive force of 2,000,000 megatons of TNT. This single geological event can be compared to the entire inventory of deployed nuclear weapons in the world, which have a total explosive force of just 12,000 megatons of TNT. (Source: “The Declining Power of Post-Flood Volcanoes” by Steven A. Austin, Ph.D.)

If mankind decided tomorrow that life on Earth must be destroyed (even just human life), he would fail pathetically and would accomplish little more than making a big mess. The mess he made would then be cleaned up by Mother Nature in the blink of a generation or two.

The mere elevation of knowledge in exchange for the ever mischievous antics of the Greek gods has not bestowed god-like powers on man. It is unfortunate that the most learned amongst us, have taken to delusional fantasies of grandeur, and would have all of us fear their predictions of doom just as man once feared the scorn of the gods.