Trump Supporters Have Good Reason to Be Mad

Peter Morici
|
Posted: Apr 13, 2016 1:32 PM
Share   Tweet
The opinions expressed by columnists are their own and do not necessarily represent the views of Townhall.com. 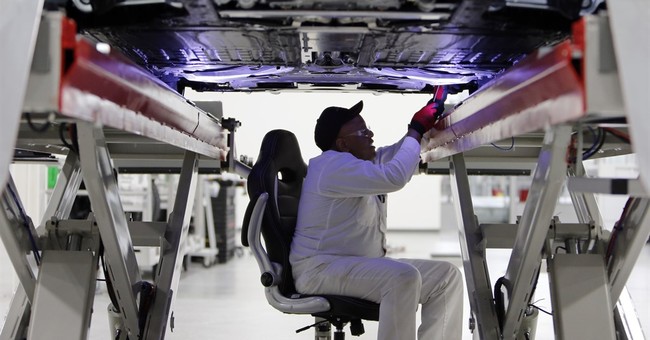 Men supporting Donald Trump have reason to be mad as hell. The economy has turned against them, and policies advocated by Democrats and tolerated by mainstream Republicans make their circumstances worse.

Trump does best with voters having less education, and the shift away from manufacturing toward service activities decidedly disadvantages them.

At the turn of the century, factories employed more workers than education and health care combined or professional and business services. Nowadays the latter two groups of industries both employ millions more Americans than those making things.

While many positions in education, health care and professional and business services pay well, those often require a college or advanced degree or expensive specialized training beyond high school, and nowadays girls do better in school than boys. And the grimy environment of many factories was appealing to men, a lot of jobs in the abovementioned sectors are as attractive or even more appealing to women.

Hence it is no surprise that the fortunes of women have been improving—the feminist revolution and rise in female labor force participation notwithstanding—and the nation now confronts a crisis of despondent men.

Nearly 7 million men, between the ages of 25 and 54, are neither employed nor looking for work.

Manufacturing has been a victim of its own success—productivity growth in manufacturing has outstripped other sectors of the economy creating a natural migration of job opportunities from factories to service—but international and domestic policies pursued by presidents dating back to Kennedy have exacerbated the plight of men without a college degree.

Free trade agreements have been advertised as jobs creators but the facts simply belie that claim. Whereas exports create jobs, imports destroy even more of them. The United States has a trade deficit on goods and services combined exceeding $500 billion. That kills 4 million jobs directly and at least another 2 million including from lost spending of workers initially displaced.

Manufacturing accounts for the lion’s share of the trade gap—especially goods from China and elsewhere in Asia that are often subsidized by national governments and benefit from artificially undervalued currencies. Presidents Bush and Obama have talked about fixing those practices, but the trade agreements they bring home make matters worse.

The South Korea Free Trade Agreement implemented on Obama’s watch has increased the trade deficit by more than $15 billion dollars and killed about 120,000 jobs—mostly in manufacturing.

Similarly, Washington has largely left assisting manufacturing to the states, which have fewer resources, while it has ramped up subsidies and shifted job opportunities to education and health care.

While Obama and Hillary Clinton indignantly campaign about a gender gap in pay—a phenomenon criticized as a statistical fraud—more boys are dropping out of high school than girls, and colleges grant about 60 percent of their degrees to women.

We never hear a word from Democrats about fixing the gender gap in education. Instead, they champion programs that would push males out of service jobs where they do well—such as computer coding—and stand by idly while liberal high-tech executives engineer programs to retrain unemployed women that are closed to men.

Mainstream Republicans, while leaning against activist Democratic prescriptions to intervene directly in the jobs market and wage setting, have said little about this discrimination or the crisis facing men.

No surprise, Trump rails against political correctness and barks misogynic slurs but to men without a college education and the women whose fortunes are linked to them, Hillary Clinton’s endless chanting about gender are like a red flag to a bull. The complicity on trade and gender issues by Republican governors is the likely reason why they did so poorly as a group in the primaries.

To Trump supporters, Hillary or Kasich in 2016? Only if you hate your son!