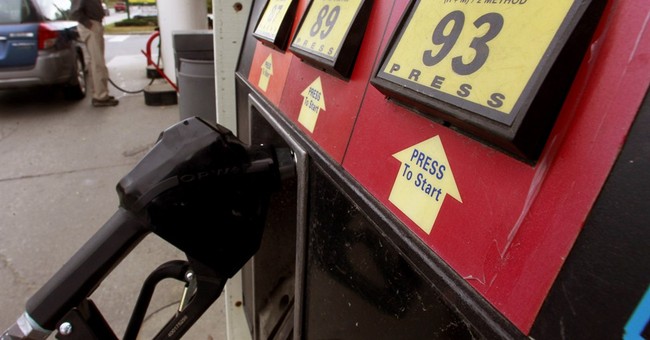 Falling gas prices add to holiday cheer, but those are not an unvarnished good for the U.S. economy—thanks to bad economic policy.

Oil selling at about $65 a barrel oil prices gives consumers and many businesses a lot of additional buying power, but it also puts a damper on the U.S. oil and gas boom.

For many U.S. wells, the breakeven price is much lower—for some $40 a barrel—but in the Texas Panhandle, Permian Basin and North Dakota’s Bakken fields, it can be as high as $75 to $80.

For now, U.S. oil production is likely to continue rising because once fields are built, revenues need only cover day-to-day operating costs even if producers don’t recoup initial development costs. Going forward producers will invest less in new drilling, and sales of drilling equipment have already started to drop.

The United States still imports more than 5 million barrels a day, and cheaper foreign oil adds about $75 billion to consumer purchasing power. However, the falloff in drilling activity will significantly subtract from the resulting pop to GDP and one million additional jobs some economists are predicting.

Restrictions on new pipeline development—both Keystone and other east-west projects—are forcing North Dakota producers to ship by rail millions of barrels to East Coast refineries. This adds as much as $10 a barrel to handling and shipping costs, greatly increases environmental and insurance risks, and makes new U.S. drilling projects more vulnerable to prices in the $60 to $70 range for the next several years.

U.S. producers have made broad gains in exploration and development efficiency—lowering breakeven prices substantially—but to exploit those, the oil and gas sector needs for Washington to acknowledge the facts. Pipeline development benefits both the environment and energy independence.

Japan and the EU are more dependent on imported oil and should benefit even more from lower oil prices. However, various forms of stimulus—ranging from cheaper currencies against the dollar to low interest rates and central bank bond buying strategies—have failed to revive their moribund economies because both suffer from low birthrates and aging populations, onerous labor market regulations and other government policies that stifle business investment.

Government policy failures are also undermining growth in China, Brazil and other developing economies. Those too precipitate cheaper currencies against the dollar.

Together these conditions make U.S. exports more expensive and imports cheaper on American store shelves, and widen the U.S. trade deficit. All subtract from the benefits the U.S. economy may expect from cheaper oil imports.

Lower oil prices may instigate instability in places like Russia, Venezuela and Iran, where rogue regimes heavily depend on petro dollars to finance their governments and imports. That cannot help but add to U.S. security headaches and costs. Washington can either cut entitlement spending—don’t count on President Obama doing that—or more likely, further trim investments in infrastructure, R&D and the like.

Cheap oil can help revive the industrialized economies but not in the face of pervasively dumb economic policies, but that has been the continuing story of this economic recovery.

President Obama keeps telling us the Keystone pipeline will only take Canadian oil to Gulf ports and create only a few thousand construction jobs, when in actual fact it—along with other pipelines the Administration is blocking—would more effectively carry American oil to Gulf and East Coast refineries, support increased U.S. oil production and manufacturing jobs, and wean U.S. consumers from imports that support terrorism.

When the leader of the Free World is so blind to facts and deaf to reason, don’t call economists dismal—save that appellation for the reasoning from the Oval Office.

Peter Morici is an economist and business professor at the University of Maryland and a national columnist. He tweets @pmorici1