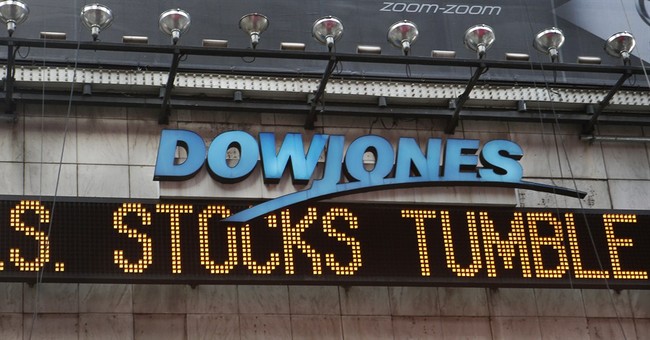 Wall Street may be in a panic, but ordinary investors should not sell their stocks.

A recession in Europe, slower growth in China, falling oil prices, and prospects the Federal Reserve will raise short-term interest rates in 2015 are keeping money managers awake at night. However, in recent months, conditions have not changed as much as headlines suggest.

The euro has the continent in a straightjacket. Lacking national currencies, Italy and other Mediterranean states must endure falling prices and high unemployment to make their economies competitive with Germany and grow again. No amount of labor market reforms, budget cuts and lecturing from Chancellor Merkel can change that.

U.S. and other multinational companies have adjusted by trimming investments on the continent, and yet another recession in Europe should not much affect their anticipated global profitability.

That’s simply not a significant drop but Chinese growth is shifting to more service-based and technology-intensive activities. This slows imports of industrial commodities, but American multinational companies have lots of opportunities for profits in those emerging industries.

Falling oil prices impose hardships on exporters like Russia, Nigeria and Angola but overall cheaper gasoline is a plus for the U.S. economy by adding to disposable income and consumer spending.

The shift to solar, wind and other alternative energy sources will slow, but the cleaner use of petroleum will be easier to accommodate. U.S. environmental businesses will earn plenty of profits from those opportunities.

Overall, prospects for U.S. growth are solid, and corporate profits should continue up.

A stronger dollar, in the wake of weakness in Europe and China’s continued efforts to export unemployment by suppressing the value of the yuan, weakens U.S. exports and increase imports but it also helps keep inflation in check.

Given Chairwoman Yellen’s preference for more inflation over more unemployment, the Fed is not likely to raise short-term interest rates too much next summer, and it may further delay raising rates in the wake of troubles in Europe and elsewhere.

Also, a good deal of foreign money, seeking safe haven from turmoil abroad, continues to come into U.S. markets, and that will keep mortgage and other long term interest rates from rising too much even when the Fed pushes up short rates.

Most importantly, stocks are not overpriced.

The Standard and Poor’s 500 Index, which encompasses about four-fifths of U.S. publicly traded equities, is currently trading at about 1880 with price-earnings ratio of about 18.32. Over the past 25 years, that ratio has averaged 18.90, and when the index first crossed the 1000 threshold in 1998, it was about 25.

Nowadays, major corporations are flusher with cash and applying digital technologies, use capital more efficiently than in the past. The upshot is permanently lower medium and long term interest rates that could support price-earnings ratios as high as 25 and the S&P index trading at 2500.

Disruptions in the global economy always seem to cause hysteria on Wall Street—even when the fundamentals under stocks are strong—and we may endure a 10 or 20 percent correction before equities rebound and move up further.

However, making a killing by selling now and buying at the bottom is a fool’s journey into poverty.

I don’t know anyone who can time the market and neither does anyone reading this column. Unless an investor needs cash currently tied up in stocks over the next three years, it’s best to sit tight.

Stocks remain the best investment around.

Peter Morici is an economist and professor at the Smith School of Business, University of Maryland, and a national columnist. He tweets @PMorici1