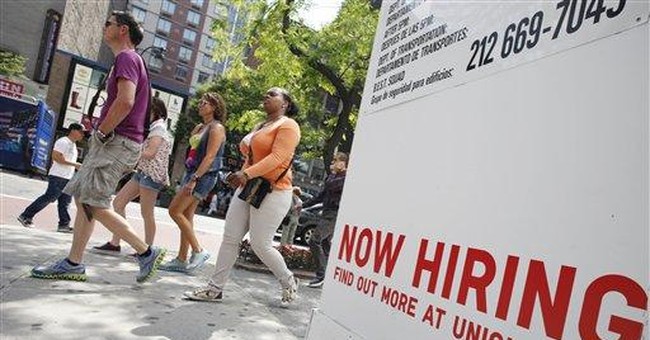 Friday, the Labor Department is expected to report the economy added 213,000 jobs in May. This is line with the pace so far this year and stronger than in 2013, and the Federal Reserve is likely to follow through with plans to raise interest rates.

The labor market remains slack; however, recent consumer price reports indicate inflation is picking up. The Fed will phase out purchases of Treasury and mortgage-backed securities by the end of this year, and feel considerable pressure to raise short-term interest rates in 2015.

These moves will push up rates for mortgage, auto and other consumer loans. However, upward pressure on interest rates should not be enough to derail the bull market for U.S. stocks.

The unemployment rate likely will remain close to its current 6.3 percent. Well below the 10 percent recession peak, it largely reflects a lower adult participation rate. Were the same percentage of adults working or looking for work today as before the financial crisis, the unemployment rate would be 10.4 percent.

Baby boomer retirements are not driving down adult participation—32 percent are in the labor force today, as compared to 23 percent 15 years ago. Rising life expectancies, the loss of benefits-defined pensions, and the disappointing performance of most individual investment accounts are all motivating more elderly to work.

Rather, decent employment opportunities for prime working age adults have not kept pace with population growth. The percentage of Americans ages 25 to 54 that has a job is down to 77 percent from 82 percent 15 years ago, despite a larger share of women in paid employment.

Shrinking opportunities, especially in manufacturing and the building trades, have hit men hard. One out of six between the ages of 25 and 54 is without a job, and many of them have few prospects for finding desirable employment.

Nineteen million Americans over 25 are working part-time. More elderly in the workforce supplementing retirement savings, and the structure of government benefits and regulations contribute to this phenomenon. For example, ObamaCare and the Earned Income Tax Credit (EITC) encourage low wage employees to work part-time to avoid losing benefits, and some employers are limiting workers to less than 30 hours per week to avoid tougher health insurance coverage mandates.

The loss of manufacturing and construction jobs, and growth in part-time employment reflects a broader shift in the economy to low wage jobs and lower household incomes.

Although the economy has restored all the jobs lost during the financial crisis, businesses in industries paying average wages in the bottom third of all employers have added 1.9 million jobs, about the same number as jobs lost in the top two-thirds. Consequently, since 2007, annual inflation-adjusted median household incomes are down about $5,000.

The root cause of poor jobs creation and falling real incomes is slow economic growth that has bedeviled both the Bush and Obama administrations. Whereas during the Reagan-Clinton era GDP growth averaged 3.4 percent, since 2000 the pace has slowed to 1.7 percent.

After GDP contracted 1 percent in the first quarter, forecasters’ growth expect it to rise at a 3 percent rate the balance of this year. However growth in the range of 4 to 5 percent would be needed to provide the 350,000 jobs required each month to bring unemployment down to pre-financial crisis levels over 3 years.

Holding back growth are the trade deficits with China and Japan and on oil, which sap demand for domestically produced goods. Those gaps stem from trade agreements that have exposed U.S. manufacturers to less-expensive imports without opening comparable opportunities abroad for more competitive U.S. enterprises, and the U.S. policy of not developing most of its off-shore oil and gas resources. Altering those policies to cut the trade deficit in half could easily add another one percentage point to growth.

Balancing growth with other social and environmental goals is always difficult, however, the choices voters and politicians have implemented in this century are profoundly suppressing the number of jobs the economy creates and wage levels.

Additional stimulus from the Fed can’t overcome those constraints and create jobs, and inflation heating up will require it to raise interest rates by mid-2015.