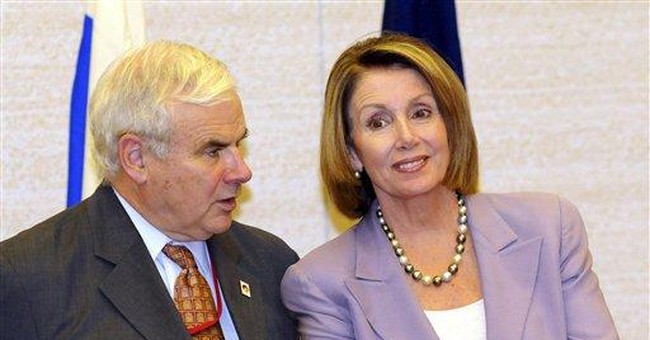 The Speaker's war with the Catholic Church has now spilled over to the Congress. Speaker Nancy Pelosi (D-CA) has challenged when life begins. The Roman Catholic Church says life begins at conception. The Speaker, who claims she is an ardent Catholic, says down through the years the Catholic Church has not been able to agree when life begins. Church authorities have hotly disputed her view. Now a group of Pelosi's fellow House Members has weighed in with a sharply worded letter, organized by Representative Thaddeus McCotter, of Michigan. McCotter is part theologian, part street-fighter. Clearly he is one of the most articulate Members who have graced the Floor of the House of Representatives.

McCotter's letter begins by pointing out that Pelosi claimed she had studied the abortion issue "for a long time." The letter says, "As fellow Catholics and legislators we wish you would have made a more honest effort to lay out the authentic position of the Church on this core moral issue before attempting to address it with authority."

The letter cites Pelosi's interview with Tom Brokaw, which the letter said mangled Catholic Church doctrine regarding the inherent sanctity and dignity of human life. The legislators stated that they are compelled to refute her error.

The legislators said that Tom Brokaw reminded you that the Catechism of the Catholic Church professes the sanctity of human life from conception to natural death. The Catechism says the embryo must be defended in its integrity, cared for and healed, as far as possible, like any other human being.

To this Pelosi responded, "I understand. And this is like maybe 50 years or something like that. So again, over the history of the church, this is an issue in controversy." The Members told Pelosi that her statement demonstrates a lack of understanding of Catholic teaching and belief regarding abortion.

They told Pelosi, "From the apostles of the First Century to Pope John Paul the Great, the Church has reaffirmed the moral evil of every procured abortion. The teaching has not changed and remains unchangeable. Direct abortion, that is to say abortion willed either as an end or a means, is gravely contrary to the moral law." They cite the Catholic Catechism, Item 2271, as their source.

They went on to say that the Speaker's erroneous claim about the Church's opposition to abortion is false and denigrates "our common faith." "...For example, during the reign of Pope Innocent XI in 1679, the Church unequivocally stated it is an error for Catholics to believe fetuses do not have a soul..." confirming the teaching that abortion constitutes an unjustified taking of innocent human life. Members of Congress concluded by telling Pelosi, "To reduce the scandal and consternation caused amongst the faithful by your remarks, we necessarily write you to correct the public record and affirm the church's actual and historical teaching that defends the sanctity of human life."

The Congressmen told Pelosi that they hope she will rectify her errant claims and apologize for misrepresenting the Church's doctrine and misleading fellow Catholics.

Among the 18 McCotter colleagues who signed the letter are House Minority Leader John Boehner, of Ohio; veterans such as Peter King, of New York; Steve King, of Iowa; Dan Lungren, of California; and Phil English, of Pennsylvania. They were joined by newcomers, such as Jeff Fortenberry, of Nebraska; David Nunes, of California; and Michael McCaul, of Texas.

While partisan differences are typical of doing business in the House, it is highly unusual for Members to deliver such a pointed attack on another Member's version of her religion.

Inasmuch as Speaker Pelosi has insisted upon standing by her original statement, it is highly likely that this matter will continue to be an issue as we move into the autumn campaign.