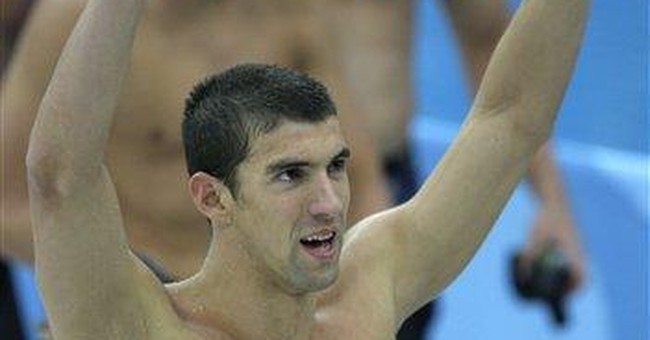 Every generation needs heroes. Young people especially need role models. How blessed we are that the role model of these Summer Olympics is Michael Phelps. Here is a young man who embodies self-discipline, hard work and goal orientation.

It is not so much the world records he shattered. It is not only the number of medals he won. His whole outlook is to be celebrated. He has a commanding presence yet he is the boy next door. True, his endorsements will make him millions. Yet I dare say that is the furthest thing from his mind right now. As I watched this young man mouth the words of our National Anthem it was clear that he is proud to be an American. He loves his country. He says so. No flag burning, no fist raised in protest, no symbolic gesture to blame the USA. On the contrary, this is one true-blue American. How proud can the rest of us be just watching him?

For so long we have seen many people his age who look like revolutionaries and protest about one thing or another. America is evil. America has brought its troubles upon itself. America is to blame for nearly everything. I have no idea of the politics of Michael Phelps. He may not know either. He has been busy, too busy, training for the Olympics. But what does it matter? What we do know about him is that he loves his mom and he loves his country.

I saw two split screen interviews with Mark Spitz, who until now was the athlete who had won the most gold medals at a single Olympics. Spitz held that title since the 1972 Munich Olympics. Spitz praised Phelps to the skies yet Phelps was self-effacing and humble in the interviews. It was Phelps who had Spitz as a role model. Look at what good has come from that.

Those who print Phelps posters will be doing a brisk business. Thousands of young people will hang his poster in their bedrooms. Girls will have his poster as a contemporary sex symbol. Guys will have his poster as their role model. For every record he has shattered there is a young athlete somewhere who thinks he can do a bit better and will be practicing for the next four years to get that chance.

The Lord is good to us. After having endured a parade of protesters and the blame-America-first crowd, we finally have someone to whom all of us can look up. Not a moment too soon.