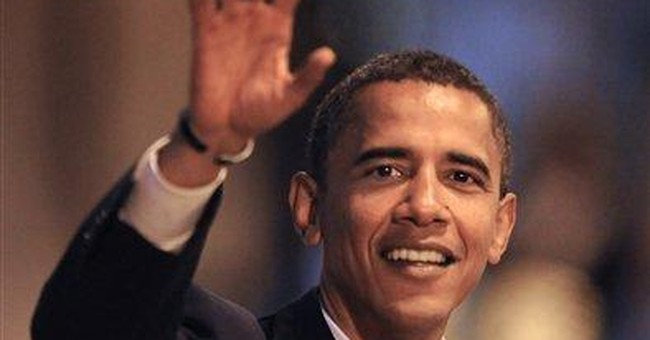 It was an unusually warm January day in Washington as President-elect Barack Hussein Obama took the oath of office administered by longtime Supreme Court Justice John Paul Stevens. Stevens already had administered the oath of office to Vice President-elect Evan Bayh, of Indiana, who had been picked by Obama because he was perceived to be a middle-of-the-road man. Recent reporting has revealed that Bayh shares most of Obama's radical views on issues. The packed Capitol Plaza waited with eager anticipation as now President Obama was about to deliver a rhetorical masterpiece, for which he had become famous.

Have trouble recalling how Obama had bested Senator John Sidney McCain, III? Was it the Electoral College which elected Obama or the popular vote or both? No one seems to remember.

No one seems to remember because there was no election. It began with the presumptive nominee's trip to the Middle East and Europe. The Obama campaign began referring to the candidate as if he already were President. That, while politically risky, is certainly understandable. What is not understandable is how many in the media went along with what the campaign fed them. They began to treat the Senator from Illinois as if he already had been elected President. These are media types who believe that perception is reality. If they can convince the electorate that Senator Obama already is President the election will become a mere formality. In fact, the election is a sort of tolerated nuisance in their eyes.

It might have worked but for the contempt the electorate has for the media. I saw at least half a dozen interviews on cables over the air networks. In every case voters said, "He is behaving as if he were already elected." Most said, "That isn't right." What shocked the reporters, who were stuck hanging around with McCain as he campaigned in small-town America while their anchors reported live from Obama's trip, was how the voters got it. A number identified themselves as Democrats. One even said he was an Obama supporter. The tracking polls confirmed what these voters told the reporters. The campaign believed this trip would give Obama a big bump, putting Senator Obama permanently ahead in what has been up to now a surprisingly tight race with Senator McCain. It didn't turn out that way. In every tracking poll Senator Obama actually lost support. He had opened a six-point lead at the beginning of the trip. Depending on which tracking poll one prefers, Obama's lead decreased to either four, three or two points. Individual states were even more dramatic. In no state did his support increase. In some states where he had gone ahead substantially his support either reversed the trend or is now behind. They include Colorado, Minnesota and Michigan, among others.

There are lessons here for both campaigns and the media. Campaigns must be respectful of the America voter. Campaigns which put their candidate ahead of the candidate's actual position run the risk of appearing arrogant. It would take something cataclysmic for both Obama and McCain not to receive their party's nomination. Yet the voters want to see that it really happens, in Denver and Minneapolis. Lesson for the media? If the media has any chance to regain the credibility it has lost with the American voter it ought to pounce on any campaign which markets its candidate as if he already were President. The media which goes along with this planned deception will hammer its own nails in its own coffin. Extremely partisan voters might like it but the average citizen will be angered by media partisanship.

You can bet that the Presidential candidates' handlers have watched what happened on this trip and I am willing to wager that they will not repeat this mistake again. The real question is: did the media learn the lesson of treating an un-nominated candidate as if he already were elected? I am willing to wager the media has not. 2008 forever will be remembered as the year real journalism died in the USA.