DHS and the Voter Identification Problem 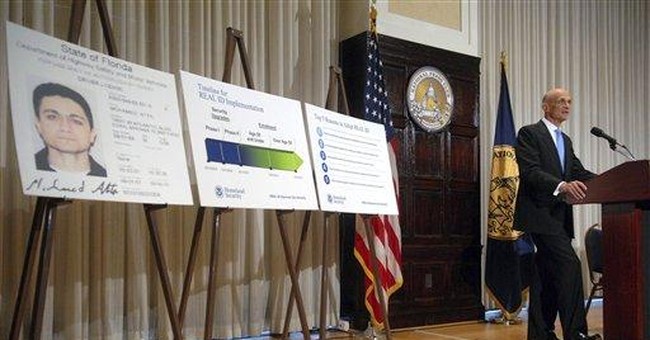 On January 11 the Department of Homeland Security (DHS) issued its final regulations for minimum security standards for state-issued drivers’ licenses and identification cards under the REAL ID Law passed by Congress in 2005. The law was created in response to the terrorist attacks of September 11, 2001 and prohibits Federal agencies from accepting state-issued drivers’ licenses unless they meet the requirements issued by the Secretary of DHS.

The new requirements include a digital photograph and a security measure within the cards to prevent counterfeiting. Also, states must verify each applicant’s personal information and legal status by comparing it against the Federal Social Security database and passport databases. The first deadline for compliance is December 31, 2009, by which time states must verify the lawful status of all applicants “to ensure that illegal aliens cannot obtain REAL ID licenses.” Residents of those states which do not comply with this and other regulations will be unable to enter federal facilities or board commercial aircraft.

What was not included in the new regulations was a controversial provision to implant a computer chip which would store personal information in each driver’s license.

Readers of this column know that I vigorously defend federalism. Federalism is the principle that the United States Constitution enumerates specific powers for the Federal Government and those which are not enumerated are left to the states or individuals. Accordingly, I am relieved that the requirement for the computer chip has been removed. Nowhere does the Constitution authorize the Federal Government to collect and store personal information about U.S. citizens in such an excessive and unnecessary manner as this. Nor do I agree with a national identification card, which many fear the REAL ID may become.

With regard to the driver’s license requirements, the issue is slightly more difficult to parse. States such as Maryland, Oregon and Michigan are considering or have implemented verification of legal presence. Others, such as New York, have tried to give drivers’ licenses to illegal immigrants. Fortunately, the outcry against the idea was so great in New York that the proposal was rejected. That some elected officials would even consider giving illegal immigrants a driver’s license is troubling.

Another problem is voter fraud, reports of which have been increasing in recent years. If the Supreme Court upholds Indiana’s law requiring voters to show photo identification at the polls, then there should be standards for what types of photo identification can be used and rules that guarantee the reliability of those standards. In spite of the outcry from some corners, requiring a photo ID to vote is a good idea. Otherwise there is a tendency for dead people and illegal immigrants to vote as well as some people voting multiple times in multiple districts.

What bothers me about the DHS requirements is that the Federal Government is mandating that states verify legal status using Federal information collections. The Federal Government itself has proven unwilling to pursue or remove illegal aliens from amongst the general public and information in the Social Security database is notoriously unreliable. How many times in recent years have we heard about identity theft? How many times are we warned that our Social Security numbers can be stolen easily? How many times have we heard that illegal immigrants are applying for jobs and receiving benefits using falsified or stolen Social Security numbers? And yet this is the database that DHS wants states to use to verify legal residence so that government-issued identification cards are reliable? The repercussions of this could result in a high number of illegitimate cards issued yet DHS appears untroubled by this fact.

Ensuring that states issue proper, legitimate identification is important because Americans use their drivers’ licenses as proof of ID in many facets of daily life. But the states are doing a relatively good job on their own. When there is a breach of the public trust, as was the attempt in New York, the public outcry has been sufficient to check the power of the state government and assure proper verification of legal residence. DHS needs to put its own house in order before it begins mandating what the states can and cannot do and which sources should be used to verify residency. Otherwise we will end up with more unproductive government “action” intended to appear as though the Federal Government is actively ensuring our security and protecting our borders. The smoke and mirrors must stop.