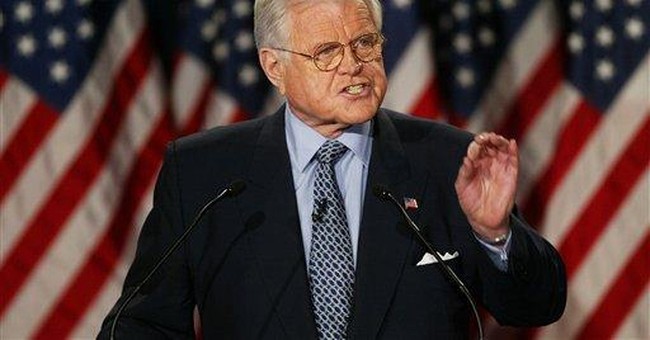 It has been a couple of weeks since the death of Robert Bork, which occurred shortly before Christmas and didn’t really get the news coverage that Bork merited.

Bork died at age 85. In 1987, he became a national headline when President Ronald Reagan nominated him to the Supreme Court. He was a judicial conservative, a “strict constructionist.” He warned about the road America was embarking upon in neglecting its Constitutional principles, and saw doom and gloom ahead. He was grimly pessimistic about America generally, dreading modern liberalism’s grip on the nation. Liberalism, Bork insisted, was pushing America toward decline. We were headed to hell in a hand-basket. A decade after his failed confirmation, Bork authored a bestselling book tellingly titled, ”Slouching Towards Gomorrah: Modern Liberalism and American Decline.”

Bork had seen liberalism up close and full throttle—and at its open-throated angriest. During his unsuccessful confirmation hearings in 1987, he was plainly smeared. He was hysterically and unfairly portrayed by radical abortion feminists and the likes of Senator Ted Kennedy as an abuser and assaulter of women—a Neanderthal, a kind of political/cultural gargoyle. Liberals demonized Bork and railroaded his nomination, ushering in a whole new incivility and politicization to the judicial nomination process. Liberal journalists literally dug through Bork’s trash looking for anything to attack the man; they went to the nearby video store to find out what he rented.

“Hmmm,” they rubbed their hands together hopefully, “any X-rated flicks, Judge Bork?”

Alas, that wasn’t Robert Bork’s universe. They learned that Bork had an affinity not for pornographic film but for “Fred and Ginger” movies.

The left’s assault on Bork was unhinged, a precursor of behavior to come with later judges they disliked, particularly pro-life judges. Liberals were so nasty to Bork that the man’s name has become a verb: When liberals today vilify a conservative Supreme Court nominee, like a Clarence Thomas, we say that the nominee has been “Borked.”

The tributes to Bork at the time of his death revisited this sordid history. But none, to my knowledge, focused on the area where, sadly, I believe he was most prophetic—namely, his pessimism about American life and culture.

I never met Bork to discuss that pessimism, but a former Grove City College student of mine did. It was about 10 years ago. I was speaking at Ave Maria University School of Law in Ann Arbor, Michigan. My former student, Mark, was there. He was taking a class that semester with Judge Bork. He shared with me a dose of the usual Bork cynicism. Looking to buoy Bork a bit, my student optimistically told the judge that America’s future looked good because of promising demographics. He noted that committed evangelicals and orthodox Roman Catholics were having lots of children, whereas secular leftists were not. Surely, he assured Bork, this boded well for the culture, or at least the kind of culture Bork desired.

“No, no,” disagreed Bork. The judge conceded the positive demographics but noted that most of these evangelicals and Catholics send their kids to colleges dominated by these secular liberals, where all the ideals and values the youngsters learned at home and at their churches is rapidly undermined in four years—with the faithful parents unwittingly paying for the undermining. In short order, these conservative Christians support abortion and gay rights.

“We’re doomed,” Bork assured my student. America was on the road to Gomorrah.

For today’s liberals, who call themselves “progressives,” support for abortion has morphed into forcing fellow taxpayers to pay for it—and they plainly smear those who think otherwise as favoring a “war on women.” Their support for gay rights has morphed into gay marriage—with accompanying vitriol slung at anyone who disagrees.

Robert Bork was a man ahead of his time.

Judge Robert Bork, rest in peace—far away from the shores of Gomorrah.