Paul Jacob
|
Posted: Oct 29, 2018 12:01 AM
Share   Tweet
The opinions expressed by columnists are their own and do not necessarily represent the views of Townhall.com. 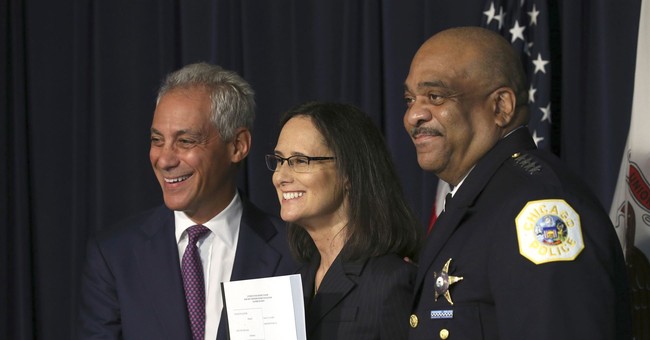 Last week, I became so distracted watching the flocks of pigs soaring through the clouds overhead that I nearly missed the Chicago Tribune report, headlined “Bill Daley, whose brother and father ran Chicago for 43 years, backs a term limit for mayor.”

It is no surprise that this latest Daley launched his bid for the next mayoral election, which will be held in February. What is surprising is the term limits biz.

“I think eight years is enough for a chief executive . . .” he told the Tribune. “Whether you’re doing a good job or bad job, I just think it’s a good thing to do and Chicago is one of the rare exceptions of major cities that doesn’t have a term limit, and I think those cities have done well and I think our politics will do well by that, quite frankly.”

In addition to term limits, Mr. Daley unveiled a pretty comprehensive ethics platform, banning “family members from lobbying or doing business with the city” as well as prohibiting “campaign contributions from city lobbyists.” He pledged not to do any fundraising for himself during his first three years in office and to establish “an independent commission to draw new ward boundaries after the 2020 census instead of letting powerful aldermen control the process as they do now.”

“These needed steps,” Daley argued, “can help rebuild trust with the public and reassure people that the practices of the past will no longer be tolerated.”

Speaking of the past, when Bill’s father was mayor and accused of awarding city contracts to benefit his sons, his father famously questioned, “If a man can’t put his arms around his sons, then what kind of world are we living in?”

How about a less corrupt world?

Unfortunately, Chicago is the recognized capital of corruption. No matter how much voters there want reform, politicians squelch it. After former Democratic Governor Pat Quinn organized a petition drive to place term limits on the ballot for citizens to decide, the crooked city council placed three non-binding issues on their ballot and declared there was no room left for Quinn’s term limits measure.

People in power are often quite iffy about checks on power. This can be seen worldwide. Term limits play a critical role in preventing dictatorship in third world countries struggling with (and against) democracy.

That’s why none other than former President Barack Obama, who rarely if ever spoke about the need for term limits here in the U.S., often inveighed against crooked African politicians breaking established limits.

“Nobody should be president for life,” Obama proclaimed before the African Union in 2015. “Your country is better off if you have new blood and new ideas.”

Even China’s Communist Party recognized the importance of term limits, enacting limits after the epoch of one-man rule under Chairman Mao Zedong. When just last year those term limits were abandoned for President Xi Jinping, throughout the world folks worried it signaled further hits to personal freedom for nearly 1.4 billion people.

Freedom House’s 2018 report, “Freedom in the World,” titles their section on the Americas: “Gains and declines show value of electoral turnover.”

Electoral turnover — you know, like provided by term limits — appears strongly linked to freedom. Their report recognizes the benefits to freedom in Ecuador, where the new president is seeking to restore the term limits overridden by the past leader. Freedom House also noted the disaster befalling Bolivia, where “the constitutional court . . . struck down term limits that would have prevented incumbent leader Evo Morales from seeking reelection. Voters had rejected the lifting of term limits in a 2016 referendum, and international observers called the court’s reasoning a distortion of human rights law.”

There would be term limits for every city, county, and state, and the Congress of the United States, if only the people were permitted to vote on the matter. But resistance by insiders remains strong, and is often quite effective.

We see the resistance in the current Chicago mayoral race. It turns out that Bill Daley also supports term limits for Chicago alderman. Not coincidentally, 14th Ward Alderman Edward Burke, the powerful chairman of the city’s Finance Committee and no less than a 50-year incumbent, to suggest that someone else would make a better qualified mayor.

Describing that 50-year stint in office as “a little ridiculous,” Daley dared to express some common-sense incredulity: “I’m just saying 50 years, half a century, really?”

American voters everywhere — including in Chicago, New York, and Los Angeles as well as in rural states like Wyoming and Montana — fervently want term limits.

This includes a clear majority of every race, both sexes, all age groups, all parties, all political persuasions . . . except, perhaps, the most boutique demographic group. Such as most politicians.