Paul Jacob
|
Posted: Jul 29, 2018 12:01 AM
Share   Tweet
The opinions expressed by columnists are their own and do not necessarily represent the views of Townhall.com. 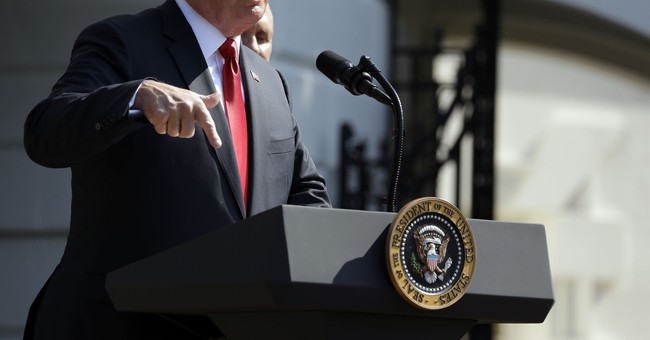 “This trade war is cutting the legs out from under farmers,” said Senator Ben Sasse (R-Neb.) on Tuesday, “and White House’s ‘plan’ is to spend $12 billion on gold crutches.”

Referring to Donald Trump’s tariff brinksmanship with China, Senator Sasse was decrying Donald Trump’s request to Congress for compensatory farm subsidies. Sasse insisted that “America’s farmers don’t want to be paid to lose” — but regardless of what farmers want, we should want free trade.

Tariffs are taxes, after all. Consumers ultimately pay for them all.

Or is it? Could there be more to this story than a failure of trade policy? It seems so. The very next day after Sasse’s public statement, all of a sudden anti-Trumpers found new (and startling) cause to wonder: could we be misunderestimating Trump?

Sure, the senator is right to be alarmed by the “administration’s tariffs and bailouts,” for the president is playing a most dangerous game. Trade wars are not mutually beneficial. Trade is.

And the history of protectionist brinksmanship is definitely not pretty. Sasse himself predicted that Trump’s tariff hikes “aren’t going to make America great again, they’re just going to make it 1929 again.”

Sasse was referring to the passing of the Smoot-Hawley Tariff Act of 1929, which led not only to a spooked Wall Street, but to bank failures and retaliatory protectionism from other countries.

And a worldwide depression.

But Trump himself insists that his agenda isn’t ramped-up protectionism. Amidst all his ballyhoo about the greatness of — the sheer wonderfulness of — tariffs, we have occasionally received hints at a very different agenda. Beneath Trump’s pompous, know-nothing protectionist stance — which we have all heared in his decades-long talk-show blather as well as his campaign’s talking points and bizarre Twitter contributions — there has been this dog-whistle to the economists: that what he really wants is free trade.

And this week President Trump lowered the frequency of his transmission for anyone to hear, from ultrasonic whistle to clear clarion call. As Sasse was decrying the China tariffs and the proposed compensatory subsidies to agriculture, Trump stated that he was pushing the EU to drop all trade barriers and subsidies. And then, on Wednesday, he and the EU’s appointed top banana, Jean-Claude Juncker, publicly declared just that.

“We agreed today, first of all, to work together toward zero tariffs, zero non-tariff barriers and zero subsidies on non-auto industrial goods,” is how Trump put it.

Trump also mentioned a deal for Europeans to import soy from America — which was Trump’s way of addressing the China trade situation, which had been getting worse. Indeed, this week China announced a deal with Russia to purchase soy.

So what is really going on here?

According to classical economics, a country would benefit from a unilateral free trade policy, even if all other countries managed their trade on elaborate protectionist grounds, with high tariffs, subsidies, and all the trappings of mercantilism. But this analysis and policy package has never interested Trump. Indeed, he has decried U.S. official trade treaties like NAFTA as favoring other countries’ producers over ours.

Tellingly, he has never talked about consumers much, and a lot of what he has said was more farrago than genius.

No wonder we have been confused. We free traders expect free trade to be promoted honestly and coherently. It’s our style.

Indeed, it should be obvious by now that clarity has never really been part of Trump’s combative modus. He preaches nationalism — economic nationalism, even damn-fool protectionism — while (apparently) really seeking multilateral free trade. The EU is merely the first to hop on board. Trump expects other nations to get on board, too. Soon.

For all I know, Trump’s status as a secret free trader could even be a secret from himself. It certainly was a secret kept from me.

But if his boisterous, seemingly bumbling, ugly and nationalistic threats and bluster succeed in getting the world’s nation states to take down existing trade barriers and adopt a more consistent free trade posture, the protectionist win-lose jibber-jabber will vanish amidst legitimate talk way beyond win-win. It would be a situation of win-win-win-win….

And we wouldn’t get tired of the winning.